Another day, another liberal journalist scolding White House Press Secretary Sean Spicer. This time, ABC's Jonathan Karl and CNN's Jim Acosta sparred with Spicer over wiretapping and press bias. The Trump aide accused Karl of "mischaracterizing" and chided Acosta for "cherry picking" the conclusion reached by the Senate and House Intelligence Committees that former President Barack Obama did not order a wiretap of Trump Tower during the 2016 election.

KARL: Are you saying that the President still stands by his allegation President Obama ordered wiretapping or surveillance of Trump Tower despite the fact the Senate Intelligence Committee gave no indication it happened?

SPICER: Wait. First of all, he stands by it. You’re mischaracterizing…

SPICER: I know! I understand that. At the same time, they acknowledge the Department of Justice — .Hold on. It’s interesting. Where were you when the same Intelligence Committee said there is no connection to Russia? You didn’t seem to report it then— Hold on, you seem you want to comment, want to perpetuate a false narrative.

At a press confernce yesterday House Intelligence Committee Chairman Devin Nunes said, "President Obama wouldn't physically go over and wiretap Trump Tower. So now you have to decide, as I mentioned to [the press] last week, are you going to take the tweets literally? And if you are then clearly the president was wrong. But if you're not going to take the tweets literally and there is a concern that the president has about other people, other surveillance activities looking at him and his associates — either appropriately or inappropriately — we want to find that out."

Spicer acussed Karl and the media of reporting only the first part Nunes' statement. "You’re mischaracterizing," he said. "Where were you when the same Intelligence Committee said there is no connection to Russia?"

He added, "You don’t include that bottom line that the President said last night that there will be additional information coming forward. There are a ton of media reports that indicate there was something going on during the 2016 election. And I think it’s interesting: where was the question of The New York Times or these other outlets when this was going on? I believe it will."

The press secreaty also accosted Acosta for "cherry-picking" commentary by Fox News' Sean Hannity and Andrew Napolitano. After clarifying the President referred to surveillance, not just wiretapping, Acosta responded, "Sean, you and the President are not saying now ‘wiretapping’ because that’s not true anymore. So we’re going to explain other forms of surveillance. What’s going to be next?"

"I think that’s cute," Spicer replied. "We talked about this for three or four days. What the President said in quotes, wiretapping, he was referring to broad surveillance. And now you’re going back."

Spicer also questioned how Acosta knows national surveillance findings. "Somehow you seem to believe you have all of this information, you read up these things, which I find very interesting," Spicer chastised. "You’re coming to some serious conclusions for a guy with zero intelligence classification."

Here is the March 16th exchange between Spicer and Acosta:

JIM ACOSTA: You were just quoting Sean Hannity there. The House and Senate Intelligence Committees…

SPICER: I also just quoted. I see where you’re going to cherry-pick.

SPICER: You also tend to overlook ‘cause I know you want to cherry-pick it…But you do. Where was your concern with the New York Times report? You don’t seem to be concerned about that.

ACOSTA: We have done plenty of reporting on all of this. 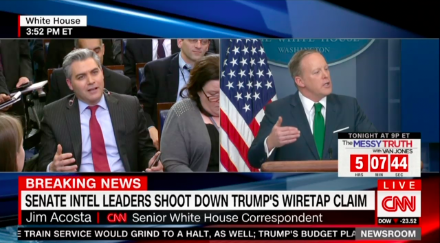 SPICER: No, but you want to cherry-pick one commentator….

ACOSTA: These associates to the President say this has all been looked at…

SPICER: How do you know this! How do you seem to be such an expert on this?

ACOSTA: I’m saying this has been looked at, Sean. There have…

SPICER: Hold on. I’m sorry. Can you tell me how you know this has been, quote, looked at?

SPICER: You’re saying, quote, this has been looked at. Outlets have reported…

ACOSTA: During the 2016 campaign… During the context of the investigation, it sounds like there may have been intercepted communications. House Intelligence Committee chairman did mention that, we have reported that, other networks have reported that on our air and in various publications. What you are refusing to answer, the question you are refusing to answer is whether or not….

ACOSTA: You have a Senate and House Intelligence Committee, both leaders of both parties saying they don’t see any evidence of wiretapping. Now how can the President go on and continue….

ACOSTA: So, it sounds like, Sean, you and the President are not saying now “wiretapping” because that’s not true anymore. So we’re going to explain other forms of surveillance. What’s going to be next?

SPICER: I think that’s cute. At the end of the day. We talked about this for three or four days. What the President said in quotes, wiretapping, he was referring to broad surveillance. And now you’re going back. We’ve talked about this several days ago. The bottom line is the investigation by the House and Senate Intelligence Committee does not have all of information…I think the President addressed that last night. He said there is more to come. This is merely pointing out there is widespread reporting that throughout the 2016 election there was surveillance done on a variety of people that came up.