Bash's remarks come in light of the President attacking Conneticuit Democratic Senator Richard Blumenthal, who met with Supreme Court nominee Neil Gorsuch and publicly stated Trump's pick for the highest court said the President's attacks on the judicial branch--where the Ninth Circuit of the Court of Appeals is expected to rule on Trump's temporary immigration ban against seven terrorist-haven nations-- is "disheartening and demoralizing."

In response to Blumenthal's remarks, Trump fired back and posted on Twitter that Gorsuch's criticism is "misrepresents" what the justice told the senator.

Delaware Democratic Senator Chris Coons defended Blumenthal on Wednesday morning, which Bash summarized as him rhetorically asking, "Are we really in high school?"

"It's more like, you know, maybe my kindergartner. It's hard to believe that we're the -- you have all three branches of government part of this soap opera that is not even made for people who are even remotely adult," Bash added.

Here is the February 9 exchange: 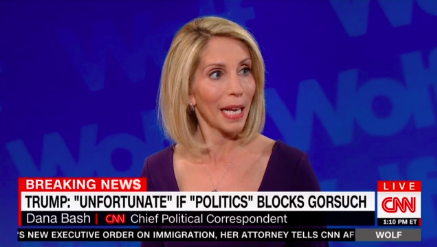 DANA BASH: And now you have not just somebody from the president's opposing party. Also Ben Sasse who, to be fair, has not been the biggest fan of Donald Trump, even though he's a fellow Republican saying the judge said something similar to him. And more importantly, you have the people who are working for president trump to get his nominee confirmed also saying that this happened. Kelly Ayotte, former Senator from New Hampshire who is his sherpa. Ron Bonjean who we've all worked with now doing the communications. Who has a good deal of credibility on these issues, all supporting what appears to be the truth, which is that the judge wanted this out there. Chris Coons, who you have on your program a lot, Senator from Delaware, not a partisan flame thrower said something this morning. Are we really in high school? I would go a step further to say, I think kids in high school act more mature and kind of in the realm of reality than what we're seeing here. It's more like, you know, maybe my kindergartner. It's hard to believe that we're the -- you have all three branches of government part of this soap opera that is not even made for people who are even remotely adult.

WOLF BLITZER: This is at the very end of the photo op that we just saw with the president. And I want to remind our viewers what the president is doing in a tweet and now on camera. He's turning this around. Not only saying the comments senator Blumenthal said were distorting what the Supreme court nominee had to say. But he's now attacking Senator Blumenthal for lying about his experience in Vietnam. Listen to this.