This afternoon outgoing White House Press Secretary Jay Carney took questions from the press corps in his first daily press briefing since announcing his resignation. The questions dealt primarily with the controversy surrounding the release of five high-level Taliban detainees at Guantanamo Bay in exchange for Sergeant Bowe Bergdahl, the sole American POW from the war in Afghanistan, and one who reportedly was judged by the Pentagon.

ABC’s Jim Avila got into a tense exchange with Jay Carney when he asked about the words Obama national security advisor Susan Rice used to describe Sergeant Bergdal’s service in the military. Avila asked Carney how exactly Bergdahl served, as Rice put it, “with honor and distinction.” He gave Carney the opportunity to say the national security advisor misspoke, but he did not.

Carney referred Avila to the Defense Department and told him to look to the Chairman of the Joint Chiefs of Staff in regards to him being successfully recovered. Avila bit back telling Carney,

“My question was not about whether or not there should have been a deal to release him. My question is about the words used to describe his service.”

The veteran Obama spinmeister simply could not defend or deflect the the comments of Susan Rice. Rather he kept referring Avila to the Defense Department and focused on the president’s accomplishment of bringing home an American prisoner of war.

NBC's Kristen Welker tried to ask Carney the same question later on, but Carney responded with the same answers.

The relevant portion of the exchange is transcribed below: 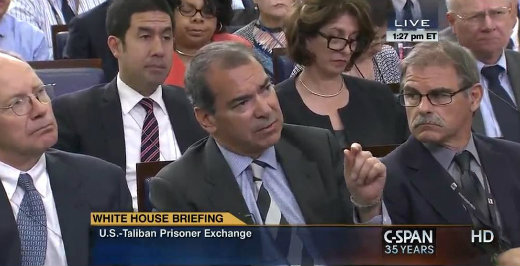 CARNEY: Again you’re citing a circumstance with a lot of “ifs” attached to it. I would refer you to the Defense Department in terms of its assessment and review of the circumstances under which Sgt. Bergdahl was initially detained. I would point you to what the Chairmen of the Joint Chiefs said about his successful recovery and its consistency with an ethos that has long been held here in the United States and by our military.

AVILA: My question was not about whether or not there should have been a deal to release him. My question is about the words used to describe his service. He was promoted during his captivity. Susan Rice said he served with honor and distinction. Is that true? How?

CARNEY: I would certainly refer you to the Defense Department. You noted his promotion. Since this goes to questions about his initial detention the Defense Department is the body that has been reviewing that and will continue to review it now that Sergeant Bergdahl has been recovered. The fact of the matter is he was held captive by an enemy force in an armed conflict with the United States and our allies for five years. Consistent with centuries of past practice we sought to recover him and successfully recovered him.