Samantha Bee used to be a comedian, back when she was yukking it up as one of Jon Stewart's sidekicks on The Daily Show. That seems like ancient history now. These days, Bee has become a full-bore polemicist given to vein-bulging screeds fobbed off as comedy.

Her most recent TBS show on Wednesday night was a textbook example. She focused on two subjects, mass shootings and white supremacist violence, that only a Houdini-scale contortionist could wring for laughs. Her opening monologue consisted of little more than a demand that we "get rid of the guns" while she actually compared President Trump to the monster responsible for mass murder at a Wal-Mart in El Paso.

Following this came her predictably toxic interpretation of the Three-Fifths Clause in the Constitution that Bee cited as evidence that racism is embedded in the nation's foundational document:

It feels like white nationalist violence is the comic-book movies of terrorism - it was always sort of around but now it's literally everywhere and people aren't ashamed of being fans.

That awkward silence? The non-reaction of Bee's presumably like-minded audience to her insipid analogy. Since comic-book superhero movies are now a decidedly lucrative genre in film and just about the only thing keeping Hollywood afloat, surely more than a few people in Bee's audience did not appreciate being compared to Nazis. Bee has spent enough time on stage to know when a joke has bombed, so she quickly moved on:

But despite how white nationalism drives today's culture wars, it hasn't always been like this. I mean, our country has always been racist, that's the literal fine print on the Constitution (wording of Three-Fifths provision shown). But the government actually used to respond to white supremacist terrorism much more actively. When white supremacists assassinated Jewish radio host Alan Berg in 1984, the FBI cracked down and dismantled the group responsible.

Don't hold your breath waiting for Bee to mention that Berg, the target of numerous death threats, was gunned down after being denied a concealed-carry license, according to Stephen Singular's 1987 book, "Talked to Death: The Murder of Alan Berg and the Rise of the Neo-Nazis." Berg's murder was the basis for Oliver Stone's 1988 movie "Talk Radio" with Eric Bogosian. Bee continued:

In the '90s after the Oklahoma City bombing by far-right separatists, Attorney General Janet Reno created a Domestic Terrorism Task Force. It fought white supremacist violence throughout the late '90s and was actually set to meet (pause for effect) the morning of September 11th. (Another pause) Needless to say, the meeting was canceled and the task force didn't meet again for 13 years.

In other words, Reno's task force was so intently focused on a threat perceived as "literally everywhere" in the '90s, to borrow from Bee hyperbole -- while it didn't pay nearly enough attention to an actually worsening and far more perilous threat from radical Islam that murdered nearly 3,000 Americans on 9/11. How awkwardly apropo for this Clinton-era creation to have scheduled a meeting that day, serving only to reinforce the group's irrelevancy.

But it is Bee's glib reference to the Three-Fifths Compromise that is particularly galling and reveals her ignorance and loathe of the Constitution. At the end of the segment, Bee doubled down on her superficial reading of history, describing white supremacy as "our nation's disease, right at the core of its DNA." But as those actually familiar with the Constitution are aware, the Three-Fifths Compromise was the opposite of racist.

First, the actual wording of the provision, from Article 1, Section 2:

Representatives and direct taxes shall be apportioned among the several States which may be included in this Union, according to their respective Numbers, which shall be determined by adding to the whole Number of free Persons, including those bound to Service for a Term of Years, and excluding Indians not taxed, three fifths of all other persons.

At the convention in 1787, delegates from Southern states wanted slaves to be counted no differently than "free Persons" for the purposes of apportionment in the House of Representatives, thereby inflating Southern strength in Congress. Delegates from northern states, citing slaves' legal status in the South as property, did not want them counted at all -- in effect, zero-fifths. Failure to compromise on this divisive issue might very well have split apart the nascent republic.

"It wasn't the racists of the South who wanted to count slave populations less than white populations -- it was the abolitionists of the North," according to former Princeton and Vanderbilt professor Carol Swain in a PragerU video titled "Why the 3/5ths Compromise was Anti-Slavery."

The significance of the Three-Fifths Clause became evident after the first census in 1790, Swain pointed out. The population of Northern states was counted as 1.8 million free whites, compared to 1.1 million free whites and 633,000 slaves in the South. If slaves had been fully counted as Southerners wanted, slave-holding states in South would have bolstered their strength in Congress considerably.

In this scenario, would it have been possible for Lincoln to win the 1860 election, and is the 13th Amendment banning slavery ratified in 1865? Slave-owners in the South wanted slaves counted fully in the census for the very same reason that liberals in current-day America want to flood the country with illegal immigrants -- to increase the power of Democrats in Congress. 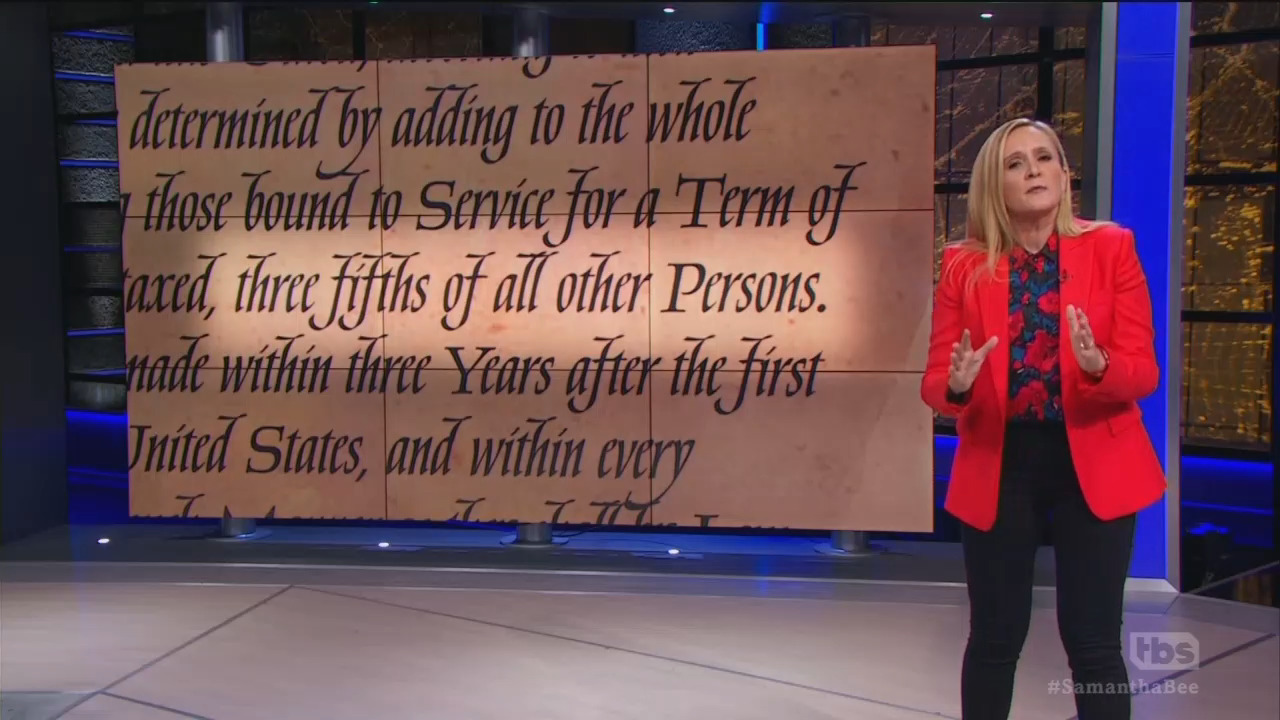 Just as the word "democracy" is absent from the Constitution, so is the concept of race. "Nowhere in the Constitution -- or in the Declaration of Independence for that matter -- are human beings classified according to race, skin color, or ethnicity (nor, one should add, sex, religion, or any other of the left's favored groupings)," writes Heritage Foundation fellow David Azerrad. "Our founding principles are colorblind (although our history, regrettably, has not been)."

"The Constitution speaks of people, citizens, persons, other persons (a euphemism for slaves) and Indians not taxed (in which case, it is their tax-exempt status, and not their skin color that matters)," Azerrad writes. "The first references to 'race' and 'color' occur in the 15th Amendment's guarantee of the right to vote, ratified in 1870. ... Not only does the Constitution not mention blacks or whites, but it also doesn't mention slaves or slavery. Throughout the document, slaves are referred to as persons to underscore their humanity. As James Madison remarked during the Constitutional Convention, it was 'wrong to admit in the Constitution the idea that there could be property in men.' " (emphasis added each time).

A genuinely racist constitution? The one written by Democrats in the Confederacy, with its numerous references to "negro slaves", "negroes of the African race", and "the institution of negro slavery." In contrast to the US Constitution, which included a provision allowing for a ban on importation of slaves as of 1808 (and enacted into law in 1807), the Confederate Constitution specifically forbade any law "denying or impairing the right of property in negro slaves."

Bee isn't the first liberal to get it blatantly wrong on the Three-Fifths Clause, intentionally or otherwise, and she surely won't be the last -- but why her odious venom? All the better to strip the Constitution of its legality, thereby making it easier for liberals to remove such persistent irritants as the First Amendment and the right to bear arms. If the Constitution is widely perceived as racist to its core and hence illegitimate, any of its provisions can be deemed antiquated and expendable.