Is there a more consistently inane presence on cable television than the Reverend Al Sharpton? If there's any doubt, his commentary about a new abortion law in Georgia during Sunday's PoliticsNation on MSNBC should end what paltry debate remains.

Sharpton was describing pushback against the law from a predictable trio of Hollywood malcontents, the ACLU, and Planned Parenthood when his commentary took a turn for the surreal in his weekly "Gotcha!" commentary.

SHARPTON: And now for this week's Gotcha where Georgia is putting politics over business, a growing business that the Peach State really needs. The news this week that Georgia's Republican governor Brian Kemp signed that controversial heartbeat bill banning abortions once a fetal heartbeat can be detected drew swift reaction from the film and television community.

Hollywood stars like Alyssa Milano, Don Cheadle, and Gabrielle Union have already said they plan to boycott the state over the bill. And producer Jordan Peele says he plans to donate proceeds from his HBO series filming in Georgia (Lovecraft Country, a horror series based on a novel of the same title) to the ACLU and former gubernatorial candidate Stacey Abrams to fight this brutally restrictive abortion law.

This means, Governor Kemp, that you can kiss that nearly $3 billion in revenue from film tax credits* you made last year goodbye. And I know Georgia's not alone. Nearly two dozen states have proposed or passed measures restricting abortions. And Republican activists are trying to milk the new conservative majority in the Supreme Court to overturn the landmark Roe vs. Wade decisions, decision that legalized abortions nationwide.

But while these states try to fight over who can be the most barbaric and repressive toward women ...

Only at MSNBC and its morally besotted ideological brethren are efforts to curtail the mass-scale killing of unborn babies deemed "barbaric" -- when it is far more accurate to describe abortion and the industry it has become this way. The same goes for a "brutally restrictive" law restricting brutality against the unborn.

SHARPTON: ... remember that groups like the ACLU and Planned Parenthood are pushing right back. Add Hollywood to that fight, Mr. Governor, and you've already lost to two things that truly make America great -- creativity and the women that do the actual creating in art and in life.

Lest there be any doubt what Sharpton meant when he said "... and in life", he added this --

So on Mother's Day, when thousands of mostly black and brown women are dying bringing life into the world, we are not letting politicians off the hook for punishing women for making decisions about their own bodies. 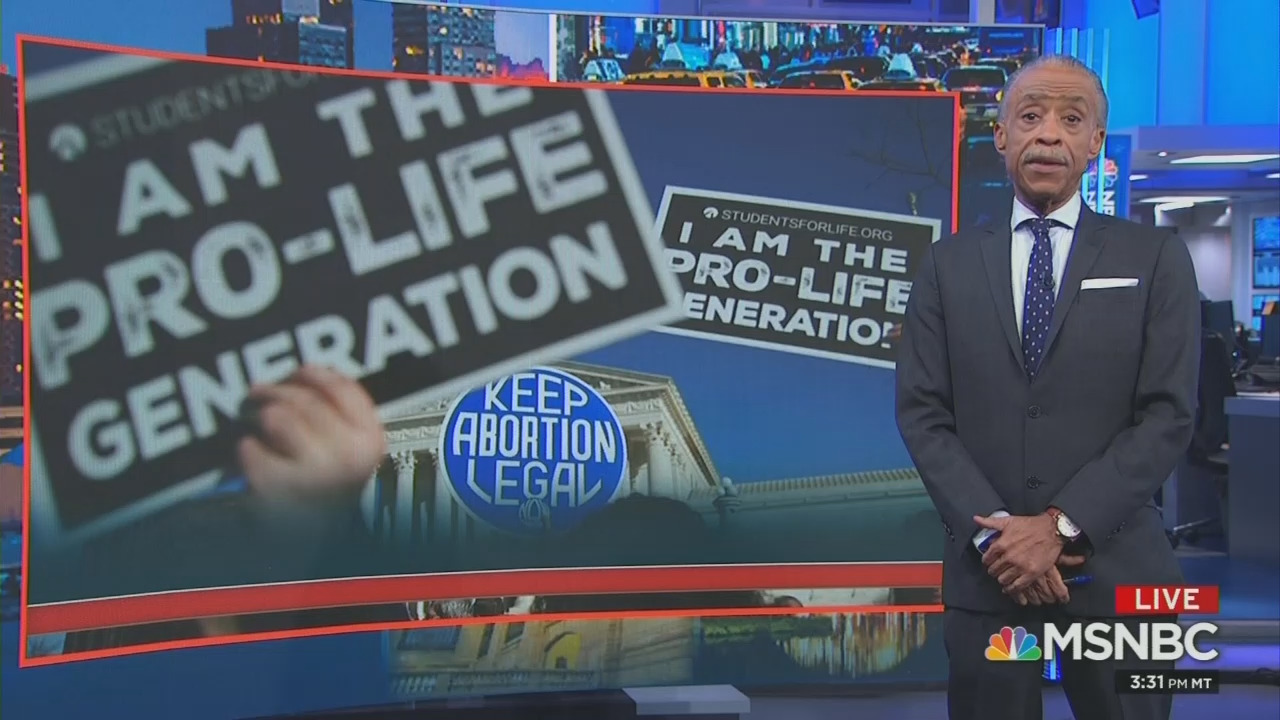 Sharpton here pushing the liberal narrative on pregnancy as akin to a perilous threat, a disease, hence justifying the abortion enthusiast's insistence for abortion on demand at any point in pregnancy. Otherwise, women die.

So when Sharpton previously touted those women for "the actual creating," those doing this "in art" are in Hollywood, and those achieving it "in life" are giving birth. But again, would it not be more accurate to describe those doing "the actual creating ... in life" as pregnant women who don't abort their unborn children? To put it another way, those who decide against destroying life.

And yes, Sharpton actually praises those women most ardent in their allegiance to legal abortion without limits as somehow morally superior to pro-life women who give birth instead -- and the good reverend did this on Mother's Day.

Sharpton ended his so-called Gotcha with even further absurdity --

Need it be more clear? Then go ask your mama. She might not say it, but she's thinking. I gotcha!

And while you're at it, you might want to thank her for creating and not destroying.

Yet another example of why MSNBC consigns Sharpton to the barren wastes of their weekend, so as to limit the damage.