NPR's DOJ Reporter: Date of Barr Letter on Mueller Probe 'Will Live in My Brain in Infamy'

The website for the NPR Politics podcast describes it as "where NPR political reporters talk to you like they talk to each other" -- while assuming that conservatives aren't listening. This can lead to unintentionally comedic content, at least for those conservatives who are listening and presumably cringing through the rest of it. 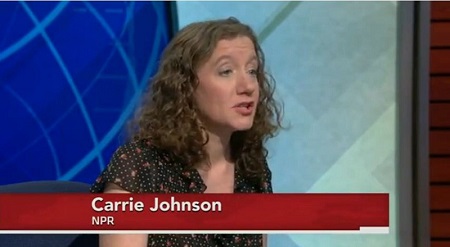 Such was the case for the podcast posted after Attorney General William Barr's memorable appearance before the Senate Judiciary Committee last week to explain his decisions on release of the Mueller Report.

DETROW: OK, so Carrie, let me make sure I have the timeline of this all right, 'cause there's a lot of letters involved and apparently more letters coming soon. OK, so we have William Barr sends his four-page letter to Congress that becomes public saying here's what Robert Mueller found. Robert Mueller doesn't like that. He writes his own private letter to William Barr. After he sends that letter and Barr presumably reads that letter, Barr goes to Congress and says, I don't know of any concerns, right?

JOHNSON: Yeah, that's exactly right. So, March 24th, a date that will live in my brain in infamy, a Sunday, remember, Barr sends this four-page letter to Congress.

Yeah except thousands of people were not killed on this particular day of "infamy" -- its death toll remains at zero -- unlike what Johnson sees as precedent, with her evoking the rhetoric used by President Franklin Roosevelt after Japan's surprise attack on Pearl Harbor.

Talk about revealing -- an NPR reporter actually compares the exoneration of a president from conspiring with a foreign nation to win an election -- legally, akin to acquittal on a charge of treason -- with one of the bloodiest and most consequential days in American history. Apparently Johnson views them as similarly devastating.

Just a hunch, but I'm guessing that election night in 2016 was a rough evening for her too, right up there with 9/11.

PS: Carrie Johnson had an entirely different approach at DOJ when Eric Holder was Attorney General. She sounded like a member of the PR team. When Holder traveled to Ferguson after the riots there, she reported:

The nation's top law enforcement officer traveled to Ferguson, Mo., on Wednesday to wrap his arms around a community in pain.