Yet again today, Rush Limbaugh demonstrated why he has remained the dominant figure on the radio airwaves for more than three decades -- few other observers dissect liberals and their endless pathologies with such precision and consistency.

Why is it, Limbaugh was asked during a recent outing with friends, that liberals appear intent on savaging Senator Marco Rubio, who emerged after the Parkland school massacre as the most high-profile Republican willing to compromise with Democrats on firearms.

But with liberals having convinced themselves that this is their moment, the last thing they want is compromise, Limbaugh pointed out --

Some people said, you know Rush, could you explain something to me?

Why do these Parkland kids and the Democrats, why are they dumping all over Marco Rubio? Marco Rubio is the only guy in the Republican Party trying to compromise with them. Marco Rubio is the only guy that's actually acknowledging that he has some degree of agreement with them. And they're just as mean as ever, and they are as unresponsive and unsupportive. They're rejecting Rubio and they're doing it personally, mean spirited. Why?

And I said, you know, that is a very shrewd question, the fact that you even ask that question means that you are highly, highly attuned and aware. Have any of you wondered why that is? If you're not aware, Rubio appeared on the CNN town hall immediately after the, well, relatively immediately after the shooting at the high school, he was the one Republican that did, and they just hooted and hollered and one of those kids stood up and said, I can't even look at you! You remind me of staring down the barrel of an AR-15! And Rubio is perhaps the most high-profile Republican to try and meet these kids somewhere near halfway.

He has let it be known that he agrees with them on certain aspects of gun control, the NRA, this kind of -- and they are savage! And not just the kids! Their organizers, their sponsors, their patrons, their Svengalis, their funders are all helping and inspiring these kids to just trash Rubio, and of course it doesn't make any sense to people -- the one guy trying to strike a compr(omise) -- folks, it makes so much sense in the world. It, it tells us so much. I was so thankful I got the question, because it's all part of the left stepping in it now and no longer trying to mask who they are and what their objectives really are. They do want to get rid of all guns. They do want to confiscate every gun they can get their hands on. They do want to repeal the Second Amendment. And a lot of people in our country don't believe they really want that, they want common sense this -- but now this, this is going to wake up a lot of people who have refused to listen to me and others properly define and explain these progressives.

After a break, Limbaugh sought to answer that query:

OK, the answer to the Rubio question, it's really quite simple and you know what, I hadn't even thought of this until I got the question which is why I was so appreciative of the question, it's a good question. ... It's not that I hadn't thought of it -- it had registered that this doesn't make any sense, Rubio's trying to reach out to these people. And even after the CNN town hall where he got savaged, he continued to try to reach out to them. And they got meaner, got more mean-spirited, more extreme, more hate-filled toward Rubio. You know, the inner workings, the deep dark crevices of my fertile mind, it didn't make any sense but I didn't take it any further until I got the question.

Here's the answer -- the answer is, they don't want any compromise. The answer is -- and forget the Parkland kids, you know, folks -- they either do or don't know what they're doing, but they think they do. It's like my dad used to say to me every Friday night -- you know, you boys, you think you're having fun but you're really not.

Do you know what the number of kids, there's been an actual survey of the March (For Our Lives) on Saturday in Washington -- 10 percent were kids. Most of them were women. Most of them were from the same women's march that was upset that Hillary didn't win in the immediate aftermath of the election. Ten percent of the crowd was kids. We're being lied to and misled daily about the whole thing. 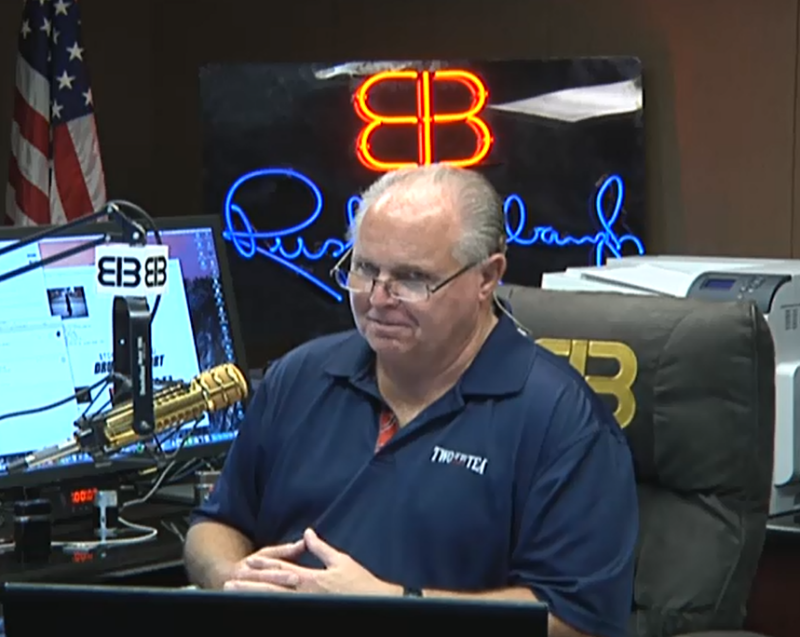 And this was reported by that unapologetic right-wing rag, The Washington Post.

And Rubio as the one trying to reach out and compromise has got to have his head cut off. They have to make sure that they send the signal -- compromise? Screw you! We're not interested in that! We're going full hog! We're going anti-Second Amendment. We're going to get rid of every gun, that's our objective! Ten years, 20 years, however long. That's what we want and nothing else and nothing less.

Which is why former Supreme Court Justice John Paul Stevens calling for repeal of the Second Amendment in a New York Times op-ed was actually, according to Limbaugh, "a godsend for us." "Because there is no way that anywhere near a majority in this country want to get rid of the Second Amendment. And there isn't going to be."

Also picking up on the left's unhinged animus toward Rubio was conservative New York Times columnist Ross Douthat in a column that ran today headlined, "Marco Rubio Must Be Destroyed". Douthat wrote:

There was a time, not so many years ago, when Rubio was attacked and his efforts at bipartisanship regarded skeptically because liberals perceived him as a threat -- a plausible and eloquent leader for a less bunkered G.O.P., a bridge between the party's old white base and a more multicultural America. (emphasis added and again). That time has passed, at least for now: After Rubio was defeated and partially undone by Trump, and especially after he turned in his #NeverTrump card and filmed a hostage-video endorsement, the official media consensus on the Florida senator flipped from "Great Republican Hope" to "Liddle Marco," and anti-Rubio sentiment became dominated less by anxiety than by contempt. ...

The deeper logic here is that the only plausible plausible mission for Democrats after the Trumpian takeover of the G.O.P. is a kid of Carthaginian peace: Delenda est the Grand Old Party.  In a different world maybe you could make deals with a Republican like Rubio; in this world with this G.O.P., you can work with him only if you're clearly the one forcing him to the table, and ultimately that's just a means to the real goal of his eventual defeat.

This explains why few other Republicans have followed Rubio's lead -- they see no point in helping their opponents unseat them, en route to repealing the Second Amendment. Former justice Stevens deserves credit -- he's a rare liberal willing to admit that's what he actually wants while not also claiming he doesn't.