What a shock it truly wasn't that one of the most warped recent examples of Trump Derangement Syndrome would be heard on a cable show hosted by Al Sharpton.

What Hodges said about the president was over the top even by the inelegant standards of MSNBC's weekend programming:

SHARPTON: Let me show you this tweet he just recently put up encouraging people to, he put it up a few minutes ago today, telling people don't go to the game. It says (quoting from the tweet), "If NFL fans refuse to go to games until players stop disrespecting our Flag & Country, you will see change take place fast. Fire or suspend!"

So is he trying to kind of front-end or interfere with those that are boycotting on behalf of (NFL quarterback/free agent Colin) Kaepernick?

HODGES: Well, first of all, Rev. Al, I want to thank God for giving us the opportunity to wake up this morning and speak on behalf of our people, you know, and honestly speaking when I look at where we are right now, it's beyond us getting justice in America. It's absolutely time for the Congressional Black Caucus to call for human rights violations that have occurred, past and previously, you know, and I think right now it's a civil rights issue within the context of what President Trump said the other night and as far as hampering athletes to be able to employ or get employment or gain employment.

And, you know, when I think about his whole thing is when was Amer-, make America great again. Now we see that 1817 is more likely when he's thinking about America being great as opposed to us kneeling on behalf of righteousness and justice, he wants us to be kneeling in the cotton fields again. 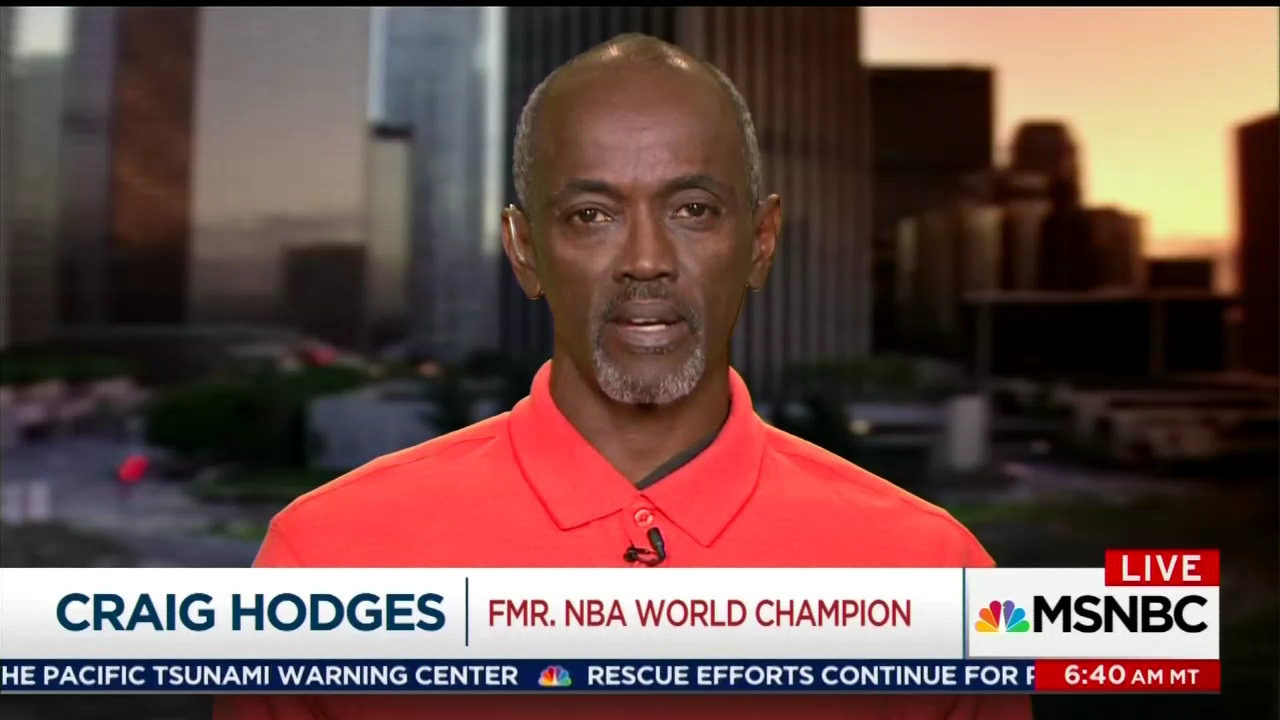 Lest anyone think he wasn't serious, Hodges then accused Trump of fomenting race war --

But it's a different day in that we who are mindful we have to stand up and battle this thing and it can't be us in a war of words, of back and forth. No, it's about making moves, like I'm talking about, go to the World Court, reach outside of the nation for help from Brazil, Russia and China, India, South Africa, the BRICS nations who've made, invest in black people, because right now it's a standard that he has set where he's trying to set up race, a basic race war, and it's ugly, man. And then to hear him just to go off on black women and women should be outraged all over the planet earth.

Oh it's ugly all right, but we've come to expect no less on MSNBC. What made Hodge's remarks even shabbier was his invocation of the Almighty just before accusing Trump of wanting to enslave tens of millions of people across America. His years in the NBA presumably enabled Hodges to make that prodigious leap from righteous to unhinged.