Leave it to MSNBC's Rachel Maddow to beclown herself right out of the gate last night in describing President Trump's firing of FBI Director James Comey.

In her eagerness to convey the alleged earth-shaking significance of Comey's dismissal, Maddow's initial commentary overlapped with live footage of Comey's jet about to leave Los Angeles. Compelling cable it was not.

This is really "unprecedented", Maddow stressed, right before she cited a precedent from the not so distant past involving a former president who's still very much among the living --

MADDOW: We've been seeing live images of a plane sitting on a tarmac now moving down a taxiway in Los Angeles. This is a private plane of some kind. It's not unusual for federal agencies, especially big ones like the Department of Justice and the FBI, to have private planes at their disposal. Director Comey was in Los Angeles for what I think was supposed to be a recruiting event today, an event that was canceled. There was some logistical question once he was fired today by the White House as to what would physically happen to him in the immediate aftermath of his firing.

Will he ever be seen again? Was Comey allowed one last phone call to his wife and kids? And what did he request for his final meal ...?

MADDOW: He was removed effective immediately, so right now he is no longer the director of the FBI. But we believe that Director Comey is on that plane which is now taxiing down the runway in Los Angeles, presumably that will be flying back to the East Coast, presumably FBI headquarters in Washington, he will be heading back to Washington.

But all of this is unscripted at this point. All of this is unprecedented. There are historical parallels to what happened today, but there is, there has never been anything like this before. There's been one instance previously in US history in which an FBI director has been fired by a US president. That was a very different circumstance. It was President Bill Clinton. At the time the FBI Director who was fired was William Sessions. There were, uh, in effect, uh, abuse of office concerns that had been documented against him by the Department of Justice.

Hmmm, kinda like the concerns documented against Comey in the memorandum written by Deputy Attorney General Rod Rosenstein that outlined the rationale for Comey's dismissal. Precedent, perhaps?

MADDOW: Things like using a Department of Justice aircraft to fly to see his family (Maddow gestures toward image of Comey's jet about to take off in Los Angeles). Things like using department resources to build a fence around his house that didn't seem to have any security purpose and maybe was just because he wanted a fence at his house. It was those kind of concerns that led to Sessions leaving, William Sessions being fired by President Clinton in the '90s. That's the only precedent we've got for an FBI director being fired.

So what Trump has done here isn't "unprecedented" at all, as Maddow earlier claimed. Maybe it needs an asterisk for those sticklers who insist on accuracy.

MADDOW: We're left as we watch these remarkable scenes ...

Of a plane taxiing down a runway. Granted, it is one cool-looking plane.

MADDOW: .... we wonder what's going to happen next here with James Comey. We're left to find other contexts, other analogies, to make this make sense. 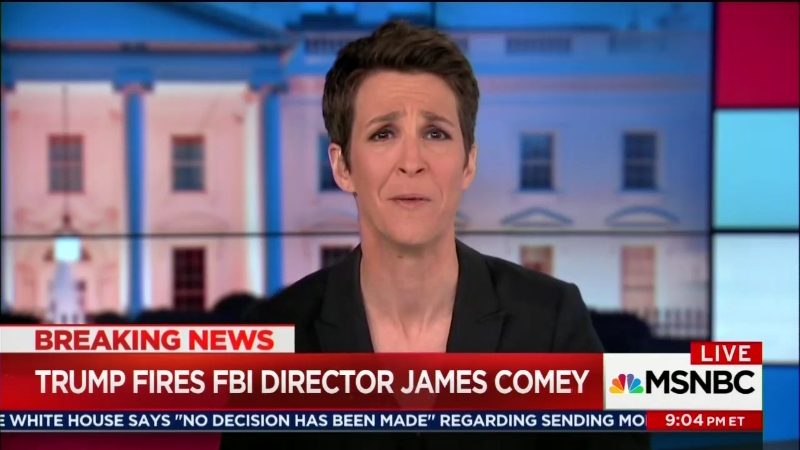 Which led -- as you just knew it would -- to Maddow invoking the so-called Saturday Night Massacre, President Richard Nixon's firing of his attorney general, and then his deputy attorney general, for their refusal to pull the plug on a special prosecutor investigating the Watergate scandal in a dispute over custody of Nixon's audio recordings. It fell to Solicitor General Robert Bork to sack special prosecutor Archibald Cox over Columbus Day weekend in 1973, though Bork's involvement was curiously omitted from Maddow's retelling lest her viewers think this had anything to do with vengeful Democrats derailing Bork's nomination to the Supreme Court in 1987.

Maddow also glosses over the fact that Bill Clinton inherited a recommendation from the first Bush administration to fire Sessions, as reported in the New York Times on Jan. 19, 1993, the day before Clinton took office. Instead, she conveys the impression that Clinton, paragon of virtue that he was, could not abide even low-bore corruption and booted Sessions soon after becoming president.

As for Sessions' firing being "the first in US history" by the president of an FBI director, Maddow neglects to mention that Sessions was only the fourth director of the bureau, which was established in 1908 as the Bureau of Investigation and renamed the Federal Bureau of Investigation in 1935. In other words, a considerable amount of US history had already occurred before the bureau and any of its directors came along. J. Edgar Hoover served as director in the two agencies for nearly fifty years, from 1924 until his death in 1972. After Hoover's passing, Congress passed a law limiting a director's term to 10 years.