Awww, that Daily Show reunion was going so well until breaking news had to intervene.

More accurately, it wasn't the breaking news that President Trump fired FBI Director James Comey was so deliciously awkward -- it was the wildly enthusiastic reaction to that news from Late Show host Stephen Colbert's audience.

While The Late Show airs at 11:35 p.m. Eastern, it is recorded late in the afternoon -- which coincided yesterday with the stunning news of Comey's dismissal. First came Colbert breaking the news of the breaking news to his audience --

COLBERT: Do you know that James Comey was fired by Trump, right?

STEWART (eyes widening, mock surprise): What?! (laughter from the audience)

COLBERT: I got a question for the audience. When I said (previously) that Comey was fired by Trump, you all cheered -- w-why? (more laughter) Is it because of what he did to Hillary? (cheers and applause from audience)

STEWART (pointing finger at audience): No!

COLBERT: ... which will now evaporate like cotton candy in the ocean.

STEWART (aware that Colbert is losing audience): No, you know what you got? You got, they were riding a wave. That was like a beginner's surfers class where they were like (mimicking a struggling surfer), I'm standing up! Oh no, wait! (audience laughs after being insulted) Oh no, now I'm on my knees! Hold on! Which it was -- I hate that guy, I love that guy, but Trump did, and they didn't know how to feel, and it was interesting to watch. 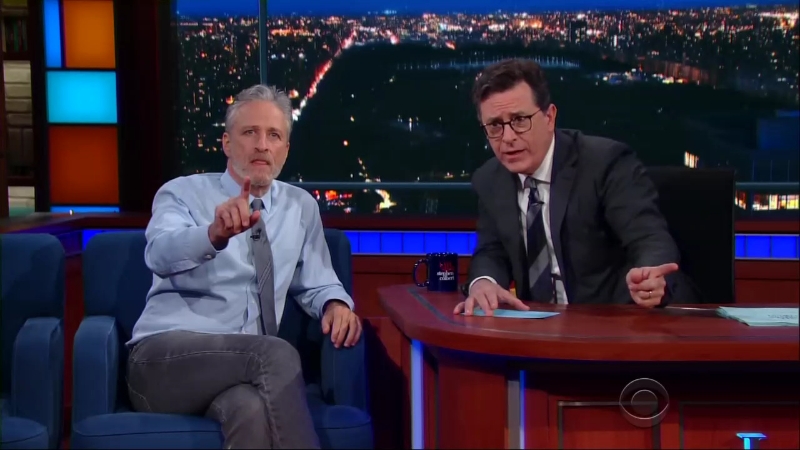 Turns out the timing was great -- because who better than leftist comedic Yoda Jon Stewart to explain away the Colbert audience's cheering of anything Trump has done, but most especially this. After all, as Stewart desperately explained, the unsophisticated rubes seated before them "didn't know how to feel" (Translation: they know not how to think) and Stewart -- resorting to slapstick -- gyrated his way toward pointing out their impropriety. For which they cheered, laughed and applauded -- thank you for reminding us we're morons! And for that brief shiny moment, The Late Show was hilarious, though not in the least as Colbert intended.