Chalk it up to the rigors of a book tour, if one is inclined to be charitable. Otherwise this comes across as delusional.

New York Times columnist Thomas Friedman, making the media rounds to flog his new book, "Thank You for Being Late: An Optimist's Guide to Thriving in an Age of Accelerations," made an assertion on NPR's On Point with Tom Ashbrook on Nov. 22 that surely set off guffaws coast to coast.

Before airing his dubious claim, Friedman suggested an alternative response to Donald Trump's angry tweets after the Hamilton cast's passive-aggressive diatribe to Vice President-elect Mike Pence after a production of the hit musical on Nov. 18 --

FRIEDMAN: What if Trump had said to the cast of Hamilton, you know ...

ASHBROOK: When they made their statement from the stage calling for American values of inclusivity and respect for every individual ...

FRIEDMAN (in guise of Trump): ... I really appreciate your concern. Your people obviously love the country ... 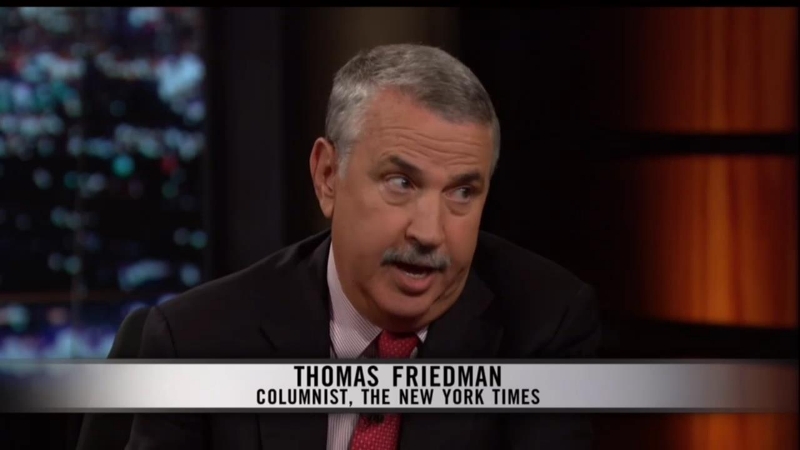 Your people -- Friedman's words, not Trump's.

FRIEDMAN: ... but let me assure you -- I've got it. You know, I've got it -- and thank you. End of stor-, not an end of story, we all would have said, wow, because Americans really want their president not to be a jerk, frankly, you know?  And he did just the opposite.

You know, there's one thing, Nick (Friedman referring to a caller) that I learned covering the Middle East for a lot of years and that is, there's only one good thing about extremists and that good is in inverted commas, is that they don't know when to stop, and in the end they do themselves in. I don't want Donald Trump to do that, I don't want him to go over the edge. But he will learn, you know, that when there's no breaks, when you have the House, the Senate, the Supreme Court, the media, you know, most of it, on your side, you go over, you go over a cliff. And if the president does that, he takes the whole country with him.

Most of the conservative media, maybe, but even this is open to dispute. Drudge, Limbaugh, Hannity, Ingraham and Breitbart are in his corner and were during the campaign; the Wall Street Journal, National Review and Weekly Standard were all critical of Trump through the campaign and receptive now to what he may accomplish due to his invaluable role in preventing a Clinton restoration. As for newspapers that endorsed Trump? Of the top 100 in circulation, only two backed him while 57 endorsed Hillary Clinton.

Friedman would be on firmer ground claiming that "more" of the media, not "most", are behind Trump ... than they were before his huge upset victory. (In the timeless words of secret agent Maxwell Smart, missed it by that much). And before the election, a liberal cable network such as MSNBC would often air extended live segments of Trump's speeches in pursuit of higher ratings, not support for the candidate.

Friedman's claim will come as laughable to those who toiled in the Trump campaign and witnessed the overwhelmingly hostile media coverage of their candidate in the 12 weeks following the major parties' conventions, as detailed in a Media Research Center report released in late October.

With so many media outlets acting in bad faith against him, Trump has ample reason to bypass biased intermediaries altogether and say what he wants to the American people directly through Twitter, Facebook and YouTube.