Left-wing court jester Bill Maher wasted little time last night condemning GOP nominee Donald Trump's crude, demeaning comments about women as caught on an open microphone back in 2005. But in the process, Maher demonstrated how he's probably not the person that liberals want leading the charge this time around.

A single example of Maher's hypocrisy on this would be one thing -- how about three? And that's from last night's show alone.

Right out of the gate Maher was comparing Trump's remarks to Access Hollywood correspondent Billy Bush to the disruption from Hurricane Matthew roiling the Florida coastline, and it quickly went downhill from there --

MAHER: To our friends in Florida on the southeast coast of America, we wish you the best. Looks like we dodged a bullet a little bit with that storm. However, with Donald Trump talking about women, it has been upgraded to a Category 5 s***storm. (laugher and applause from audience). I mean, every week I say this -- this is really happening. It came out today, they got a tape, did you see this? It's from 2005, I think, and it's Trump talking to Billy Bush, you know, 'cause he's such a serious guy, Billy Bush of Access Hollywood. They don't know their mic is on, that's one indication you're a f***ing idiot. And Trump says, you know, I'm automatically attracted to beautiful. I just start kissing them. I don't even wait! When you're a star, you can do anything. You can grab them by the p****! This is what he says, grab them by the p****?! Sounds like what Hillary did to him at the first debate. (Eruption of laughter and cheers from audience.) Is this really happening? The guy who's running for president says grab them by the p****!?

That really happened -- the guy who was president grabbing them by the p****?! That it did -- and his name was Bill Clinton. By bizarre coincidence, he's married to the Democrats' nominee for president, Trump's opponent. And it was Hillary Clinton who led the pushback to destroy the reputations of women who accused her husband of grabbing them wherever and whenever the impulse seized him. One of the women was named Monica Lewinsky and she now devotes her life to a crusade against bullying. And back in the '90s, it was the Clintons and their hacks who bullied her the worst.

Sounds to me that Maher is saying Clinton so prevailed over Trump in the first debate that he was rendered feminine, therefore weaker, and hence unworthy of higher officer. Clinton, on the other hand, was clearly not the p**** on stage, at least to Maher, and she must therefore have been the more masculine of the two candidates, and hence preferable. And it sure sounds like Maher is praising Clinton for dominating Trump in this manner -- even though when it was Trump saying this, Joe Biden alleged it was sexual assault. In other words, when it's Trump saying it, the condemnation is immediate and universal. When it's Maher saying Clinton went after Trump in the exact same way, the Maher mob goes wild.

Not long after that, Maher and his guests revisited Trump's remarks and more revealing comments were made --

MAHER: We found out today, he was talking to Billy Bush -- I moved on her and I failed. He's talking about a married woman. I'll admit it, I did try and f*** her, she was married. Mike Pence, your move. And I moved on her very heavily. In fact, I took her out furniture shopping.

MAHER: I know! I've heard of buying dinner to get into a woman's pants, but you have to buy the whole dining set?!

MAHER: Furniture to buy a wo-, that's crazy. 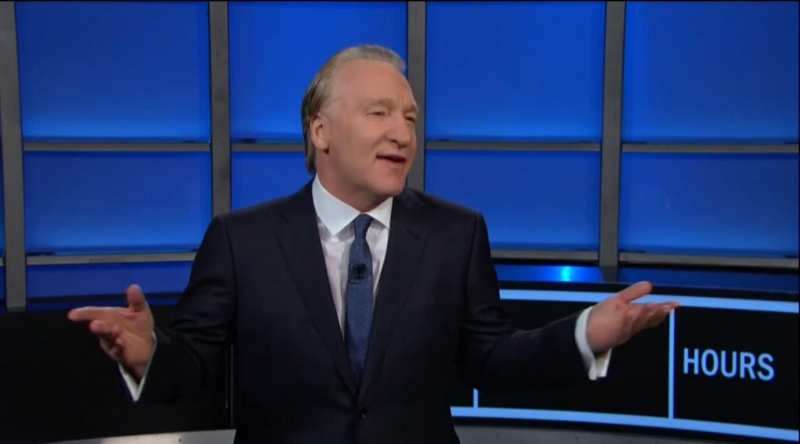 Maher stopping just short of saying "furniture to buy a woman," which really, really wouldn't go over well, considering the context. Which is, Maher and his all-male guests in hearty agreement that the surest path to bedding a woman is by providing her with things that possess value, an exchange also known as prostitution.

Seems only fitting that Maher ended the show with a slam at Trump's supporters, whom he derided as bigoted, frustrated failures before describing them the same way he's maligned Trump all year --

At the convention Trump said, I am your voice. For once he wasn't lying. He is your voice -- because you're a whiny little bitch.

What better way to end a show dominated by talk of misogyny than with another example of it from Maher.

This is hardly a recent phenomenon, as those familiar with Maher are aware. Back in 2012, ex-Clinton staffer turned political consultant and columnist Kirsten Powers wrote a withering post for The Daily Beast headlined "Rush Limbaugh isn't the only media misogynist." With devastating precision, Powers wrote about Maher after condemning such left-wing luminaries as Chris Matthews, Keith Olbermann, Ed Schultz and Matt Taibbi --

But the grand pooh-bah of media misogyny is without a doubt Bill Maher -- who also happens to be a favorite of liberals -- who has given $1 million to President Obama's super PAC. Maher has called Palin a "dumb twat" and dropped the C-word in describing the former Alaska governor. He called Palin and Congresswoman Bachmann "boobs" and "two bimbos." He said of the former vice-presidential candidate, "She is not a mean girl. She is a crazy girl with mean ideas." He recently made a joke about Rick Santorum's wife using a vibrator. Imagine now the same joke during the 2008 primary with Michelle Obama's name in it, and tell me that he would still have a job. Maher said of a woman who was harassed while breast-feeding-feeding at an Applebee's, "Don't show me your tits!" as though a woman feeding her child is trying to flash Maher. (Here's a way to solve his problem: don't stare at a stranger's breasts). Then his coup de grace: "And by the way, there is a place where breasts and food do go together. It's called Hooters!"

Liberals -- you know, the people who say they "fight for women" -- comprise Maher's audience, and a parade of high-profile liberals make up his guest list. Yet have any of them confronted him? Nope. That was left to Ann Coulter, who actually called Maher a misogynist to his face, an opportunity that feminist icon Gloria Steinem failed to take when she appeared on his show in 2011.

The main reason that Maher should look elsewhere for material after mining laughs from Trump's boorishness -- people will start to notice how much it sounds like his.