Ed Schultz is probably best known to NewsBusters readers from his five-year run at MSNBC until given the boot last summer. He also hosted one of the top-ranked liberal radio shows -- agreed, it's a short list -- for a decade before putting it behind him two years ago, though he's continued to post News and Commentary videos on YouTube when not spouting the Kremlin line at the Putin-backed propaganda organ RT, also known as Russia Today.

Schultz was also outspoken in his support for Bernie Sanders during the primaries, which may help explain his surprising criticism of Warren in a YouTube video posted Monday --

SCHULTZ: All right, the politics of the day, there is an absolute smear campaign that has broken out between Donald Trump and Elizabeth Warren and I really don't know who started it. But it's almost beneath Senator Warren. Democrats and liberals in this country, they know who Donald Trump is and they're never going to vote for him. But for some reason, I don't know if Elizabeth Warren is trying to outdo everybody else so she can be a presidential candidate ...

SCHULTZ: ... but it was on full display today in Cincinnati, Ohio. It almost was like an audition. It was almost as if she was begging Hillary Clinton for the ask and in the process just continued to insult Donald Trump. I don't know if this is going to play or not. I mean, I think most people have already made up their mind what they think of the two candidates and where this is all going. I think on the liberal side are just looking to see how much of an influence Bernie Sanders is going to have on the platform.

Now, as far as the liberal left is concerned and the progressive movement, so to speak, it's pretty clear to me that the Clinton campaign is trying to prop up Elizabeth Warren to replace Bernie Sanders because I think they're upset with Sanders, that this has gone on this long, that there's actually the potential of a platform fight at the convention depending on what happens with the Trans-Pacific Partnership. And so Elizabeth Warren has just, I don't know where all this enthusiasm was when Clinton and Sanders were going at it. I guess she was just home watching all the news, deciding on how she was going to play this thing.

But her performance today in front of that crowd in Cincinnati, Ohio, was unlike any other surrogate we've seen. I mean, how could she be wrapped up in the closet so much and yet feel so strongly about Hillary Clinton. You almost have to question her motives. I like Elizabeth Warren's politics but I'm not quite sure I'm sold on her.

Variation of an old saw -- it's not liberalism I can't stand, it's liberals. Schultz then played snippets of Warren's rant against Trump --

WARREN: Donald Trump says he'll make America great again. It's right there -- no! -- it's stamped on the front of his goofy hat. You want to see goofy?! Look at him in that hat. But when Donald Trump says great, I ask, great for who exactly? Yeah! (reacting to applause from audience). For millions of kids struggling to pay for an education?

It takes a special kind of shameless for Warren to ooze concern about that -- after getting paid a hefty $430,000 from Harvard to teach a single course in its law school. But hey, it's all about the kids.

WARREN: For millions of seniors barely surviving on Social Security? For families that don't fly to Scotland to play golf? 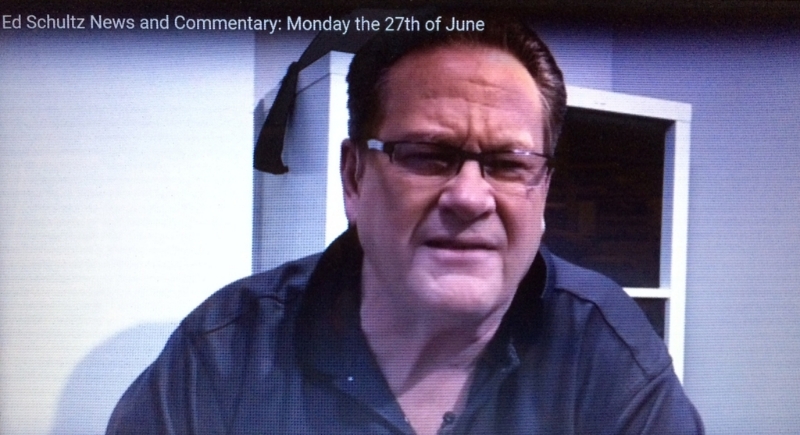 Apparently it was Warren's allusion to Trump's visit to one of his golf resorts in Scotland that got under the skin of Schultz, who often flies his Cessna 206 to a fishing lodge he owns in Canada --

SCHULTZ: Now, I'm just going to say this -- that is actually going to help Republicans motivate behind Donald Trump. It sounds like Elizabeth Warren is anti-profit. It sounds like she is anti-success, that everybody has to be the same and anybody who has had any success at all is going to get vilified or get thrown in the Trump camp. And I think that that's gonna piss off a lot of Republicans to the point where they say, you know what, Trump is a helluva lot better than listening to that socialist-type stuff and that's, that's what I think people are going to say.

Am I supporting Trump? No. Am I going to vote for Trump? No way. But I understand why people are, you know, in his camp, although he's imploding quite a bit. I'm just not sold on Warren ... I think she's over the top and I'll play the insults that she threw out today. I just think it's beneath her.

"It sounds like Elizabeth Warren is anti-profit" -- gee, ya think? On the bright side, it's wonderful to see Schultz awaken from his extended coma that began roughly the same time Warren became a public figure.