It ranks high among the assorted amusements provided by MSNBC -- Rachel Maddow's invariably skewed recollection of campaigns past.

On her cable show Tuesday, Maddow served up her signature brand of revisionism on the ways in which the Vietnam War was an issue for presidential candidates in 1992, 2000, 2004 and 2008. Those who were awake and paying attention during the campaigns may find their recollections not aligning with hers.

Prior to 1992, many candidates had served in the military during World War II and would cite their duty as qualifying them for commander in chief. But with the first major party nomination of a baby boomer in 1992, attention shifted to what candidates had done during the Vietnam War, Maddow said --

Operative word here -- "legitimate" -- though future Clinton operative/apologist Sidney Blumenthal went out of his way to render the elder Bush's military service illegitimate with an October 1992 New Republic hit piece. Back to Maddow --

After that election in which he was elected president in 1988, our presidential elections after that couldn't just be about our candidate's heroism in World War II and that war that the country felt so good about and felt so good about winning. After 1988 and Poppy Bush getting elected, thereafter some of the candidates started to be young enough that what we were talking about at election time was not World War II, but rather where they were during Vietnam, this war about which we have much more complicated feelings as a country. So it was Bill Clinton and his student deferments in 1992.

In 2000 it was George W. Bush and his plum assignment to be guaranteed stateside in the Air National Guard. The George W. Bush campaign turned that around in 2004 when the Democrats chose a legitimate Vietnam war hero, John Kerry, to put up against Dubya when Dubya was running for re-election in 2004, the Republicans that year denigrated John Kerry's service in Vietnam, they said he faked all those medals that he earned.

By 2008 the Republicans were running their own legitimate Vietnam war hero for the presidency. John McCain's extraordinary service and bravery and almost unimaginable personal sacrifice in Vietnam. I mean, by rights, based on his biography alone, that should have made the 2008 election all about the Vietnam War as well.

But by 2008 something else was going on when it comes to war. By 2008 the country was obsessed with a different war, another war, an ongoing war that was basically the spindle around which the campaign of 2008 spun like a broken record -- in the primaries, in the general, all the way through it was about the war in Iraq.

"All the way through it was about the war in Iraq" -- which was true about the campaign in 2004, but not the one that followed in 2008. Iraq as a major issue in the 2008 campaign was limited to a specific and limited period -- the Democratic primaries -- because first-term senator Barack Obama's only significant distinction over his major Democrat opponents was that they voted in favor of going to war with Iraq while he had opposed it.

By the time Obama secured the Democrat nomination in June 2008, the surge in Iraq that he and other Democrats repeatedly maligned had succeeded to the point that Iraq was no longer a major issue in the campaign. By early September Obama was awkwardly forced to admit to Bill O'Reilly that the surge had succeeded. And once the economy collapsed in mid-September, no other issue mattered for the remainder of the campaign. 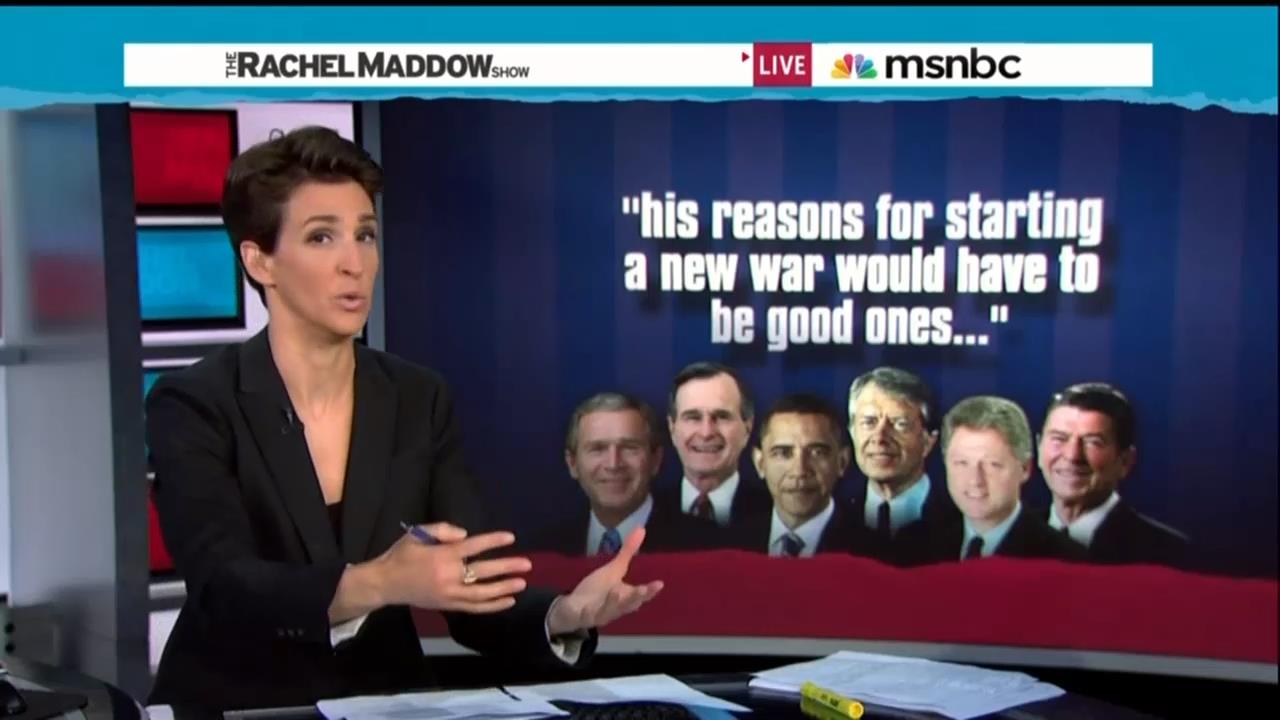 Maddow also claims that Republicans in the 2004 campaign "denigrated" the military service of John Kerry while she likens him to the elder Bush as a "legitimate war hero." Setting aside the dubious suggestion that their stints in the military are even remotely comparable, Maddow ignores the fact that it was men who had served with Kerry in Vietnam, the Swift Boat Veterans for Truth, who made skepticism about Kerry's wartime experiences a valid issue.

Among the abundant examples they highlighted -- Kerry receiving three Purple Hearts for minor wounds, none requiring lost duty time, in a four-month tour of duty cut short from the standard 12 months by Kerry's request to return home. And it was Kerry himself who made his military service the centerpiece of his campaign, culminating in the opening words of his acceptance speech at the Democrat convention while he saluted the adoring throng -- "I'm John Kerry and I'm reporting for duty." For a self-proclaimed warrior seemingly eager to fight, Kerry soon proved vulnerable to flak.

But where Maddow wholly jumps the tracks is in her claim that it was Bill Clinton's "student deferments" that opponents seized upon as a major issue in the 1992 campaign. True, Clinton was able to avoid the draft while he was enrolled at Georgetown, Oxford and Yale. But Clinton's student deferments were not an issue that nearly derailed his first presidential campaign -- it was his evasion of the draft. And it is beyond dispute that Clinton did this because he admitted so in a Dec. 1969 letter from Oxford to Col. Eugene Holmes, director of the Reserve Officers Training Corps program at the University of Arkansas.

Two paragraphs into the letter, which became public in February 1992, Clinton wrote this damning admission -- "First, I want to thank you, not just for saving me from the draft (emphasis added), but for being so kind and decent to me last summer ..."

Clinton also wrote that he opposed and "despised" the Vietnam War "with a depth of feeling I had reserved solely for racism in America" before the war. "I have written and spoken and marched against the war," Clinton wrote. "One of the national organizers of the Vietnam Moratorium is a close friend of mine. After I left Arkansas last summer, I went to Washington to work in the national headquarters of the Moratorium, then to England to organize Americans here for demonstrations Oct. 15 and Nov. 16."

Next came this damaging revelation -- "From my work I came to believe that the draft system itself is illegitimate" -- all the more reason to evade it. Clinton wrote that he finally resigned himself to the possibility of being drafted, despite his strenuous efforts to avoid it, "for one reason: to maintain my political viability within the system." After a lottery system for conscription was introduced based on birthdates, and Clinton drew a relatively low number,  he succeeded in running out the clock on serving in a war that began winding down after a Republican, Richard Nixon, took office.