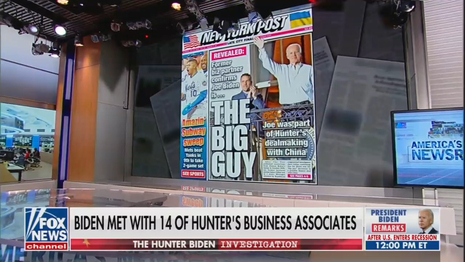 Two big developments in the ongoing Hunter Biden scandal dropped last night and this morning but the Big Three (ABC, CBS, NBC) networks (so far) have refused to report on them.

There is further confirmation that President Joe Biden is in fact the “big guy” that Hunter’s former business partner Tony Bobulinski first cryptically referred to in his exchanges with the President’s son.

Also there’s new evidence that President Biden met with at least 14 of Hunter Biden’s business associates when he was Vice President - something Joe Biden vehemently denied.

None of the network morning shows (ABC’s Good Morning America, CBS Mornings, NBC’s Today) reported on any of the two new developments.

First up, the New York Post’s Miranda Devine on July 27 reported the following:

One of Hunter Biden’s former business partners referred to Joe Biden as “the Big Guy” in a panicked message the same day The Post broke news of the infamous laptop from hell left behind by the president’s son, The Post has learned.

James Gilliar, a former British special forces officer with ties to UK intelligence services, discussed The Post’s exclusive report with an unnamed person on Oct. 14, 2020, according to the message provided by a whistleblower to GOP congressional investigators probing the laptop.

In the message, Gilliar, 58, reassured the person that the revelations about Biden’s apparent involvement in his son’s foreign deals would not be damaging — regardless of the outcome of the 2020 presidential election. Gilliar was asked if “Hunter and/or Joe or Joe’s campaign [would] try to make it ‘Oh, we were never involved’ … and try to basically make us collateral damage?”

“I don’t see how that would work for them…,” Gilliar responded in the 6:07 p.m. message reviewed by The Post. “I think in the scenario that he wins they would just leave sleeping dogs lie,” Gilliar added. “If they lose, honestly, I don’t think that the Big Guy really cares about that because he’ll be too busy focusing on all the other s–t he is doing.”

The identity of the “big guy” has since formed part of the grand jury investigation in Wilmington, Del., into Hunter’s business dealings — as calls ramped up to have President Biden, who has repeatedly denied any involvement in his son’s dealings, included in a conspiracy probe.

Gilliar had referenced the “big guy” as he acted as the driving force behind Hunter and his uncle Jim Biden’s planned multimillion-dollar deal with Chinese energy conglomerate CEFC.

In an email to Hunter, Jim and other partners on May 13, 2017, Gilliar outlined an equity breakdown in which 10% of the lucrative CEFC joint venture would be held by Hunter “for the big guy.”

That email, which was previously revealed by The Post, was found on the laptop Hunter abandoned at a Delaware repair shop in April 2019.

Another former associate of the first son, US Navy veteran Tony Bobulinski, publicly declared in October 2020 that “big guy” was a reference to President Biden — and alleged that Biden was aware of, and involved in, the planned CEFC deal.

President Biden met with at least 14 of Hunter Biden’s business associates while he was vice president in the Obama White House, casting further doubt on the president’s repeated claims that he had no knowledge of his son’s foreign business dealings.

“I have never spoken to my son about his overseas business dealings,” Biden said in 2019.

But the president met with at least 14 of Hunter’s business associates from the U.S., Mexico, Ukraine, China and Kazakhstan over the course of his vice presidency, a Fox News Digital review found.

The report goes on to detail the various meetings, something that the nets have yet to report on. That and the confirmation of Joe as the “big guy” are just the latest in a series of recent bombshells the nets have refused to report on.