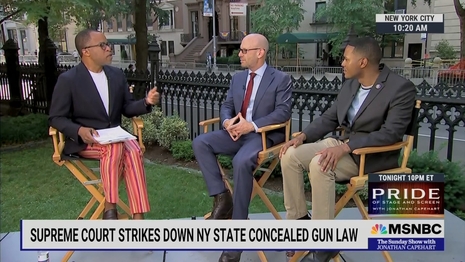 As Americans get ready to celebrate their freedoms on Independence Day we at NewsBusters wanted to remind our readers how liberal journalists and celebrities devoted an entire month to attacking their Second Amendment rights.

They spent all of June blaming law-abiding gun owners for the actions of crazed gunmen as they pushed for new gun control laws. They also had a fit over the Supreme Court’s decision to let private citizens protect themselves with a gun.

The following are the most outrageous attacks on the Second Amendment from the liberal elites in newsrooms and Hollywood from the last month:

Panic Over Supreme Court’s Concealed Carry Decision, “Out of Step” with Americans

“There’s a phrase in the Supreme Court’s decision that just made my blood run cold. And that was, someone should be able to carry a concealed weapon for, quote, ordinary self-defense.”
— Host Jonathan Capehart on MSNBC’s The Sunday Show with Jonathan Capehart, June 26.

“We just got a statement, David, from March for Our Lives. And the very first sentence of it says this, ‘young people will die as a result of the Court’s decision.’ Do you believe that?”
— Host Chris Jansing to gun control activist David Hogg during live coverage of the Supreme Court decision on concealed carry, as aired on MSNBC Reports, June 23.

“Now of course we have the Supreme Court weighing in on the biggest Second Amendment case in more than a decade. It really does show that of course the Supreme Court is taking a stand on this issue but also that Americans might be now even more out of step with the Justices’ decision in this case.”
— Correspondent Yamiche Alcindor during NBC News live coverage of Supreme Court decision on concealed carry, June 23.

“The question is will this make it much more easy for people to have weapons in public, concealed weapons and will that lead to more shootings and more accidents and different kinds of things?”
— Correspondent Pierre Thomas during ABC News live coverage of Supreme Court decision on concealed carry, June 23.

“The Supreme Court has decided that the Founders, who believed some people should live in slavery, also believed we should all live in terror.”
— June 23 tweet by MSNBC’s The Last Word host Lawrence O’Donnell.

“We’re not allowed to feel physically safe anywhere in America thanks to Republicans’ ironclad partnership with the blood-soaked NRA which long ago quit the gun safety business and has been working for decades to make sure that the most lethal arms get into as many alienated 18 and 19-year-old incel hands as possible so that we can’t feel safe at Walmart, at the supermarket, at bible study or church service, at the salon, at the hospital, if God forbid some guy gets mad at his doctor for not giving him opioids, at a nightclub, at a concert, even at a funeral. Or at school. Whether you’re in high school or you’re ten and in the fourth grade, in America, and only in America you are literally rolling the dice every time you leave your house or drop off your kids at school, and you just have to pray that today is not your day or their day to meet that angry alienated American man with an AR-15.”
— Host Joy Reid on MSNBC’s The ReidOut, June 6.

“We need the American people to see what these children’s bodies look like when they’ve been hit, when they’ve been hit by these bullets, and make them face the ugliness of it. It’ll be a shocking moment, but the only kind of thing that might shock the system enough to get action.”
— Substitute host John Heilemann on MSNBC’s Deadline: White House, June 2.

Former Clinton White House counselor Paul Begala: “Americans are going to have to decide. You know, GOP stands for Guns Over People and if people don’t lift up the ballot box, we’re just going to keep carrying coffins.”...
Host Don Lemon: “What you just said, ‘The GOP stands for guns over people,’ right? I can hear that coming up in the election….Is that a campaign ad for Democrats?”
Begala: “I hope so.”
— CNN’s Don Lemon Tonight, June 2.

“The Republicans want to make sure an 18-year-old continues to buy automatic weapons and weapons of war, that Republicans want to continue to destroy our democracy….We cannot let the crazies take over. You have to make the fear of crazy MAGA maniacs more than the fear of an extra 50 cents on a loaf of bread.”
— MSNBC contributor/former advertising executive, Donny Deutsch on MSNBC’s Morning Joe, June 3.

“It’s just one lie after another lie after another lie. Like lemmings going off the cliff while our children are being slaughtered in classrooms, while parishioners are being slaughtered in churches and synagogues, they just, like idiots, [Republicans] repeat the words given to them by the NRA.”
— Host Joe Scarborough on MSNBC’s Morning Joe, June 9.

Substitute-host Jonathan Lemire: “There was another moment later in the hearing when Republican Congressman Greg Steube who was appearing virtually from his home in Florida showed off guns and magazine clips he claimed would be banned….Donny Deutsch, I turn the floor to you here. Your reaction to….that spectacle we saw from that Republican Congressman?”
MSNBC contributor/former advertising executive, Donny Deutsch: “What’s wrong with these people?”
MSNBC contributor Mike Barnicle: “They’re mentally ill.”
— MSNBC’s Morning Joe, June 3.

“As a senior administration official told me this morning, I think the president kept the heat on Republicans. But they know that they are now facing an extremist Republican Party on this issue….This is not about finding a middle ground compromise because Republicans aren’t anywhere close to the middle ground. The question is whether they will give an inch or two or three on red flag laws….This is a very, very tough issue for them, given the rock solid Republican opposition.”
— White House correspondent John Harwood on CNN Newsroom, June 3.

As If She Wasn’t Biased Against Gun Rights Before

“If I want to talk to someone….for half an hour, even 45 minutes, an hour about gun violence and why nothing has been done to reduce gun violence in this country, I can do it. I’m 65 years old, I’m the boss of me, I run my own show and I can speak out about the need for sensible gun laws, and I can be an activist, and everyone should be an activist before…. they have a fourth grader killed in his or her class or before they have a grandparent killed buying a quart of milk….So I feel incredibly liberated.”
— Former NBC Today show co-host and CBS Evening News anchor Katie Couric on Comedy Central’s The Daily Show with Trevor Noah, June 14.

Co-host Whoopi Goldberg: “Right before we went on air, the Supreme Court handed down their decision that will allow New Yorkers to carry concealed firearms, striking down a centuries old state law that made people have to prove they had due cause to conceal and carry. Now people are still processing all of this. The implications, we don’t know really what it actually means, but, you know, given everything New York City is going through, it seems — I don’t even have the words. It seems —  ”
Co-host Ana Navarro: “Stupid?”
Co-host Joy Behar: “It’s insane! It’s insane!”...
Co-host Sara Haines: “It’s like a death wish of sorts.”...
Goldberg: “It’s such a middle finger to New York.”
— ABC’s The View, June 23.

“I think we’re seeing such hypocrisy quite frankly from not only the Supreme Court, of course, but from Republicans. Because if you truly are pro-life, you cannot be pro-life and also be pro-death penalty and be pro-guns! There’s just no way that that is consistent.”
— Co-host Sunny Hostin on ABC’s The View, June 29.

Co-host Joy Behar: “What’s his face, [GOP Senate Minority Leader Mitch] McConnell? He’s demanding that the House pass security protections for Supreme Court justices, quote, unquote, ‘before the sun sets today.’”
Co-host Whoopi Goldberg: “Well, they have protections.”
Behar: “But nothing on Uvalde so far, and nothing on Buffalo, and it’s been at least a month and a half since Buffalo or something. And two weeks since these kids got killed. He’s worried about, you know, the Supreme Court. That is his urgency!”
— Discussion on June 9 edition of ABC’s The View one day after an assassination attempt on Supreme Court Justice Brett Kavanaugh’s life.

Host James Corden: “Could you agree, drag has become incredibly mainstream, celebrated in every corner of the world which makes to me and so many people what’s happening in Texas all the more shocking. For anyone who doesn’t know, they’re introducing laws to ban children from attending drag shows, and I’m very interested to get your take.”...
Rupaul: “This is a diversion tactic to….take the narrative away from the gun debate into something to scare people into thinking about something else….They’ve been successful. They have changed the narrative away from the gun debate into this drag queen thing. Say, y’all want to help your kids? Take away them guns. That will help them kids….Drag queens ain’t hurting nobody.”
— CBS The Late Late Show with James Corden, June 17.

Samantha Bee to Gun Owners: “Read the Room, Freaks!,” No Right to Your “Hobby”

“If you thought the unspeakable horror of last week might have convinced the NRA to cancel its annual circle jerk of a gun convention in [beep] Texas no less, you’d be wrong….Oh my God, read the room, freaks. To be fair there were some changes to the NRA’s lemon party. The Grand Old Night of Freedom Party was canceled after artists like Don McLean and Lee Greenwood took their one and only songs and pulled out. Unfortunately, when it comes to people whose parents we wished had pulled out, no such luck….If you’re surprised the NRA is still kicking around you’re not alone. It’s been in legal and financial jeopardy for years. But it turns out its ‘gun rights above all rights’ message has been so ingrained in the Republican Party, the GOP will still hold a gun gala just days after a school shooting.”
— Host Samantha Bee on TBS’s Full Frontal with Samantha Bee, June 2.

“For years we’ve known we have a gun violence epidemic in this country, but the past few weeks have been almost unbearable, and while you might think all of this would finally bring everyone together to do something, you’d be wrong and honestly, kind of dumb. Come on, this is America!...Human lives are not an acceptable cost for a hobby, unless your hobby is ritually sacrificing human lives, in which case, okay, I can at least follow the logic. I mean, that’s the whole point. Sadly, it’s not looking like things will get better soon.”
— Host Samantha Bee on TBS’s Full Frontal with Samantha Bee, June 9.

“In a country reeling from gun violence, the GOP extremists on the Supreme Court now overrule the rights of local governments to try and protect citizens. Truly a disgraceful ruling while the Justices themselves want protections against people with guns.”
— June 23 tweet by Barbra Streisand.

“The latest Supreme Court decision on firearms neglects to say the one thing that they actually meant to say; for whites only.”
— June 23 tweet by actor Ron Perlman.