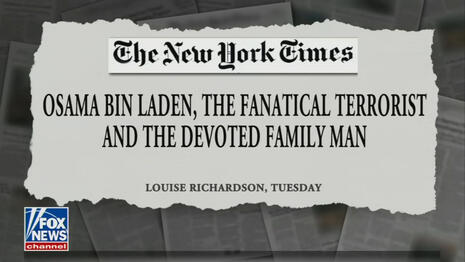 The former Navy Seal who killed bin Laden, Robert J. O’Neil, called out the Times before somebody on their social media team quickly changed the headline. The original August 3 tweet headline read: “Osama bin Laden, the Fanatical Terrorist and the Devoted Family Man.”

O’Neil responded: “Family man. He used his wife as a human shield. Lucky for me he was taller than her.”

Family man. He used his wife as a human shield. Lucky for me he was taller than her. https://t.co/J1vAnl6bcT

While reviewing Peter Bergen’s book “The Rise and Fall of Usama bin Laden,” writer Louise Richardson highlighted bin Laden's family life and how he was one of a whopping 55 children and how he himself ended up having 24 children of his own.

“When it came to his family, bin Laden was a man of contradictions,” Richardson summarized. “On the one hand, he required his daughters from the age of 3 to be separated from males and insisted that females leave the room when men appeared, even on satellite television. Yet two of his older wives were highly educated, with doctorates in Koranic grammar and child psychology. They helped write his public statements and curate his public image; they engaged in discussions with him on strategy.”

The review touched on the family drama among the bin Ladens, but also noted the terror leader's parenting style, writing, “In the years before he was driven into hiding, he went to pains to ensure his sons were tough, taking them on arduous hikes in blistering heat and limiting their food and water. He refused to allow the use of any refrigeration or air-conditioning.”

However, the review’s title, which originally read “Osama bin Laden, the Fanatical Terrorist and the Devoted Family Man,” raised eyebrows on social media, including O’Neill.