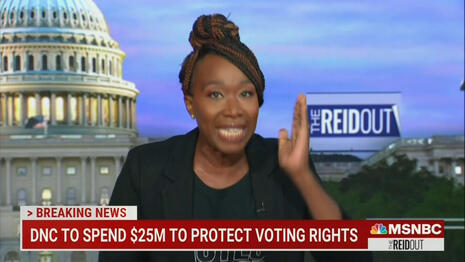 All this month, lib journos have lobbied their Democratic friends to advance a voting rights bill that would essentially federalize elections and grab power from the states. Their main talking point? States run by Republicans are pushing for oppressive “voting restrictions” that are akin to an “American apartheid.”

The following is just a few examples of liberal journalists and Hollyweird types like Joy Behar and Cher openly pushing for passage of the Democrat’s H.R.1 bill and their smear campaign against Republicans:

Upset at Dems for Not Fighting GOP’s “Apartheid”

“They’re [Democrats] going to mess around and find out that if they won’t fight for their base, their base will replace them with people who will fight. The other difference between now and the 1960s is everybody in Congress were old white guys who even if they were far-right or far-left or in the middle, could all sit down and have a beer together because they were basically socially all on the same side and could all live with whatever the results were. This is now a fight to the finish. It’s democracy or autocracy. It’s America or 1980s South Africa. That’s how serious it is, Democrats. Wake up.”
— Host Joy Reid on MSNBC’s The ReidOut, July 8.

“Civil rights leaders are urging President Biden to do more to protect voting rights, calling GOP efforts to curb ballot access, quote, ‘an effort to impose a system of American apartheid.’ Seventeen states have already enacted 28 new laws making it simply harder to vote, harder for you to vote....You gotta — I don’t know if ‘play dirty’ is the right word — but you gotta, you know, address, for instance, the filibuster if you truly believe that the VRA [Voting Rights Act] still has a path.”
— Anchor Jim Sciutto’s introduction and final question to Democratic Party chairman Jaime Harrison on CNN Newsroom, July 9.

“Where is the Voting Rights Act? They’ve [Democrats] had majority in the House since ’18. Why is this piece of legislation not already written, not already passed? Where is it? They spend so much time on this press release of H.R.1. Where are they on the Voting Rights Act? That is what could give them the teeth to fight these laws. And they’re way behind on this.”
— NBC’s Meet the Press host Chuck Todd on NBC’s Sunday Today, July 11.

“When we look back at the tenure of [Chief Justice] John Roberts, I think one of the signature accomplishments and — you know — we’ll see whether many people view it as an accomplishment, but one of the signature results of the Roberts Court was the destruction of the most important civil rights law in American history, the Voting Rights Act of 1965.”
— CNN chief legal analyst Jeffrey Toobin on CNN Newsroom, July 1.

“All six conservative Republican-appointed justices uniting to uphold voting restrictions in Arizona that would disproportionately affect voters of color. And that’s because making it harder for people to vote, particularly people of color and young people, is the thing that the conservative movement is animated right now. It’s what they are radicalizing on….It’s because they and all other parts of the right are working in tandem against America’s multiracial democracy.”
— Host Chris Hayes on MSNBC’s All In, July 1.

“Another Violent Blow Against Democracy”

“In a 6-3 ruling written by Samuel Alito — the most reliably conservative justice — the Supreme Court dealt another violent blow against democracy by upholding two restrictive Arizona voting laws.”
— Host Joy Reid on MSNBC’s The ReidOut, July 1.

The New “Republican Fringe” Wants to Install a “Dictatorship”

“Not too long ago, our idea of the Republican fringe were people in tri-corner hats getting angry about taxes and a black president. Well, this new fringe ate that fringe for breakfast and it’s taken over the mainstream Republican party. And it all culminates in that new bizarro world, Republican ideology doing everything in their power to make it so hard for you to vote that you can never vote them out. And you know what they call that? A dictatorship.”
— Host Joy Reid on MSNBC’s The ReidOut, July 14.

Getting Tough On Biden, From the Left

“Why is protecting the filibuster, is that more important than protecting voting rights, especially for people who fought and died for that?...You agree with the former President [Barack Obama], he has called — as you called him, your old boss, that it is a relic of Jim Crow….If it’s a relic of Jim Crow, it’s been used to fight against civil rights legislation historically. Why protect it?”
— CNN Tonight host Don Lemon to President Joe Biden on Joe Biden: CNN Presidential Town Hall, July 22.

And We Thought They Liked Communist Cuba

“I despise a dictatorship, I despise authoritarianism, and I do not want the people of Cuba to suffer under that repressive regime. I believe the blockades need to be lifted so the people don’t suffer. They’re having shortage of food down there. It’s outrageous, and this is why I rail against voters’ rights in this country because it is a — it is a slippery slope to a dictatorship when people can’t vote, and we have to watch our own democracy very carefully right now.”
— Co-host Joy Behar on ABC’s The View, July 12.

“LISTENING 2 SAM COOK’S ‘A CHANGE IS GONNA COME’,& 😭. WONDER WHAT HE’D THINK ABOUT 1/3 OF🇺🇸RIPPING FREEDOM FROM BLK, BROWN, OLD, POOR.
GOP KNOW THEY CANT WIN DEMOCRATIC WAY SO THEY’LL DO IT BY WHITE DOMINANCE”‼️INSTEAD OF IDEAS THEY HAVE HATE.trump WILL KILL🇺🇸IF WE DONT VOTE IN’22”...
“Pls listen 2 Sam  Cooke’s ‘a Change is Gonna Come’.WHEN WILL WE STAND SHOULDER 2 SHOULDER WITH BLK BROTHERS & SISTERS, WITH EVERY DISENFRANCHISED DEMOCRAT, IN EVERY STATE WHICH HAS NEW DRACONIAN, RACIST LAWS. REPUBLICAN LAWS, AIMED AT WIPING DEMOCRATS OFF🇺🇸’S MAP 4EVER. VOTE(D)2022”
— July 24 tweets by actress/singer Cher.