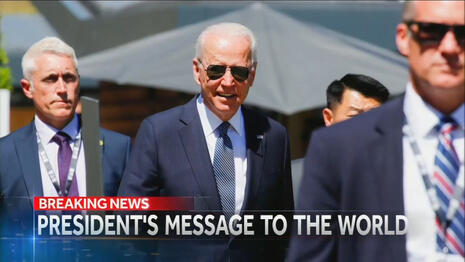 You could practically hear lefty journalists exhale a sigh of relief as they covered a  presidential European trip featuring one of their own and not that last guy.

Network and cable journalists swooned over “Professor Biden’s” “dazzling” overseas jaunt. They happily declared the “era of Donald Trump” over as they cheered on an “energized” Biden engaged in the “diplomatic trip” of the “century.”

The following is top 12 countdown of the most overblown celebrations of Biden’s EuroTrip in the last week:

Anchor Lester Holt: “Meeting with fellow NATO ministers in Brussels today, President Biden declaring the military alliance and its core foundation of mutual defense are ‘rock solid,’ as he works to nurture a relationship derided by President Trump when he was in office.”
Correspondent Peter Alexander: “President Biden’s arrival here at NATO heralded by allies as a new chapter. Where former President Trump slammed the trans-Atlantic alliance as obsolete, Mr. Biden today touted the U.S.’s commitment to the group as a ‘sacred obligation.’”
— NBC Nightly News, June 14.

“We begin tonight, with President Biden reaffirming America’s role on the global stage. At the NATO summit in Belgium today, the President called the military alliance critically important to U.S. interests, saying unity is NATO’s greatest strength. The cooperative tone of this meeting was in stark contrast to the previous four years.”
— Substitute anchor Major Garrett on CBS Evening News, June 14.

10. “Relieved” That At Least Biden Isn’t You Know Who

“He [President Joe Biden] was welcomed back by his European allies who were so relieved that he wasn’t his predecessor.”
— AP reporter Jonathan Lemire on MSNBC’s Morning Joe, June 17.

“It was a dazzling afternoon for tea at Windsor Castle. Queen Elizabeth II hosting President Joe Biden and First Lady Dr. Jill Biden at Windsor, the nearly thousand-year-old castle where she has spent much of her time since the pandemic. The pageantry fit for a queen, or in this case, a president. The President taking part in an inspection of the guard of honor. [Footage of Donald Trump with Queen Elizabeth] This time, no obvious hiccups.”
— Correspondent Andrea Mitchell on NBC’s Today, June 14.

Co-host Anthony Mason: “He’s [Joe Biden] also been drawing a stark contrast with the America First stance of his predecessor....Ed O’Keefe is in Brussels. Ed, what’s the President hoping to accomplish there?
Correspondent Ed O’Keefe: “The President’s hoping to build on what he called a series of productive meetings at the G7 over the weekend in England as he tries to restore relationships with NATO allies after four years of a frayed relationship with the last administration.”
— CBS This Morning, June 14.

“So much of this first foreign trip for President Biden has been really about trying to convince allies that the era of Donald Trump is over. These differences, they are on full display here this morning in these meetings under way right now. President Trump, he said NATO was obsolete. Just a few minutes ago, President Biden said these NATO alliances are a sacred obligation.”
— Correspondent Cecilia Vega on ABC’s Good Morning America, June 14.

6. “Strong Leader” of the “Alliance” Biden Proves “America’s Back”

“I think the point is that this theme, ‘America’s back,’ now has a practical face. And that’s Biden. He’s calm, he doesn’t take the bait. People say, you know, is Putin a killer? He wants to — he just refuses to repeat that on the eve of his meeting with Putin, because he’s a lot calmer and more comfortable in his position as a leader. So, on the eve of the meeting with Putin, which really does matter, I think Biden can say he got everything out of this trip so far that he would have wanted....America’s strong, our economy is growing like gangbusters, we vaccinated this huge percentage of our population. He is the strong leader of this alliance and showed it in England and in Brussels.”
— Washington Post Editor David Ignatius on MSNBC’s Morning Joe, June 15.

5. Is Putin Ready for “Energized” Biden?

4. “Professor Biden” Rose “Above” It All

Host Chuck Todd: “He [President Joe Biden] tried to embrace the areas where he thought Putin did want to embrace as well. It was — it’s just an interesting posture….As one point I wrote ‘Professor Biden,’ because I thought he was basically trying to be above it, be above the meeting.”...
Correspondent Kasie Hunt: ““So that phrase ‘rise above’ is exactly the one I was going to use, because he [Biden] even walks out onto the stage, looks at the reporters and says, ‘Oh, I just finished my last meeting. I know you guys were most interested in this one but I had all these other meetings.’ That was so carefully choreographed to show he was embracing our allies in a way the previous administration, the previous president, didn’t.”
— MSNBC’s Meet the Press Daily, June 16.

“It’s worth noting that Joseph R. Biden began his presidency declaring American diplomacy is back. Today, he said all foreign policy is the logical extension of personal relationships. And that is the test and perhaps the legacy-defining moment for President Biden, whether his personal relationships will change anything as our 46th president makes the case that diplomacy, dialogue, and democracy are America’s greatest exports.”
— Anchor Norah O’Donnell on CBS Evening News, June 16.

2. CNN Oozes: Look How “Comfortable” Biden Is “Taking Off His Jacket”

“He [Joe Biden] was comfortable in that moment, taking off his jacket, answering these questions from top foreign policy reporters in the audience that he doesn’t always call on. Wolf, as we assess this trip, this is why Joe Biden ran for president. This is why he decided to come back into the arena, to challenge former President Donald Trump, because he wanted to strengthen the transatlantic alliance.”
— Correspondent Jeff Zeleny on CNN Newsroom, June 16.

1. Best “Diplomatic Trip” of the “Century,” Biden Assembled the “Avengers”

Host Joe Scarborough: “I’ve been going back through my mind….maybe you can come up with a better week in American diplomacy overseas, over the past 20 years of the 21st century? I’ve been trying to figure it out, over the past 12 hours. I can’t think of a more successful diplomatic trip in the 21st century than this one….It ain’t nothing to get the United States of America and the EU on the same page….When we’re getting that team together….that’s calling the Avengers together. It’s pretty damn good.”...
BBC World News America Washington anchor Katty Kay: “Biden rallied his posse.”
— MSNBC’s Morning Joe, June 17.