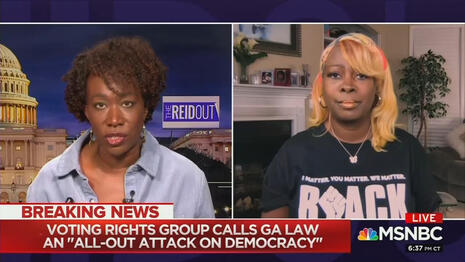 For over a month the media joined their allies in the Democratic Party in browbeating corporate America and the public into believing that an “immoral” and “racist” Republican Party has been waging a “holy war” to bring back “Jim Crow” laws to “torture” black Americans.

The most recent efforts to label the GOP a bunch of bigoted vote-suppressors (something the lefty media has been doing for the last decade) occurred when Georgia Republicans passed an election law that even the liberal Washington Post admitted was “less strict” than voting laws in deep blue states like Connecticut and Delaware.

The following is a compilation of the ugliest depictions of the Georgia law since its passage from lefty hosts, correspondents and pundits:

Republicans Would Deny Water to Jesus on the Cross

Host Joy Reid: “Do you think that Joe Biden is ready to….get rid of the filibuster?”...
MSNBC political analyst Michael Eric Dyson: “What he needs to do is fill these busters with some fear of the government. These are the kind of people who would pass a law to keep Jesus from be — getting a cup of water while he’s dying on the cross.”
Reid: “Yeah, that is sad but true.”
— MSNBC’s The ReidOut, March 26.

“Why do you [Republicans] bring back the most odious laws suppressing the black vote, almost by design, since Jim Crow? You want a nice activity? Google ‘Jim Crow Laws’ in states where they existed and compare them to the language, phraseology, and the intention of what’s sold in over 40 states right now, some 250 plus bills. Take a look and be shocked at the similarity….This is becoming some kind of perverse holy war for you guys.”
— Host Chris Cuomo on CNN’s Cuomo Prime Time, March 15.

“We have to stop these people [Republicans] at every single turn because they will take America back to the 1930s, ’40s, and ’20s, and make sure that nobody who’s not a straight white male Christian is actually able to vote and exercise their right in this country.”
— MSNBC contributor Jason Johnson on MSNBC’s Deadline: White House, March 18.

Host Jonathan Capehart: “To my mind, it seems like the party is foregone. It’s done.”...
Former NBC News, Washington Post and current reporter for FiveThirtyEight.com Perry Bacon: “All the Republicans are defending this Georgia law….from all wings of the party essentially. The Republican Party is pretty organized and actually has some policies which are basically, ‘how do we maintain the existing racial and economic status quo?’...They have an agenda….Make it harder for Black Lives Matter people to protest….weaken public schools….Make it harder for people to vote in states all over….One reason why they’re continuing on a course that is in some ways immoral and some ways racist is because this course is not as bad electorally as I thought it would have been.”
— MSNBC’s The Sunday Show with Jonathan Capehart, April 11.

GOP Is “Cheating” To Prevent “Browning of America”

“I did grow up under Jim Crow laws. And Jim Crow laws, remember, never said black people couldn’t vote because that would have been clearly unconstitutional and illegal and out of bounds. What they were, were laws, on their face, applied to everyone but were designed and enforced to deny voting rights to African Americans. And, you know, if this not a complete and total verbatim repeat of that, it is certainly a very close rhyme.”
— Washington Post Associate Editor Eugene Robinson on The 11th Hour with Brian Williams, April 7.

“Basically what we are seeing that happened in Georgia, with the Republican legislation, is that they are corking the bat and putting resin on the ball. They are cheating. They were the ones that created the current, existing laws on the books.”
— Voto Latino President and NBC News contributor Maria Teresa Kumar on NBC’s Meet the Press, April 4.

“Why doesn’t he [Georgia Republican Governor Brian Kemp] go all in and embrace the rich heritage, the hard fought well-deserved tradition in Georgia for voter suppression? That would be new and remarkable.”
— Host Brian Williams on MSNBC’s The 11th Hour, March 31.

“Jim Crow Is Making a Comeback”

Boycott An Entire State, Even If It Hurts Black Businesses There

“While Jackie Robinson’s home state enacts laws designed to keep people of color from voting is beyond mere hypocrisy. It is forcing players to participate in a humiliating sham, a virtual minstrel show of racist propaganda....If the baseball players will not or cannot boycott, the consumers must. Fans must boycott the Jackie Robinson Day game and the All Star Game telecast on Fox....After sports, we boycott movies filmed in Georgia and consumer businesses based there, like Delta Airlines and Coca Cola. The list of economic punishments for racism, which we can accomplish, is endless. We already went through this shit with Georgia in 1862. And in 1962. Boycott Georgia.”
— Former MSNBC host Keith Olbermann in YouTube video posted March 26.