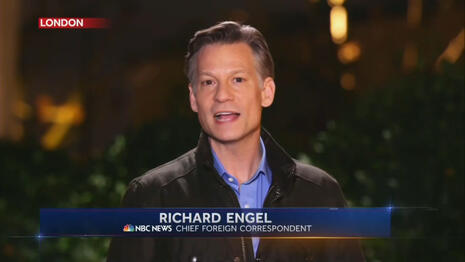 Even before states had been officially called on election night, lefty journalists began dancing on Donald Trump’s electoral grave as they celebrated a Joe Biden win and cursed Trump’s legacy.

CNN anchor Anderson Cooper mocked that Trump was “like an obese turtle on his back flailing in a hot sun.” NBC News correspondent Richard Engel cheered “Much of the world is reacting to President Trump’s defeat as if Americans toppled a dictator.”

His NBC colleague terrorism analyst Malcolm Brown sneered that his voters have a “a level of fanaticism I’ve only seen in some cult groups and Middle East terrorist groups.”

The following are just some of the most obnoxious examples (since election night) of liberal journalists jubilantly declaring victory over their most hated foe Donald Trump:

Ding Dong the Dictator is Dead!

“Much of the world is reacting to President Trump’s defeat as if Americans toppled a dictator….Congratulations have poured in for President-elect Biden. That’s normal. What’s not is the sense of relief that America First isolationism is over. The mayor of Paris tweeted, ‘Welcome back, America.’ When President Trump was elected, a German magazine showed him decapitating the Statue of Liberty. In the new edition, President-Elect Biden is restoring it.”

CBS Evening News anchor Norah O’Donnell: “While there is disappointment among President Trump’s supporters and Republicans, there is also a sense of euphoria in this country.”

CBS This Morning co-host Gayle King: “Yeah. I called it unbridled exuberance. It’s like, Norah, the country is having a nationwide block party….You feel it. The joy is palpable out there….The weather was so beautiful….It’s almost like Mother Nature was cooperating on this day.”

“The only night that I....recall that really feels like this one was the night that Augusto Pinochet was defeated in....Chile and the country was going to return to democracy after 17 years of his autocratic rule.”

“I really thought America was on the ballot. I thought America was on the line. Everything we stood for as a country, everything we promoted in the world was at stake, that we could, like any country can choose a bad leader for a short period of time and get over it, but if we had gone for four more years of this man, every norm we have, every value we cherish, every institution that we’ve elevated throughout our history would be corrupted by this man….This terrible, terrible man, he turned America into a country whose model was show me the money and get the hell off my lawn. And I am so happy he has been defeated. We have so much work to do, but we have been saved.”

Trump Has Founding Fathers Rolling In Their Graves

Host Jake Tapper: “We all were hoping that the President would not go there and lie and falsely and prematurely declare victory….It is shocking.”...

Correspondent Jim Acosta: “I think our Founding Fathers are probably rolling in their graves right now. They did not envision a President of the United States delegitimizing an American election. And that is what the President just did a few moments ago. It’s historic and it’s historically awful. ”

Trump Is “Flailing” “Like an Obese Turtle on His Back”

“I don’t think we’ve ever seen anything like this from a President of the United States….it’s sad and it is truly pathetic, and of course, it is dangerous….He talked about things that he’d seen on the internet. That is the President of the United States. That is the most powerful person in the world and we see him like an obese turtle on his back flailing in a hot sun realizing his time is over, but he just hasn’t accepted it and he wants to take everybody down with him, including this country.”

Pained By Trump’s Undermining of Democracy

“I think that the world is watching and they’re watching an American President undermine democracy in the United States. It’s painful to those of us who love America. It is painful and dangerous what he’s doing.”

Co-host John Berman: “This morning, the President-elect of the United States is calling for unity, and a collective effort to fight a raging pandemic.”

Joe Biden: “This election is over. It’s time to put aside the partisanship, and the rhetoric that is designed to demonize one another.”

Republicans = “Biggest Threat to Our Democracy Since the Civil War”

“All over the world, there are soldiers — men and women — on post right now in Syria, in Iraq, in Afghanistan ready to make the ultimate sacrifice for their country. And these Republican Senators and senior officials who are backing Trump in this ridiculous wild goose chase, they will not make the smallest sacrifice. These are people, Chris, who will not risk $174,000 in salary and free parking at National Airport to stand up and say the right thing. It is not only shameful, this is actually, Chris, the biggest threat to our democracy since the Civil War.”

“It’s not just President Trump that has been eroding norms of decency and he’s had a lot of help from a lot of people on Capitol Hill. We’ll see whether or not they want to come back to planet Earth and be good boys and girls and be decent and normal and adhere to facts and truth. I would say as a journalist trying to uphold along with everyone here those norms, come on in. The water is fine.”

Biden Saved the “Republic” and Ended the “Long National Nightmare”

“The deficit of decency, the deficit of hope, the ascendance of fear, the ascendance of selfishness that we have seen in this country will not totally end with any single election, but a single election can surely help. And what was on the ballot here was decency and democracy and empathy and Joe Biden is particularly well-equipped for this moment.”

“We’re just watching the scenes of celebration in cities throughout the country. This is Washington, D.C., right now and I think it has to be said, a lot of this is relief...A lot of this is not, ‘Oh, great, now the minimum wage will go up to $15 an hour,’ which it probably won’t because Republicans still control the Senate. A lot of this is not necessarily about the Green New Deal. A lot of this is….‘I’m not going to have a President much longer who dislikes immigrants or says things that are racist.’”

Trump Made America “a Nastier Place”

“When you’re the President of the United States, your words speak louder than your actions. And his words every day made America a nastier place and a more toxic place.”

“Trump doesn’t seem to like anybody. He may have a particular disdain for black people, he may have a particular disdain for children at the border….I don’t even think he likes his kids….America by the slightest of disturbing margins decided they wanted to pick someone who doesn’t actively dislike the people who gave him the job….If Joe Biden becomes President of the United States — and I hope that he does because he’s not a dictator in the making….I will immediately turn around my hat and be excruciatingly critical of him because you cannot come into this White House with the idea these people aren’t the enemy. They are.”

Trump Era of  “Cruelty” and “Meanness” Is “Coming to an End”

“It has also been a time of extreme divisions. Many of the divisions caused and exacerbated by President Trump himself....It has been a time where truth and fact were treated with disdain. It is a time of cruelty where official inhumanities such as child separation became the official shameful policy of the United States. But now the Trump presidency is coming to an end, to an end, with so many squandered opportunities and ruined potential, but also an era of just plain meanness. It must be said to paraphrase President Ford, for tens of millions of our fellow Americans, their long national nightmare is over.”

Trump Voters Have a “Middle East Terrorist” Level of “Fanaticism”

“The 69 million people that voted for Donald Trump….have revealed themselves for the racists that they are….almost a level of fanaticism I’ve only seen in some cult groups and Middle East terrorist groups.”

Depressed That Trump Didn’t Lose in a Landslide

“It felt like a repudiation was coming. And I think even though we intellectually understand what America is at its base, right? That there is a great amount of racism, anti-blackness, anti-wokeness, this idea that political correctness is some sort of scheme to destroy white America, right? Like, we know what this country is….I think part of your heart says, you know what, maybe the country’s going to pay off all of this pain, that the children were stolen, with a repudiation. And as the night wore on and I realized and it sunk in, okay, that's not happening. We are still who we thought, you know, unfortunately.”

“The President of the United States castrating the facts of the election results that have been reported tonight, falsely claiming that he has won the election and disenfranchising millions of voters whose ballots have not been counted sadly because of the raging pandemic and the failures of the administration to contain the pandemic.”

“This is so disturbing, is, because the message that it sends to his supporters. This is why people are boarding up the — the stores because he sends a message to his supporters that when the true count comes out, maybe it will be in his favor, maybe not. But if it’s not in his ….favor, he has already planted the seed that this election has been stolen from him. And that’s why this is such a dangerous thing he’s just done.”

“What scares people is that if he [Donald Trump] decides to do something that legally makes no sense….If somehow they manage to stumble into the Supreme Court, do any of you trust Uncle Clarence and Amy Coney Barrett and those guys to actually follow the letter of the law? No.”

As They See It and Decree It

“The role of declaring a winner of the presidential election falls to the news media. The broadcast networks and cable news outlets have vowed to be prudent. Here’s how it will work.”

“This is a marker of a fascistic enterprise — an authoritarian-ish movement that has taken root in American soil like a noxious weed and an invasive species….Someone smarter than me has to explain to me the difference between the armed militia people and Hitler’s SA circa 1928, 1929. They’re an armed, politicized movement in this country that’s faithful to Donald Trump, and we know that because they’ve been quite explicit about it.”

“For the past four years, this President has shown us that he is a misogynist, that he is homophobic, that he is racist, and that he mismanaged a coronavirus pandemic to the tune of over 250,000 American deaths. Yet 50 percent of America saw all of that and looked the other way to their brothers and their sisters and said, ‘I’m going to vote for him anyway,’ and that is really disheartening because for me, that means that you are selfish, right?...That tells me that they will look the other way to that kind of behavior to the plight of their fellow Americans if personally they feel that they are doing okay and that they will do better under that type of presidency, and that I think is despicable. It is un-American.”