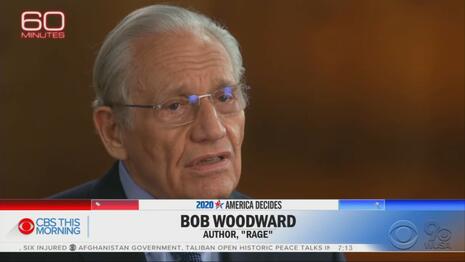 Breathlessly they asked: Did Donald Trump intentionally mislead the public about the severity of the pandemic? Of the selected interview clips, CBS This Morning host Gayle King likened it to the mother of all presidential scandals: “It’s being compared to the Watergate tapes and to a smoking gun.”

On Sunday night’s 60 Minutes, correspondent Scott Pelley set-up Woodward as an objective truth-teller, so as to make his anti-Trump conclusion seem especially meaningful, as seen in this back-and-forth:

Bob Woodward: “The President is the wrong man for the job.”

Scott Pelley: “But you're known as the reporter who doesn't put his thumb on the scale, and yet at the end of this book, you do just that.”

Woodward: “It’s a conclusion based on evidence.”

If it all sounds familiar, it is: the commotion over the leaks and Woodward interviews follows a pattern when it comes to his previous books that bash GOP presidents.

For his book State of Denial, all three morning shows (December 28, 2006) featured a Woodward interview with then-recently deceased former President Gerald Ford, in which Ford criticized the Bush administration for its decision to go to war with Iraq.

On ABC’s Good Morning America, anchor Robin Roberts, substitute co-host George Stephanopoulos, and reporter Claire Shipman seemed disappointed that the former president had not come forward publicly with his criticism prior to his death, saying that it could have made a difference in the U.S.’s decision to go to war:

Shipman: “...He would have made a big difference if he had done this, obviously, before he died.”

Stephanopoulos: “Oh, can you imagine had he come out--to have a former president, a Republican former president, come out and criticize the--President Bush, especially if it was in early 2003, it could have made a huge difference.”

NBC’s Today show also began their program with the Ford interview, starting with this Matt Lauer introduction: “Good morning. A big mistake. That’s what the late President Gerald Ford called the Bush administration's justification for going to war in Iraq, in a revealing interview held until his death.”

Former President Gerald Ford [audio tape]: “And I just don’t think we should go hellfire damnation around the globe freeing people, unless it is directly related to our own national security.”

During his 60 Minutes sessions aired April 18, 2004 with Woodward for his book Plan of Attack, CBS's Mike Wallace mocked President’s Bush’s smarts and belief in freeing people from oppression. Wallace demanded: “Who gave George Bush the duty to free people around the world?” Wallace also jeeringly proposed: “The President of the United States, without a great deal of background in foreign policy, makes up his mind and believes he was sent by somebody to free the people -- not just in Iraq, but around the world?”

Woodward shared Wallace’s concern: “It is far-reaching, and ambitious, and I think will cause many people to tremble.” Having established Bush’s irrationality, Wallace moved on to wondering “how deep a man is President George W. Bush?” Woodward contended: “He is not an intellectual. He is not what I guess would be called a deep thinker.”