Violent CHOP Goes Down, But the Media Told Us It Was a Fun ‘Street Festival!’ 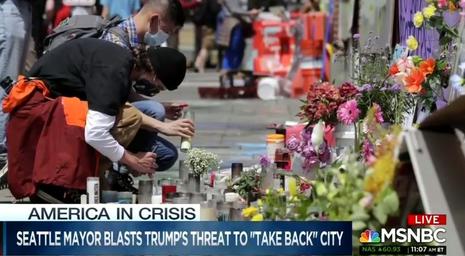 After five shootings and two deaths in the last three weeks, the CHOP zone was finally taken down by Seattle authorities on Wednesday. But if it were up to the lefty news media, that zone and other protest areas in big cities would probably still be up and running as they brazenly attempted to soft-sell them as fun “street fairs” full of messages of “peace and community.”

The following is a look at some of the more absurd attempts by lib reporters to portray the protest zones as peaceful fun-filled “street festivals.”

“A Street Fair?” Sounds Like Fun! Bring the Kids!

“After multiple nights of violent clashes, police in a show of de-escalating tensions in the Capitol Hill district boarded up their station and left. Now the area called the Capitol Hill Autonomous Zone, or CHAZ, is controlled by mostly peaceful protesters....The autonomous zone has turned into an almost street fair-like atmosphere with free food, art displays, and outdoor movie nights. But there have been some reports of armed people patrolling the street in lieu of police.”
— Correspondent Anna Werner on CBS This Morning, June 12.

The “Real Story” of “Peace and Community”

Correspondent Vaughn Hillyard: “You had very peaceful week here on these streets....I think it’s important to note, Stephanie, this is not some hostile takeover....It’s a lot of folks doing their part to put out a set of demands they want to see....Not just on criminal justice issues but also education, health care, economic issues here....What you saw here over the weekend were thousands coming in to spread that message. Stephanie?”
Host Stephanie Ruhle: “That message of peace and community. Vaughn, thank you so much. It’s so important to have you there showing us the real story.”
— MSNBC Live with Stephanie Ruhle, June 15.

Correspondent Vaughn Hillyard: “After more than a week of clashes between the demonstrators and the police, now you see almost like a street festival-type atmosphere, a street-festival type atmosphere....with a very intentional purpose.”...
Unidentified protester: “It is not a street festival! Do not say that! Shame on you for saying that!”
— MSNBC Live, June 13.

“This particular neighborhood where this six-block radius has become this so-called autonomous zone, is very much a — has its own life within itself. And over these last nights, you’ve had thousands of folks walk through. When you’re going through, it’s more like a pedestrian street festival of sorts. You have folks — these restaurants are open, there’s couches in the middle of the road, there’s gardening taking place.”
— Correspondent Vaughn Hillyard on MSNBC Live, June 12.