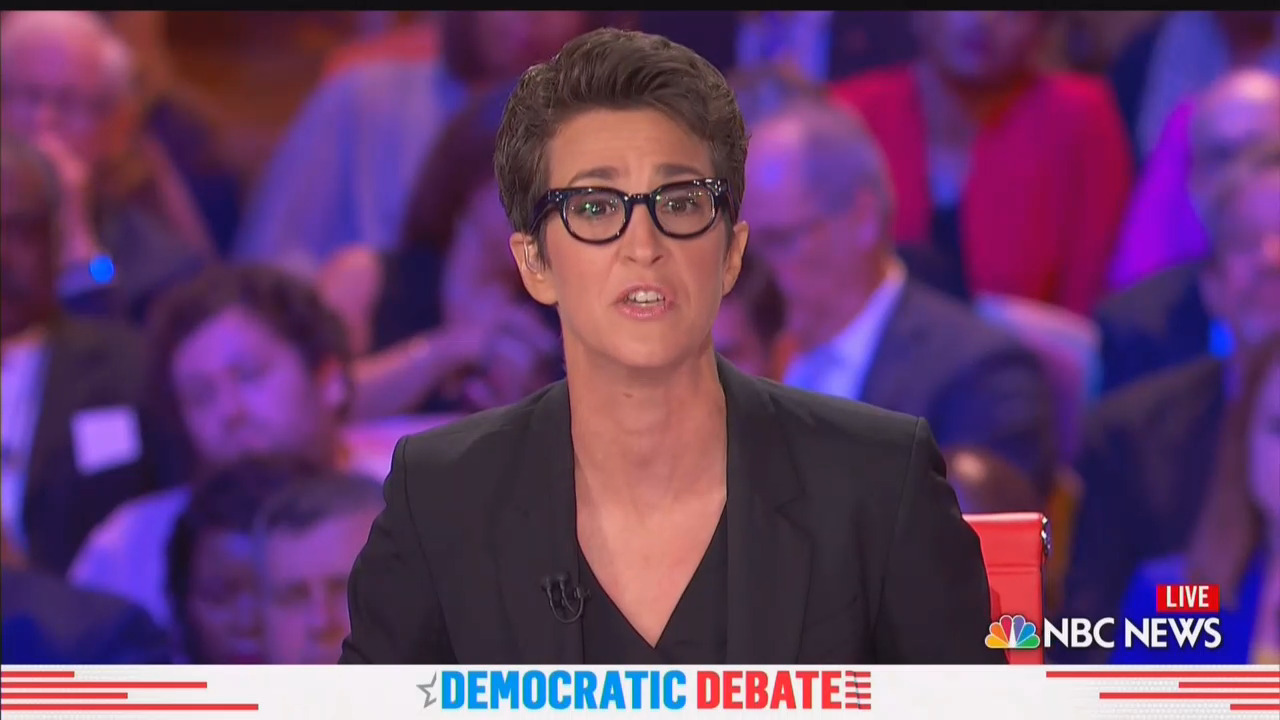 MSNBC has tabbed a Bernie booster (Rachel Maddow) and Joe Biden fan (Andrea Mitchell) to be the lead moderators for Wednesday’s Democratic debate. So it’s a good bet the questions won’t be coming from the right.

It won't be the first time: In June, MSNBC hosted a two-night debate event where 69 percent of the questions to the very liberal field of candidates were from the left.

Maddow – who asked her share of those liberal questions at the last debate – has cheered on Bernie Sanders and linked Donald Trump to Hitler. Mitchell once wondered if Biden had a Rocky Balboa-like comeback in him and has spent a career fawning over the likes of Hillary Clinton and even Fidel Castro.

Mitchell and Maddow will be joined by fellow Trump critics MSNBC correspondent Kristen Welker and Washington Post reporter Ashley Parker. The following are just a few examples of Wednesday night’s debate moderators’ history of liberalism, as culled from the MRC’s archives:

“You’ve been preparing for this your whole life in some ways....You’ve turned out these big crowds. You inspired 200,000 volunteers. You moved people....It is a remarkable thing, as a liberal, to see the success you’re having, the resonance that your message is having and I don’t know what’s going to happen in the campaign long term, but good luck to you, sir.”
— MSNBC’s Rachel Maddow to Democratic candidate Bernie Sanders on The Rachel Maddow Show, September 17, 2015.

“What’s the worst-case scenario for America if he [Donald Trump] wins? It can be pretty bad. You don’t have to go back far in history to get to almost apocalyptic scenarios....Over the past year I’ve been reading a lot about what it was like when Hitler first became chancellor. I am gravitating toward moments in history for subliminal reference in terms of cultures that have unexpectedly veered into dark places, because I think that’s possibly where we are.”
— MSNBC host Rachel Maddow in a July 12, 2016  interview with Rolling Stone magazine.

“I’m thinking about President Obama, too. I mean, to have the first African-American President succeeded by a guy who was endorsed by the KKK...and have that be the succession to the first black president, it’s a big deal.”
— MSNBC anchor Rachel Maddow on MSNBC’s live election coverage 2:37 am ET, November 9, 2016.

Trump Could Be “Gateway Drug” for KKK Becoming Mainstream in GOP

“One thing that’s getting traction on social media is the response to Donald Trump’s speech from David Duke, the former Klan leader....He says ‘Great Trump speech, America first, stop wars, defeat the corrupt elites, protect our borders, fair trade, couldn’t have said it better,’ meaning ‘couldn’t have said it better myself.’ And a lot of people who are critical of Donald Trump generally look at praise like that from someone like Donald [sic] Duke and wonder if he’s a gateway drug, if there is something beyond Donald Trump himself, that means a much greater transformation of the Republican Party into something that is going to be new to mainstream politics.”
— Anchor Rachel Maddow after Trump’s speech during MSNBC’s live coverage of the GOP convention, July 22, 2016.

“I think it’s upsetting, I think, to a lot of people, both the state of abortion rights around the country and what’s going on in Missouri, but the fact that they’re doing that to these women on order of that state government is just sort of horror movie disturbing.”
— MSNBC host Rachel Maddow on NBC’s Late Night with Seth Meyers, June 11, 2019.

“[Philadelphia Eagles quarterback] Nick Foles said the other day, ‘Don’t be afraid to fail, failure is part of life. It’s part of building character. Without failure, who would we be?’ Does that inspire you when you think about – you’ve run for president twice – when you think about the future?...So is there some part of Joe Biden who’s identifying with Nick Foles and the team as they climb the steps of the art museum today? Is there a part of you that thinks about Rocky Balboa?”
— Host Andrea Mitchell’s questions to former Vice President Joe Biden on MSNBC Live, February 8, 2018.

Host Andrea Mitchell: “You posited that it’s either incompetence or evil. I would suggest that it could be both – that there is an evil desire to deter by making an example of these people, and then it was carried out with no planning – and that is the rank incompetence that makes it even that much worse.”
MSNBC Legal Analyst Mimi Rocah: “Absolutely, and you’re right. It shouldn’t be presented as an either, or. It could be both.”
— Discussion of Trump administration immigration policy on MSNBC Live, July 10, 2018.

“I do think that he [Donald Trump] has very deliberately set up the press as the enemy of the people. I don’t feel that I am the enemy of the people. And it’s not benign....You know, this is something that we first heard from Joseph Stalin. This is very dangerous. It undercuts democracy.”
— NBC News correspondent Andrea Mitchell on Comedy Central’s The Daily Show, July 30, 2018.

NBC News correspondent Andrea Mitchell: “I know Trump controls the convention rules committee but I keep thinking they have to find a way not to nominate him.”
General Colin Powell: “I don’t see how. Even Paul Ryan in today’s papers says he has problems, but is sticking with him....I assume he will get the nomination. Then the game is on.”
Mitchell: “It is awful.”
— Leaked e-mail exchange as reported by September 24, 2016 FoxNews.com story “E-mails show NBC’s Andrea Mitchell telling Colin Powell Trump’s nomination is ‘awful.’”

Outraged by “Lock Her Up” Chant

“I really appreciated that [Republican Senator] Jeff Flake said the ‘lock her up,’ those cries at the Republican convention by Michael Flynn no less, the call and response was really a nadir of the Republi – what I view as the Republican Party.”
— Correspondent Andrea Mitchell on NBC’s Meet the Press, August 6, 2017.

“It’s who do you trust? Who has the temperament? And I don’t think she [Hillary Clinton] has to prove her toughness. She’s answered the 3:00 phone call question....She proved her commander-in-chief bona fides in terms of being tough as a gender issue. That’s no longer on the table.”
— NBC’s Andrea Mitchell on MSNBC’s Hardball, September 7, 2016.

“[Barack Obama] invoked the audacity of hope, all of the spirit, all of the creativity of his own brilliant speech writing....I don’t think we’ve ever had a President, save Lincoln, who is as great a speechwriter as this man.”
— Correspondent Andrea Mitchell following Barack Obama’s speech as aired on MSNBC’s live Democratic convention coverage, July 27, 2016.

“Donald Trump, using that word [rape] unprompted during an interview last night with Fox News’s Sean Hannity, bringing up a discredited and long-denied accusation against former President Bill Clinton, dating back to 1978 when he was Arkansas attorney general.”
— Andrea Mitchell on NBC’s Today, May 19, 2016.

So What If Castro Stifled Dissent, He Delivered Crappy Health Care for All

“A declared socialist, he dramatically improved health care and literacy....He never tolerated free elections or dissent but gave his people better health care and education....I think he will be revered as someone who brought education and social services and medical care to all of his people.”
— NBC correspondent Andrea Mitchell during MSNBC’s breaking news coverage of Castro’s death in the early morning of November 26, 2016.

Even When Dems Lose, They Win!

“Even some of the candidates who came up short aren’t being counted out. Instead, getting buzz as future stars of the Democratic Party, including Beto O’Rourke, who put up a tough fight against incumbent Senator Ted Cruz in Texas....And Tallahassee Mayor Andrew Gillum, who went down in defeat in his battle for Florida governor, but keeping the fighting spirit.”
— Correspondent Kristen Welker on NBC’s Today, November 7, 2018.

“I can’t tell you how many times this past week journalists have said ‘what would this news cycle look like if we hadn’t had the 2005 tape of Donald Trump, if these allegations hadn’t come forward from all of these women?’ I mean, we would be almost solely focused on these WikiLeaks. And yet, Donald Trump continues to kind of make these unforced errors.”
— NBC correspondent Kristen Welker on Meet the Press, October 16, 2016.

Counting Chickens Before They Hatch

The “Frenzied, Dark Side” of Trump Supporters

“I just about every single one of his rallies and I want to be clear. I don’t believe and I think it is overly simplistic and unfair and inaccurate to say that all Donald Trump supporters are racist or sexist. But the thing I was struck by was at these rallies I heard phrases and words, racist, sexist, anti-Semitic that in covering other campaigns, Democrat and Republican, I had never heard before and you would never expect to hear in a public forum and I was always struck by it felt like at these rallies a permission structure was created for people to say things and do things that they would never do or very few of them would ever do in regular life and it was very striking. I would be interviewing someone before the rally and they could not be more polite and respectful and more thoughtful and then suddenly the rally started and it just sort of brought out a frenzied, dark side in people and I think that is also some of what we’re seeing here.”
— Washington Post correspondent Ashley Parker on MSNBC’s Deadline: White House, May 29, 2018.