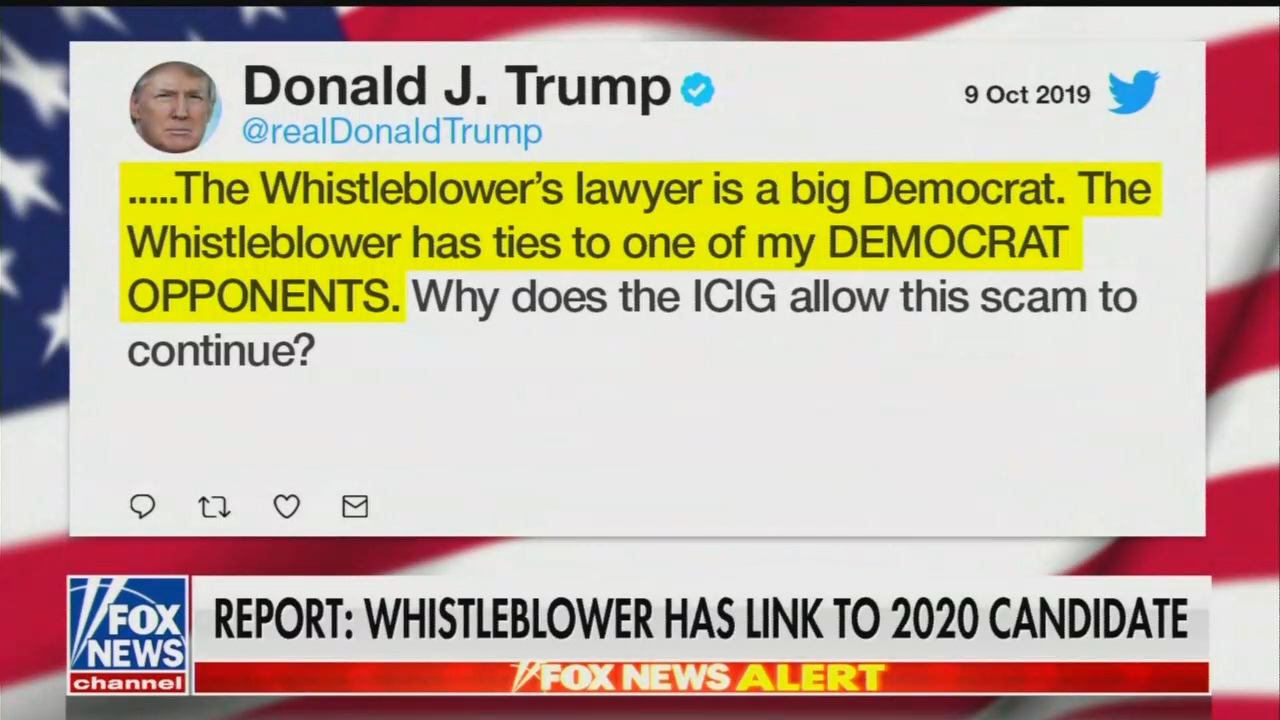 On Tuesday, the Washington Examiner’s Byron York broke the news that the whistleblower that sparked the Trump-Ukraine impeachment push had a “significant tie to one of the Democratic presidential candidates.”

So far ABC and CBS have spiked the story, even with President Donald Trump tweeting about it on Tuesday evening:

“Wow, Just Breaking: “The (big deal) Whistleblower had a  ‘PROFESSIONAL TIE’ to 2020 Democratic Candidate.” Washington Examiner, @ByronYork In other words, was working with someone who was potentially running against me. Why wasn’t this reported by the ICIG? A Witch Hunt Scam!”

On October 8, the Washington Examiner’s Byron York reported the following:

“There is word of more evidence of possible bias on the whistleblower’s part. Under questioning from Republicans during last Friday’s impeachment inquiry interview with [Intelligence Community’s inspector general Michael] Atkinson, the inspector general revealed that the whistleblower’s possible bias was not that he was simply a registered Democrat. It was that he had a significant tie to one of the Democratic presidential candidates currently vying to challenge President Trump in next year’s election. ‘The IG said [the whistleblower] worked or had some type of professional relationship with one of the Democratic candidates,’ said one person with knowledge of what was said.”

The following is a transcript of the only mention (so far) of the York report on the Big Three networks, as aired on the October 9 Today show:

CO-HOST SAVANNAH GUTHRIE: Hallie, overnight the President is seizing on a report about the whistleblower’s bias, political bias, against him. What more do you know about that?

HALLIE JACKSON: Yeah. The President overnight Savannah is tweeting and again this morning about a report that the whistleblower had a professional tie to one of the 2020 Democratic candidates. But the intelligence community inspector general – while arguing that there may be political bias on behalf of the whistleblower  – still concluded that the allegations appeared credible. The whistleblower’s attorney has said that partisanship is not involved here. And keep in mind that the whistleblower’s description of the Ukraine call largely matched the summary that the White House itself put out. Savannah?