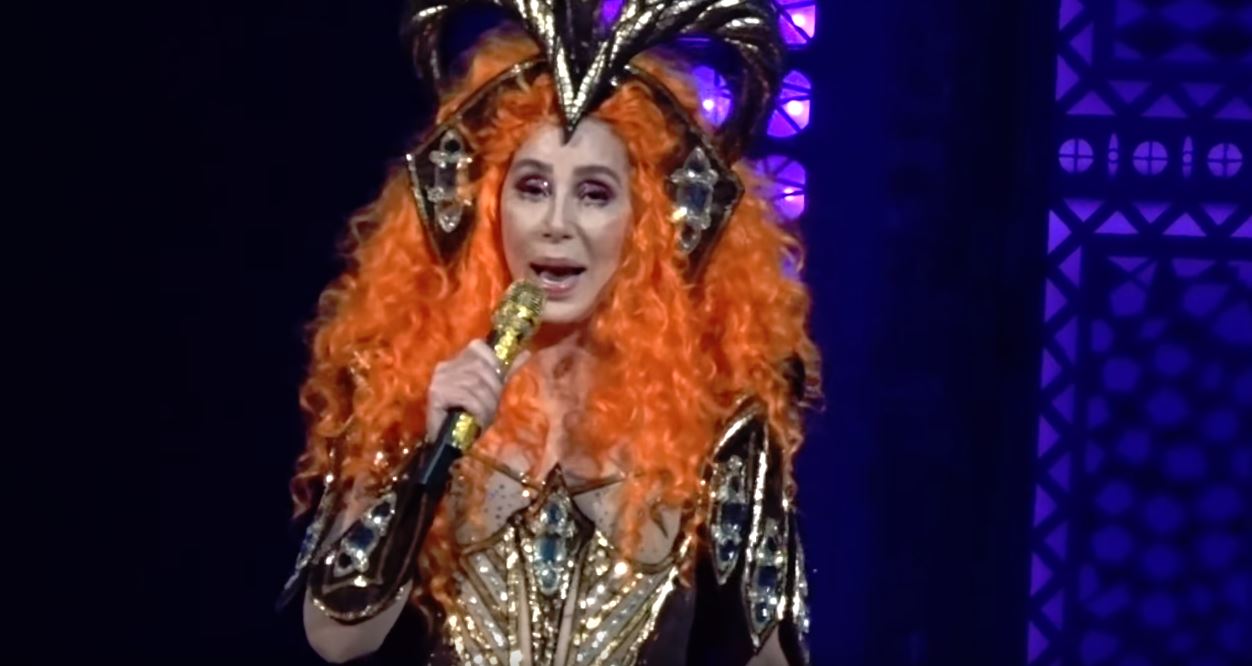 Donald Trump may be the most hated president in Hollywood since...well...ever. In the last month celebrities from Bill Maher to Cher have wished the worst, most vile things on the current president.

Author Fran Lebowitz claimed “impeachment” was just the “beginning of what he deserves” as she fantasized that Trump would be turned “over to the Saudis” to be tortured to death.

New state laws intended to protect the rights of the unborn drew the ire of actors, comedians and producers as they hurled epithets at Republicans as they envisioned that a real-life version of The Handmaid’s Tale was being ushered in by conservatives.

The following is just a sampling of the worst outbursts (this past month) from Hollywood:

Trump Is Haunting Their Dreams Now

“One of the things I stopped doing is do not read the news at night because I was waking up in the middle of the night from nightmares of just screaming. I had one dream....I was in a boardroom. There was a long table, and it was just the guy who’s in the Oval Office right now sitting there, and I walked in, and I was screaming, screaming, don’t you care about the next gen....I was going crazy at him and screaming and yelling, and that was 2016. I woke up in a sweat and I went, ‘Oh, my God I’ve gone insane and I have to stop reading the news at night.’”
— The Good Wife and ER actress Julianna Margulies on CBS’s Late Show with Stephen Colbert, May 20.

Turn Trump Over to Saudis to Be Tortured to Death

“Been Giving IMPEACHMENT MUCH Thought Throughout The Day,& I Would *love* 2 See trump Impeached, Brought 2 Trial, *locked* Up In *prison* & Toy Boy [of] Big Bubba!!”
— May 30 tweet by singer/actress Cher.

“But at the end of the day, aside from, ‘Yeah, I don’t want to pay taxes,’ it’s race. It’s race. This is about – this is about the Republican party – or a wing of it going ‘this is our last chance to save the party.’ And if we don’t, it’s the end of the Republican party and the only way they can do that was to tap the race button and say ‘go ahead, it’s okay.’ And he [Donald Trump] did, and they did. That was the only card they had left to play and they played it and they aren’t going to go quietly.”
— Actor Jeff Daniels on MSNBC’s Deadline: White House, May 20.

“The fact that this guy, this president has completely soiled the Oval Office. Soiled the presidency. And you’ve got a lot of people – and I keep looking at them. I go, ‘when is enough enough?’”
— Actor Jeff Daniels on MSNBC’s The Last Word with Lawrence O’Donnell, May 30.

“I hate that they normalize a man [Donald Trump] who is so abnormal...His approach to the way he speaks, the things that he believes. That there were 500 prosecutors who said if he weren’t president he should be indicted – 500! You can’t get 500 prosecutors...to agree on anything....Tiger Woods took a moment and forgot the significance of it and took time to normalize a monster.”
— Former CNN host and comedian D.L. Hughley discussing Tiger Woods receiving the Presidential Medal of Freedom from Donald Trump, as aired on TV One’s The D.L. Hughley Show, May 7.

“I love the people of Alabama and want to punch their politicians in the cock.”
— May 14 tweet by Comedy Central’s The Daily Show creator Lizz Winstead.

“Stay out of our snatches you bastards.”
— May 15 tweet by TBS’s Full Frontal host Samantha Bee.

“Again. Misogyny is the reptilian brain stem of right wing ideology. It is not a bug. It is the feature. Wake. The. Fuck. Up.”
— May 15 tweet by actor Bradley Whitford.

The Handmaid’s Tale is Real Now 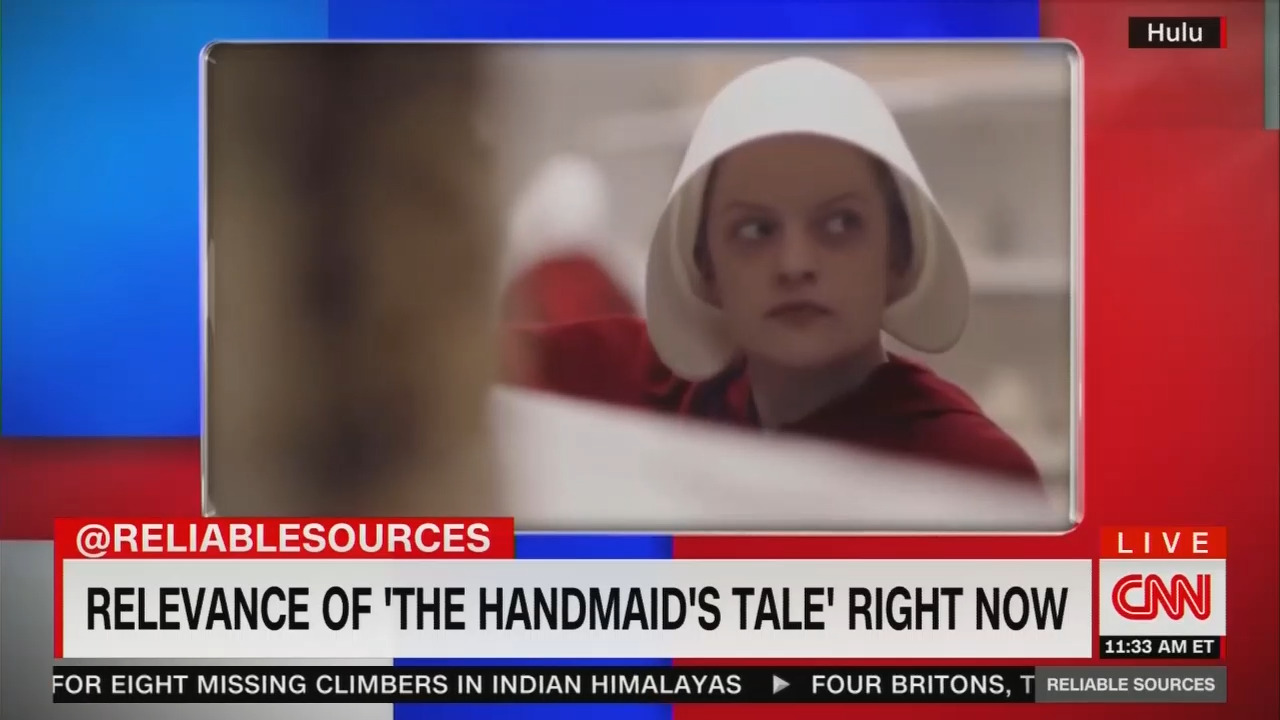 Host Brian Stelter: “Everyone, as they watch Handmaid’s Tale, thinks about what’s happening in this country right now. How close, or how far, do you think America really is to the fictional Hellscape of Gilead?”
Hulu’s The Handmaid’s Tale actress Ann Dowd: “A heck of a lot closer than we were season one, which is terrifying.”
Stelter: “Only a couple of years ago, the country’s gone that far backwards?”
Dowd: “When I saw what was going on in Georgia, I literally thought this can’t be real. It stunned me the degree to what’s going on in the anti-abortion world. I just thought this can’t be America.”
— CNN’s Reliable Sources, June 2.

“Margaret Atwood wrote a speculative fiction 35 years ago. However, she created that world, that world of Gilead, all by using historical fact....It’s a really important warning. We were seeing the rise of the alt-right, Brexit was certainly on the horizon. And now a few years later, we’re feeling it’s arrived. We’re in a very, very slippery slope to Gilead right now....We shot on the steps of the Lincoln Memorial. And it was chilling, because as we were trying to do content that is about human rights and protecting women’s rights, over in the Rose Garden they were talking about eliminating them.”
— Former NBC entertainment chief Warren Littlefield, now Executive Producer of Hulu’s The Handmaid’s Tale as aired on CNN’s Reliable Sources, June 2.

What Happened to Dave? He Used to Be Funny

“There, he seemed like a guy. Were I ever to get the chance to talk to him in person – and I won’t live long enough for that to happen – but I would say, ‘When did you become a goon? When did that happen? You used to be just like a guy.’”
— Former CBS  Late Show host David Letterman on ABC’s The View, May 31.

“Divorce is always easier in pairs. What if you had a buddy Melania? Because there’s also a former model, who’s also married to a super-rich Republican monster. Mrs. Rupert Murdoch, Jerry Hall. And you two have a lot in common: Your husbands are ruining the world....Jerry, you left Mick [Jagger] because he was fucking everything that moved, but Rupert’s fucking the whole planet. The axis of evil in the world now is Trump and Fox News.”
— Host Bill Maher on HBO’s Real Time, May 10.