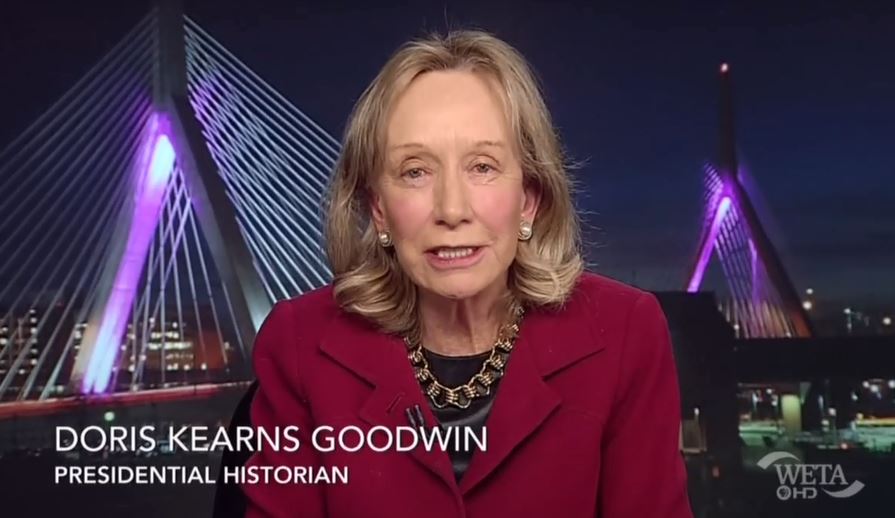 If tonight’s coverage is anything like President Donald’s Trump’s first State of the Union Address look for the media to trash the speech and vilify the President. Of course there was a time the media threw verbal bouquets after the SOTU speech – when Barack Obama was delivering them.

From comparing him to George Washington and Ronald Reagan to lambasting Republican “pettiness” for not genuflecting before Obama the following are the most absurd media reactions to Obama-era State of the Union speeches, as culled from the MRC’s archives:

“It [Obama’s State of the Union speech] reminded me – I mean, this is going to sound ridiculous, like I always think about George Washington, but it reminded me of George Washington’s Farewell Address.”
— Historian Doris Kearns Goodwin on PBS’s Charlie Rose, January 12, 2016.

PBS’s Charlie Rose: “I want to raise two big issues about him that are fascinating to me and, Jon, all of you. How smart is he? What’s the sense of – is he one of our brightest presidents?”
Longtime Newsweek editor Jon Meacham: “Absolutely. I think so and I think it has the pluses and minuses.
Rose: “I’m asking from a real standpoint.”
Meacham: “It’s a keen analytical intelligence.”
— Exchange on PBS’s Charlie Rose, January 12, 2016.

“You have to remember that no president has faced a greater fog of misinformation and outright lies in the public sphere than this president....The lessons that he has had to teach, the elementary lessons of governing that he has struggled to teach this Congress is something that no other president has ever had to go through.”
— Host Lawrence O’Donnell on MSNBC’s The Last Word, January 12, 2016.

“I first met the then-Senator Obama in Cleveland all of the way back in 2006. Back then, they were naming babies after him in Iowa....After tonight, no more of these presidential moments are left to him. America has come to know this couple, this historic First Family, and watched as their girls grew up and watched as their dad grew gray.”
— ABC correspondent Terry Moran during Nightline’s post-State of the Union coverage, January 12, 2016.

Obama vs. Republican “Pettiness” and “Disrespect”

“That one odd moment that a lot of people are talking about this morning, Mr. Vice President, where the President was talking about having arguments that are worthy of the body and the country, and then he said, ‘I’ve run my last campaign,’ and there was a smattering of applause, maybe even laughter from some Republicans and the President shot back. Did you see that as a moment of disrespect? Was it a symptom of the very pettiness that the President was referring to?”
— NBC’s Matt Lauer to Vice President Joe Biden on Today, January 21, 2015, the morning after the State of the Union.

Obama’s Mainstream: Halfway Between a Liberal and an Ultra-Liberal

“The economic message, also, is so politically in tune with where the broad spectrum of the American people are. He’s laying out themes that are equidistant between the Elizabeth Warren and Hillary Clinton branches of the Democratic Party.”
— Correspondent Andrea Mitchell during NBC’s live coverage of the State of the Union speech, January 20, 2015.

Please, Let’s Not Forget How Wonderful Barack Obama Is 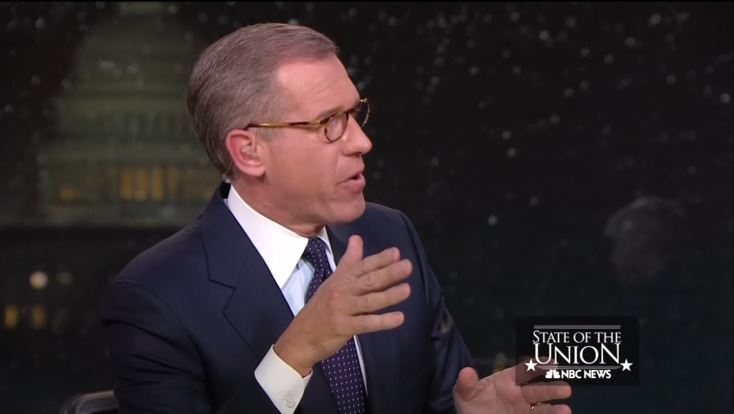 “With all the talk about the President entering this period where ‘lame duck’ has been tossed around, this period in his second term, it was David Remnick in The New Yorker magazine, a long, long article, a long, sustained-access interview with the President over many stops, who put a sentence in the middle of the article to reset everyone’s expectations and remind us what it took to get here. And I’m going to quote from it. ‘A President who after all,’ quote, ‘won two terms as only 17 of 44 presidents have, and did so as a black man with an African father and a peculiar name one consonant away from that of the world’s most notorious terrorist.’ Something I think everybody forgets in the day-to-day game here.”
— NBC’s Brian Williams during live coverage of the State of the Union, January 28, 2014.

Anchor Brian Williams: “How much longer do we put up with, you know, a decade of pessimism about our direction? What’s going to happen?”
Meet the Press host David Gregory: “Well, and it’s so interesting because, look, the economy’s getting better. That’s what this President had to do. He had to make the economy better. And, yet he’s not getting a lot of credit for it.”
— During NBC’s live coverage of the State of the Union, January 28, 2014.

“One of the real puzzles the President has to solve tonight, the economy, doing about as well as it’s ever done in his presidency, as he comes into the chamber tonight, but most people don’t believe it and don’t give him credit for it.”
— ABC’s George Stephanopoulos to former Obama advisor David Plouffe during live coverage of the State of the Union speech, January 28, 2014.

“This was a speech that had some music to it, as they used to say. He coined a few phrases in there, talked about the ‘unfinished task before us,’ sort of reminiscent of what Lincoln said in the Gettysburg Address.”
— Face the Nation host Bob Schieffer during CBS’s post-State of the Union coverage, February 12, 2013.

“His speech was equivalent to Ronald Reagan’s ‘Morning in America’ speech, which was a positive outlook on the world and I think that Republicans can embrace him because of Ronald Reagan. It is very similar to that. It’s positive, it’s optimistic. He actually believes that they’re gonna cooperate with him....From his mouth to God’s ears, they should start cooperating and get this country going and stop this gridlock because it’s not patriotic!”
— Co-host Joy Behar on ABC’s The View, January 25, 2012.

Slobbering Over Obama’s “Reaganesque” State of the Union

“Full of sunny optimism, very Reaganesque, on and on about American exceptionalism in many, many instances and full of Kennedyesque encouragement to break a new frontier. That Sputnik moment was remarkable....”
— ABC’s Christiane Amanpour during coverage of the State of the Union, January 25, 2011.

Anchor Katie Couric: “In many ways, you felt this speech tonight was almost downright Reaganesque. There have been some comparisons made in recent days about how this could be his Reagan moment. Do you think it was in any way?”
CBS’s Jeff Greenfield: “I think there was certainly an effort on several grounds....He kept talking about winning the future and that was always a big theme about Reagan....He was clearly striking rhetorical notes that reminded me of Mr. Reagan.”
— CBS’s live coverage, January 25, 2011.

“If presidential leadership were only about giving speeches, the jackhammers would already be at work on Mount Rushmore. I thought the guy dominated the room, used humor, occupied the middle ground....In many, many ways, this is one of the most conservative speeches that a Democratic president has given since, I think, the middle of Bill Clinton’s time.”
— Newsweek’s Howard Fineman on MSNBC after President Obama’s State of the Union address, January 27, 2010.

“President Obama is so much better when he takes a heated, knotty issue, like civil rights or banking reform, and talks to the country like adults. He is so much better at making us smarter than angrier.”
— The New York Times’s Thomas Friedman in a January 27, 2010 column.

CBS’s Jeff Greenfield: “This was very much like he was in the campaign. He went five or ten minutes without a single applause line. He said ‘let me tell you how we got into this mess,’ he reached out and said to people ‘I’m not giving up my idea that we can change the tone of politics.’...”
Katie Couric: “Well, as Tom Friedman said, ‘He’s better at making us smarter than making us angry.’”
— From CBS’s live coverage following the State of the Union, January 27, 2010.

“On this much, President Obama’s friends and foes could agree: He eludes simple labels. Yes, he’s a liberal, except when he’s not. He’s antiwar, except for the one he’s escalating....In a world that presents so many fast-moving and intractable problems, nuance, flexibility, pragmatism –  even a full range of human emotions – are no doubt good things. But as Mr. Obama wrapped up his State of the Union address on Wednesday night with an appeal to transcend partisan gamesmanship, he was plaintively testing a broader proposition: Is it possible to embrace complexity in a political and media culture that demands simple themes and promotes conflict?”
— New York Times political editor Richard Stevenson in a January 31, 2010 “Week in Review” item.

“You know, I was trying to think about who he was tonight, and it’s interesting: He is post-racial by all appearances. You know, I forgot he was black tonight for an hour.”
— MSNBC’s Chris Matthews during live coverage following the State of the Union address, January 27, 2010.

Spanking Obama With His Own Olive Branch

President Obama at State of the Union: “We face big and difficult challenges, and what the American people hope, what they deserve, is for all of us, Democrats and Republicans, to work through our differences.”
MSNBC’s Dylan Ratigan: “If the President thought that meant Republicans would start jumping onboard his boat, he thought wrong. They’ve taken his olive branch [begins menacingly swinging an olive branch back and forth] and are now using it to hit back against his agenda.”
— MSNBC's Dylan Ratigan during his 4pm ET The Dylan Ratigan Show, January 29, 2010.