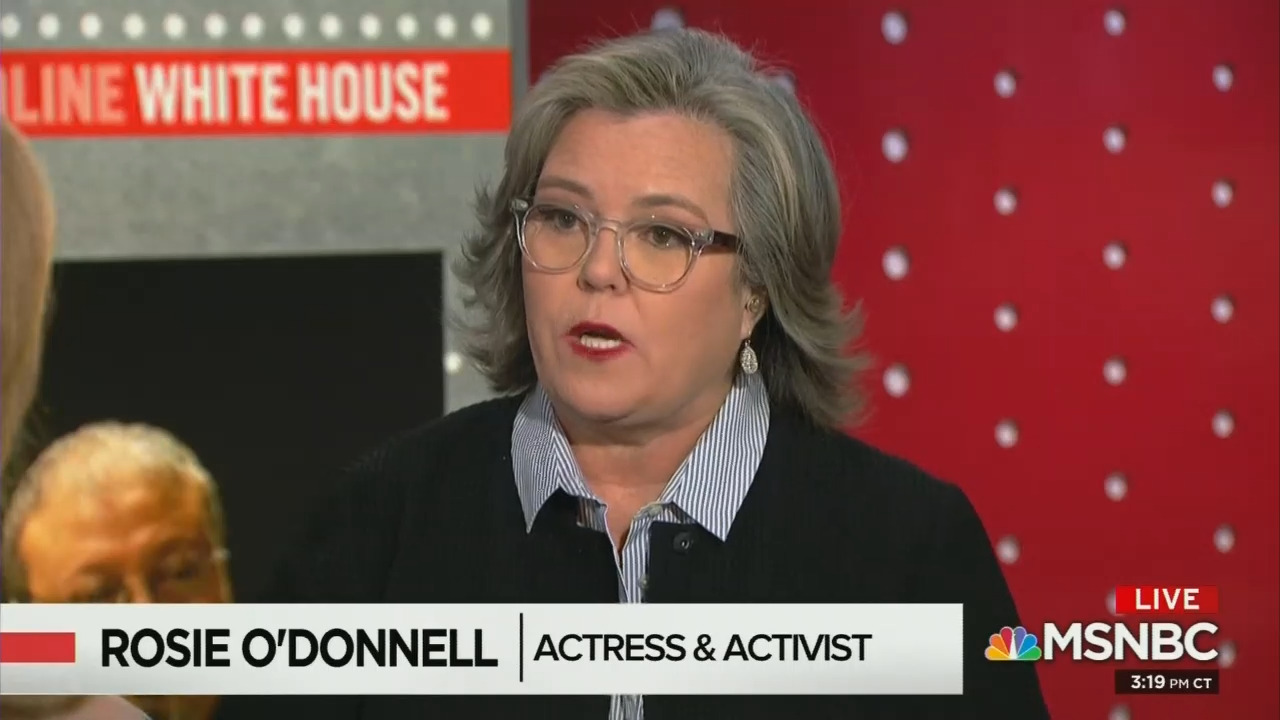 Celebrities that are sick of Donald Trump and the GOP have spent the few weeks leading up to today’s midterms crying about the “raving lunatic” President as they stoked their liberal fans to get to the polls to halt the GOP’s “nascent fascism.”

Comedian Rosie O’Donnell even called for a coup: “I want to send the military to the White House to get him.”

Singer/actress Barbra Streisand confessed to Trump keeping her awake at nights and actress/activist Jane Fonda saw the “parallels” to the Nazis: “If you’ve read anything about the rise of the Third Reich and Adolf Hitler, you will see the parallels. Attacking the media is the first step in the move towards fascism.”

The following are just some of the worst examples of celebrities losing their minds in the closing days before the midterms:

SICK: Ha, Ha! Look at This Veteran Who Lost An Eye Protecting Us

“So, the midterm elections are obviously a big deal....And I realized there are some pretty gross people running for office this year, so here are my first impressions. This guy is fun. Rick Scott from Florida. He looks like someone tried to whittle Bruce Willis out of a penis. Here’s a New York guy, Peter King. I actually don’t  know a lot about him, except he looks like if a cigar came to life. This guy is kind of cool, Dan Crenshaw....You may be surprised to hear he’s a congressional candidate from Texas and not a hitman in a porno movie. I’m sorry, I know he lost his eye in war or whatever.”
— Cast member Pete Davidson on Saturday Night Live, November 4.

Rosie O’Donnell: “When he was elected, what I wrote on Twitter was we should impose martial law until we make sure that the Russians weren’t involved in the final tallies of the votes....And people were like martial law, what’s wrong with you? You’re a lunatic.”
Host Nicolle Wallace: “Well, he wants to send the military to the border so – ”
O’Donnell: “I want to send the military to the White House to get him. That’s what I want to do.”
Wallace: “Gene. I’ll throw you a lifeline, my friend.”
Washington Post columnist Eugene Robinson: “Well, I don’t thing I can top that but that’s actually a pretty good idea.”
— MSNBC’s Deadline: White House, October 18.

“Here’s a guy [Washington Post columnist Jamal Khashoggi] who was tortured and killed a journalist who was speaking badly of KSM. And he [Donald Trump] doesn’t respond. Why? I’m sure that’s his wet dream to think what could he possibly do to scare journalists from not printing bad news about him, which is also equivalent to the truth about him.”
— Actress Rosie O’Donnell on MSNBC’s Deadline: White House, October 18.

Tormented At Night By Trump

“I couldn’t sleep nights. I found myself eating a lot as I tweeted about every time this president said something that wasn’t true, I just had to eat pancakes, you know, and coffee ice cream and tweet and write.. I had a lot of things on my mind. Watching the children being pulled out of their mother’s arms, it was a release to just put it down on paper, you know, then sing about it... I thought to myself how does someone who lies that much sleep at night? I mean, where is the guilt?”
— Singer/actress Barbra Streisand on ABC’s Good Morning America, November 1.

“His [Donald Trump] constant drumbeat of a loaded language that creates convenient enemies. ‘Lock her up! Enemy of the people’ These are his mantras. We cannot be surprised to wake up to bombs at the doors of his favorite targets.”
— Host Sarah Silverman discussing mail bomber as aired on Hulu’s I Love You America, October 25.

Stop Trump Before There Are Blood-Filled Streets

“This is nascent fascism. We always had a turnkey totalitarian state – all we needed was an excuse and all the institutions were in place to turn this into pure fascism. If we don’t stop [President Trump] now, we will have a revolution for real. Then there will be blood in the streets.”
— Babe actor James Cromwell in October 29 Variety article.

No Donald, You’re the Loser!

“I’m so offended by this person [Donald Trump] and by the Republicans in general and how they’ve behaved.....and when I see him I know what he is and he knows what he is. Because everything he says about other people, ‘You’re a loser, you’re a this, you’re a that’ is everything he’s saying about himself....He’s projecting. He thinks he’s on The Apprentice. And that show....tricked people to thinking he actually knows what he’s talking about.”
— Actor Robert DeNiro on ABC’s The Alec Baldwin Show, October 14.

Watch Out For Those Christian Suicide Bombers This Sunday

“The Christian right in America is no different from al-Qaeda. Print that, because someone needs to say it out loud!”
— Broadway actress Patti LuPone in October 11 interview with The Guardian.

Foy Freaks Out Over Phallic Figures

“All powerful! D.C. is where the giant penis of America lives – in more ways than one.”
— Netflix’s The Crown actress Claire Foy talking about the Washington Monument and Donald Trump in October 17 interview with The Hollywood Reporter.

You Know Who Else Attacked the Media, Right? 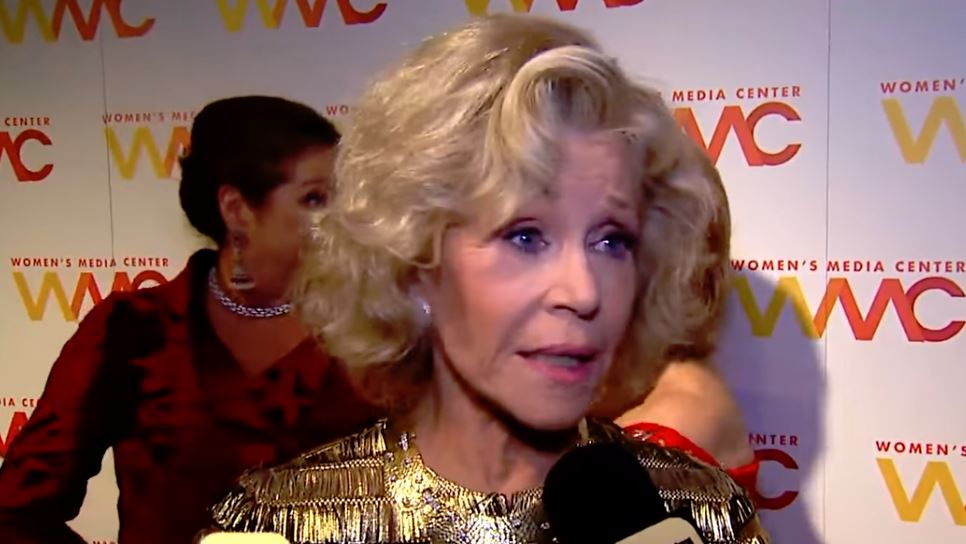 “If you’ve read anything about the rise of the Third Reich and Adolf Hitler, you will see the parallels. Attacking the media is the first step in the move towards fascism. The cornerstone to democracy is an independent, democratic media.”
— Actress Jane Fonda at Women’s Media Awards, November 1.

“‘The elections on Nov. 6 are the most important elections of my lifetime. So much depends on what happens,’ said the actress. “It’s hard for me to breathe right now....People always say, ‘Was it worse in the ’60s and ’70s?’ It was not! This is the worst! This is an existential crisis. And if we don’t do what needs to be done – in terms of making our voices heard, and our votes heard–that’s it! We don’t have time.”
— Actress Jane Fonda at film festival in Cannes as reported by The Hollywood Reporter, October 20.

“You either think he’s a dangerous menace or you are pro-dangerous menace. To me, that’s what this election is about...The President is a raving lunatic who’s like two news cycles away from humping parked cars....This is a slow- moving coup. This is the head of the federal government calling the American citizens that make up the free press the enemy of the people.”
— Host Bill Maher on HBO’s Real Time, November 2.

End “Hitler” Trump, While You Still Can

“If Trump wins he’ll cast it as a complete endorsement of his most undemocratic behavior. If you’re 18, and that happens, you stand a very real chance of not living in a western style democracy for part or all of your life. Yes – it can happen here....Take a look at this [picture on screen of crowd with Nazi salutes] This isn’t Nuremberg in 1934. It’s Madison Square Garden, in liberal New York City, in 1934. And here’s the Garden in 1939 after Hitler had already done some awful things, and yet 22,000 Americans were cheering him on. I’m not saying Trump is Hitler. Hitler volunteered for the army. But he is a want to-be dictator. And he does have a knack of getting what he wants to be. So mark Tuesday, November 6th down. Mark it in your calendar like you’re Brett Kavanaugh planning to get shitfaced. Because Tuesday is win or go home for democracy.”
— Host Bill Maher on HBO’s Real Time, November 2.