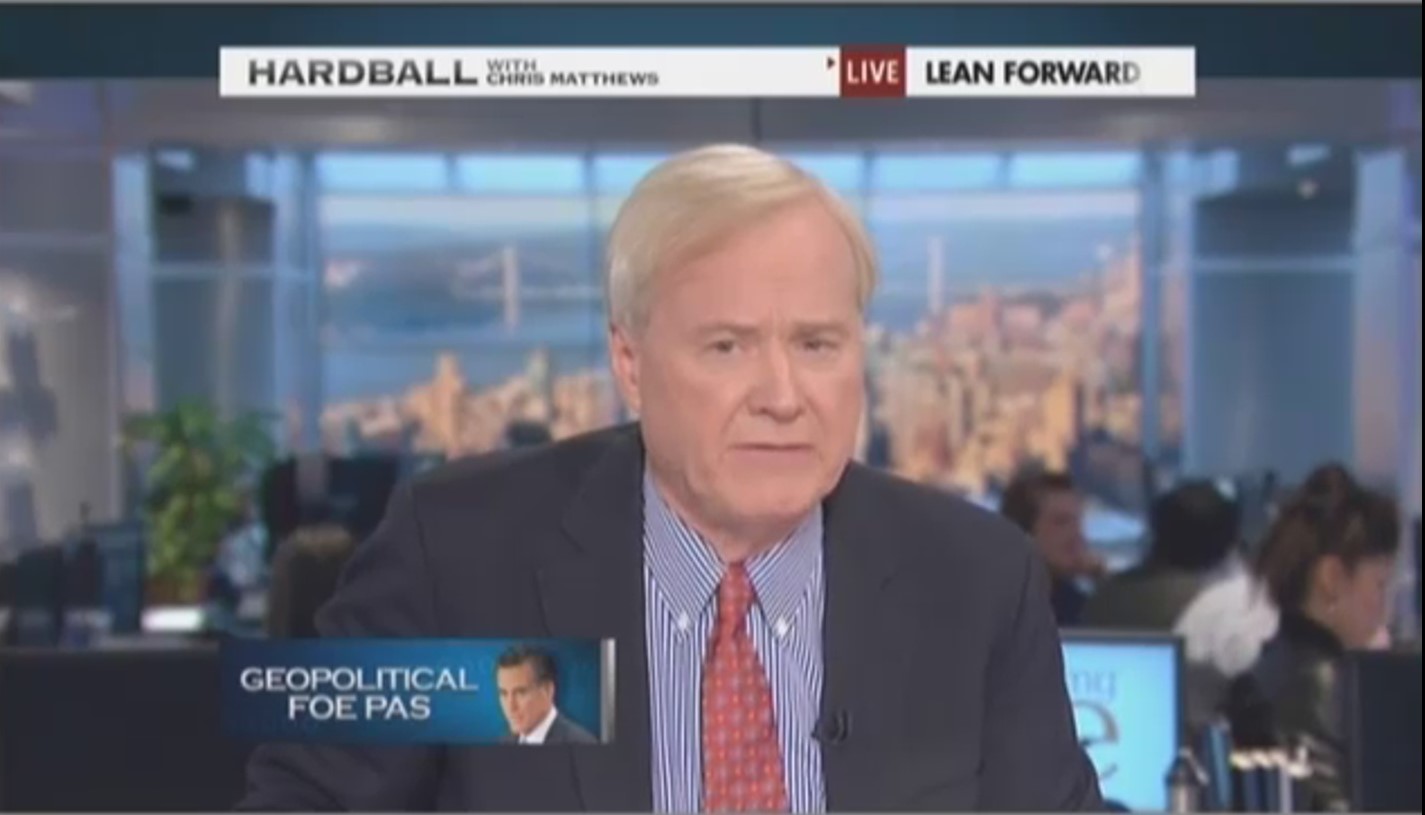 Chris Matthews joined the chorus of apocalyptic media takes on Donald Trump’s summit with Vladimir Putin, but it wasn’t that long ago he mocked Mitt Romney’s warnings about Russia back in 2012.

On Monday’s Hardball, Matthews opened the show: “Hell in Helsinki....Tonight the alarming scenes out of Helsinki are reverberating around the country and the world.” Later on in the show he asked his panel if “Is the collusion continuing?” and he pondered “I would wonder why patriotic people, and there are many – I suppose – who like Trump for all kinds of nationalistic reasons, why would they betray their own sense of growing up in this country and seeing what we faced in the Cold War and how scary it was?”

But back in 2012 he and his Hardball panelists scoffed at the notion of Russia being a threat. So what changed? Well back then Matthews and company wanted to make the GOP-presidential candidate Mitt Romney look foolish.

When Romney attacked President Barack Obama – who got caught in a hot mic moment promising then-Russian President Dmitri Medvedev he would have “more flexibility” to negotiate a missile defense deal after the November election – Matthews and his panel pounced.

On the March 27, 2012 edition of Hardball, Matthews mocked “Mitt Romney’s latest misstep, his geopolitical faux pas.” After playing a clip of Romney calling Russia “our number one geopolitical foe” Matthews derided the then-GOP presidential candidate “I don’t know what decade this guy is living....It’s not Stalin over there. It’s not Khrushchev. It’s not Brezhnev. It’s Medvedev....It’s another country in the world. It’s no longer the Soviet Union. Is he trying to play Ronald Reagan here or what?”

The following is the relevant portion of the exchange that aired back on the March 27, 2012 edition of MSNBC’s Hardball:

Host Chris Matthews: “We’ll be back with Mitt Romney’s latest misstep, his geopolitical faux pas.”...
[Clip of Mitt Romney: “If he [Obama] is planning on doing more and suggests to Russia that he has things he is willing to do with them he’s not willing to tell the American people – this is to Russia. This is, without question, our number one geopolitical foe. They fight every cause for the world’s worst actors.”]
Matthews: “Cynthia, I don’t know what decade this guy is living. It sounds like ’72, ’52 even. It’s not Stalin over there. It’s not Khrushchev. It’s not Brezhnev. It’s Medvedev.”
Cynthia Tucker, former Atlanta Journal-Constitution editor: “It’s not the Cuban missile crisis.”
Matthews: “It’s another country in the world. It’s no longer the Soviet Union. Is he trying to play Ronald Reagan here or what? What is he up to?”...
Tucker: “It made Romney look dumb. He’s not a dumb man. But he said something that was clearly dumb.”...
Matthews: “I don’t know Medvedev. We’ve got mixed views to these guys. But he seems so sophisticated and witty about his response. I mean, he just said this is an ideological cliche from decades ago. This isn’t – as he put it, it’s not the mid-1970s any more. This is the 21st century, Mr. Romney.”...
Huffington Post writer Sam Stein: “The fact that he declared Russia the preeminent geopolitical problem that the United States faced in the world is an antiquated world view, but it’s not something that’s being hidden from Romney’s policy platform....It’s a much more complicated situation than it ever has been, that Russia is a much different country than it’s been in many decades.”