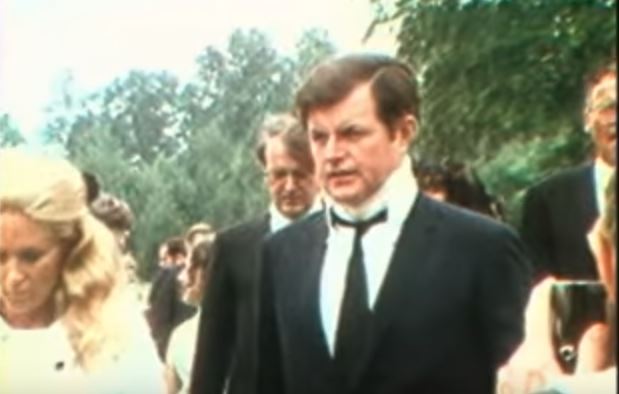 Listening to liberal journalists denounce Roy Moore, Al Franken and John Conyers, you’d think the media had zero tolerance for politicians with a known history of sexual misconduct. But the plain truth is the media have been complicit in normalizing, even justifying, such behavior for decades – if it helped protect the cause of big government liberalism.

Exhibit A: Ted Kennedy. For decades, the Massachusetts Senator and known sexual harasser was celebrated by the media, even though tales of his womanizing ways were well known by reporters who covered Capitol Hill. From his leaving Mary Jo Kopechne to drown in a car in Chappaquiddick, to his propositioning of a 16-year-old girl from his limo to the sexual assault of a Washington D.C. waitress, liberal reporters excused his misdeeds because the “Liberal Lion of the Senate” was advancing leftist legislation.

The Boston Globe’s Charles Pierce actually fantasized that if Kopechne had lived that Kennedy’s “tireless work as a legislator....would have brought comfort to her in her old age.” Time’s Lance Morrow penned this tribute: “He became one of the great lawmakers of the century, a Senate leader whose liberal mark upon American government has been prominent and permanent. The tabloid version does not do him justice.” ABC’s The View co-host Joy Behar host probably best summed up the media’s mentality when she admitted “It’s policy. Teddy Kennedy. Remember Chappaquiddick?....A girl drowns and he abandons her and she drowned, and women still voted for Teddy Kennedy. Why? Because he voted for women’s rights.”

In April, 2016 GQ reprinted an old 1990 article “Ted Kennedy on the Rocks” that recounted, in an adoring way, all of Kennedy’s womanizing. The sub-headline of the reprint read: “FROM THE GQ ARCHIVES: The once-strong voice of liberalism is now slurred, but the bibulous Kennedy boyo remains the life of the party.”

Here are just some of the lowlights, featured in the article:

In a downtown office, a former congressional page tells of her surprise meeting with Kennedy three years ago. She was 16 then. It was evening and she and her 16-year-old page, an attractive blonde, were walking down the Capitol steps on their way home from work when Kennedy’s limo pulled up and the senator opened the door. In the backseat stood a bottle of wine on ice. Leaning his graying head out the door, the senator popped the question: Would one of the girls care to join him for dinner? No. How about the other?
...

In December 1985, just before he announced he would run for president in 1988, Kennedy allegedly manhandled a pretty young woman employed as a Brasserie waitress. The woman, Carla Gaviglio, declined to be quoted in this article, but says the following account, a similar version of which first appeared in Penthouse last year, is full and accurate:
...
As Gaviglio enters the room, the six-foot-two, 225-plus-pound Kennedy grabs the five-foot-three, 103-pound waitress and throws her on the table. She lands on her back, scattering crystal, plates and cutlery and the lit candles. Several glasses and a crystal candlestick are broken. Kennedy then picks her up from the table and throws her on [fellow Democratic Senator Chris] Dodd, who is sprawled in a chair. With Gaviglio on Dodd’s lap, Kennedy jumps on top and begins rubbing his genital area against hers, supporting his weight on the arms of the chair. As he is doing this, Loh enters the room. She and Gaviglio both scream, drawing one or two dishwashers. Startled, Kennedy leaps up. He laughs. Bruised, shaken and angry over what she considered a sexual assault, Gaviglio runs from the room.

These revelations pale in comparison to the allegations against Harvey Weinstein, Matt Lauer and others who have lost their jobs due to misconduct. Yet these widely-known stories did not deter the media from celebrating Kennedy as a liberal hero who deserved re-election after re-election.

The following are the worst examples of hypocritical praise from the liberal press for Kennedy as culled from the MRC’s archives:

“If she had lived, Mary Jo Kopechne would be 62 years old. Through his tireless work as a legislator, Edward Kennedy would have brought comfort to her in her old age.”
— Charles Pierce in a January 5, 2003 Boston Globe Magazine article. Kopechne drowned while trapped in Kennedy’s submerged car off Chappaquiddick Island in July 1969, an accident Kennedy did not report for several hours.

“Mary Jo wasn’t a right-wing talking point or a negative campaign slogan....We don’t know how much Kennedy was affected by her death, or what she’d have thought about arguably being a catalyst for the most successful Senate career in history....[One wonders what] Mary Jo Kopechne would have had to say about Ted’s death, and what she’d have thought of the life and career that are being (rightfully) heralded. Who knows – maybe she’d feel it was worth it.”
— Discover magazine deputy web editor Melissa Lafsky, who formerly worked on the New York Times’s Freakonomics blog, writing at the Huffington Post, August 27, 2009. 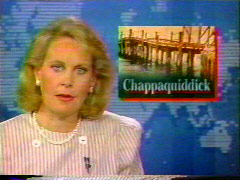 Anchor Mary Alice Williams: “It was 20 years ago tonight that a car swerved off a small bridge on Chappadquiddick Island off Massachusetts’ coast...NBC’s Andrea Mitchell tonight on how Ted Kennedy is winning respect 20 years later.”
Andrea Mitchell: “In reforming the immigration law last week, Ted Kennedy was updating the rules he first legislated in 1965. It’s that kind of nuts-and-bolts work that has earned the respect of colleagues – even conservatives.”
— NBC Nightly News, July 18, 1989.

“Yet his achievements as a Senator have towered over his time, changing the lives of far more Americans than remember the name Mary Jo Kopechne....He deserves recognition not just as the leading Senator of his time but also as one of the greats in the history of this singular institution, wise in its workings, especially its demand that a Senator be more than partisan to accomplish much.”
—  Excerpt in the August 2, 1999 Time from a then-forthcoming biography of Ted Kennedy by New York Times reporter Adam Clymer.

“People have to understand, it’s policy. Teddy Kennedy. Remember Chappaquiddick?....A girl drowns and he abandons her and she drowned, and women still voted for Teddy Kennedy. Why? Because he voted for women’s rights. That’s why. That’s the bottom line of it in my opinion.”
— ABC’s Joy Behar on The View, January 5, 2016.

“Once, long ago, he was the Prince Hal of American politics: high-spirited, youthful, heedless. He never evolved, like Prince Hal, into the ideal king. Instead he did something that was in its way just as impressive. He became one of the great lawmakers of the century, a Senate leader whose liberal mark upon American government has been prominent and permanent. The tabloid version does not do him justice. The public that knows Kennedy by his misadventures alone may vastly underrate him.”
— Time’s Lance Morrow writing about liberal Massachusetts Senator Ted Kennedy, April 29, 1991.

“He’ll be remembered as a truly Shakespearean figure: tragic, flawed; who in the end achieved redemption through greatness – both in his personal life and in his professional life, and did enormous things for millions and millions of people.”
— NPR’s Nina Totenberg on Inside Washington, August 28, 2009.

“He is the last of the liberal lions, roaring on behalf of the voiceless....The 30-year-old with nothing but a name to run on turned 70 as one of the premier legislators of the 20th century....He has championed civil rights, pushed for improved education and better health care. His name is on hundreds, probably thousands, of bills....He is an undiluted, undeterrable liberal, but a closet pragmatist. He prefers half a loaf to none, something to nothing, results over rhetoric.”
— CNN’s Candy Crowley on the February 22, 2002 edition of Inside Politics, noting the 70th birthday of Democratic Senator Ted Kennedy.

Ted “Touched” a Lot of Things

Co-host Diane Sawyer: “We are going to begin something. Can you see this going by? It’s a scroll, and it’s going to continue. We will not finish it before we take a break, because it’s Senator Kennedy’s legacy. Forty-six years of service. Three hundred bills passed....”
Reporter John Berman: “If you’re in a wheelchair, that ramp is thanks to Ted Kennedy. If you earn the minimum wage, you make more because of Ted Kennedy....If you’re a child, he worked to make sure you have health insurance....”
George Stephanopoulos: “Boy, not a corner of American life that Ted Kennedy didn’t touch....”
—  ABC’s Good Morning America, August 27, 2009.

“The lion in the Senate will be remembered for his 46 years in public office, but at his core, Senator Kennedy liked to be known as a family man....[On screen: “Family Man, Remembering Ted Kennedy”] From the tragic and very public deaths of his brothers, to the normal family triumphs and celebration, to the unexpected, Ted Kennedy didn’t forget that family came first."
— Ann Curry on NBC’s Today, August 28, 2009.

“The best reaction shots were those of Ted Kennedy, whose stature seems to grow right along with his nose year after year after year. Kennedy has now reached a grand moment in the life of a senator; he looks like Hollywood itself cast him in the role. Seriously....Kennedy looked great, like he was ready to take his place next to Jefferson on Mount Rushmore. He gives off the kind of venerable vibes that some of us got from an Everett Dirksen way back when.”
— Washington Post TV critic Tom Shales in a January 21, 2004 Style section review of the State of the Union address.