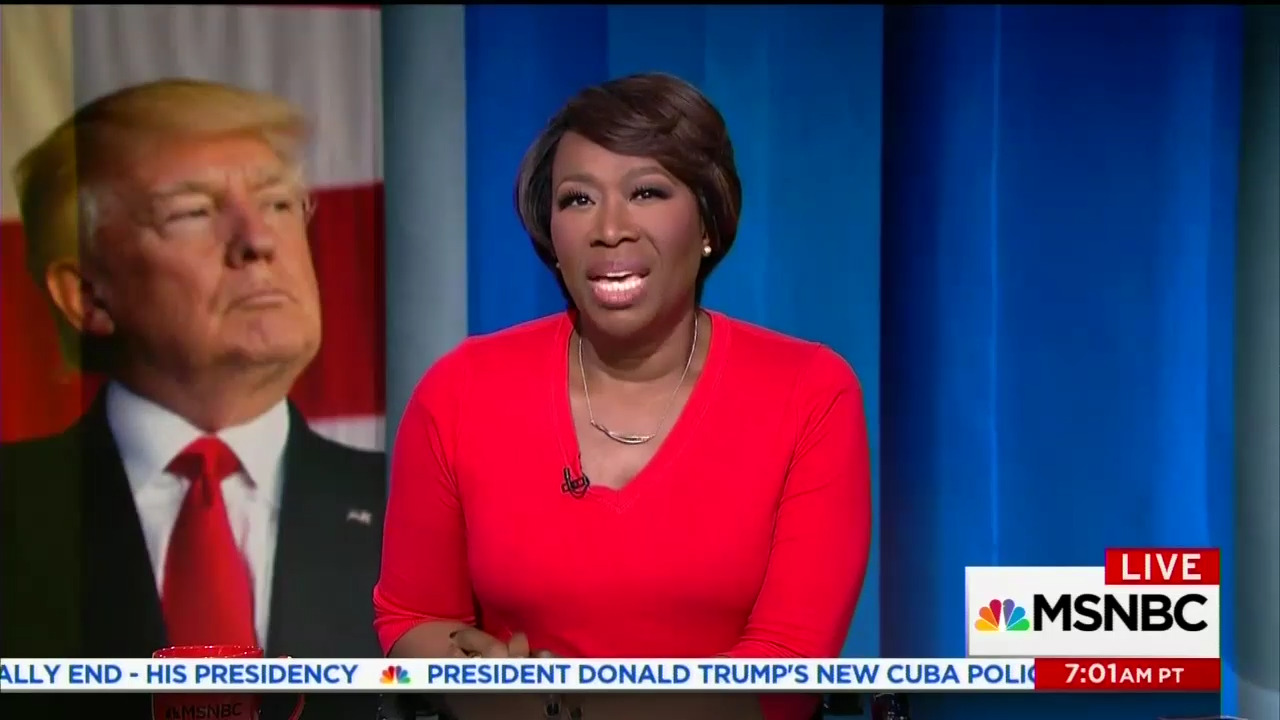 With Congressman Steve Scalise still recovering from an attack by a crazed leftist, MSNBC’s Joy Reid couldn’t keep from politicizing the tragedy as she took a cheap shot at the congressman’s record. On June 17 the host of AM Joy tweeted “Rep. #Scalise was shot by a white man with a violent background, and saved by a black lesbian police officer, and yet...”

She then accompanied the tweet with a graphic of what were, in her view, his political offenses: “Rep. Steve Scalise’s Record: Co-sponsored bill to amend Constitution, Define marriage as between a man and a woman; Voted for GOP House health bill; Co-sponsored bill to repeal ban on semiautomatic weapons.”

Later that morning, on her MSNBC show, Reid disgustingly brought up a debunked charge that Scalise attended “a white nationalist event” and continued her trashing of the Congressman’s record: “Steve Scalise has a history....we’ve all been 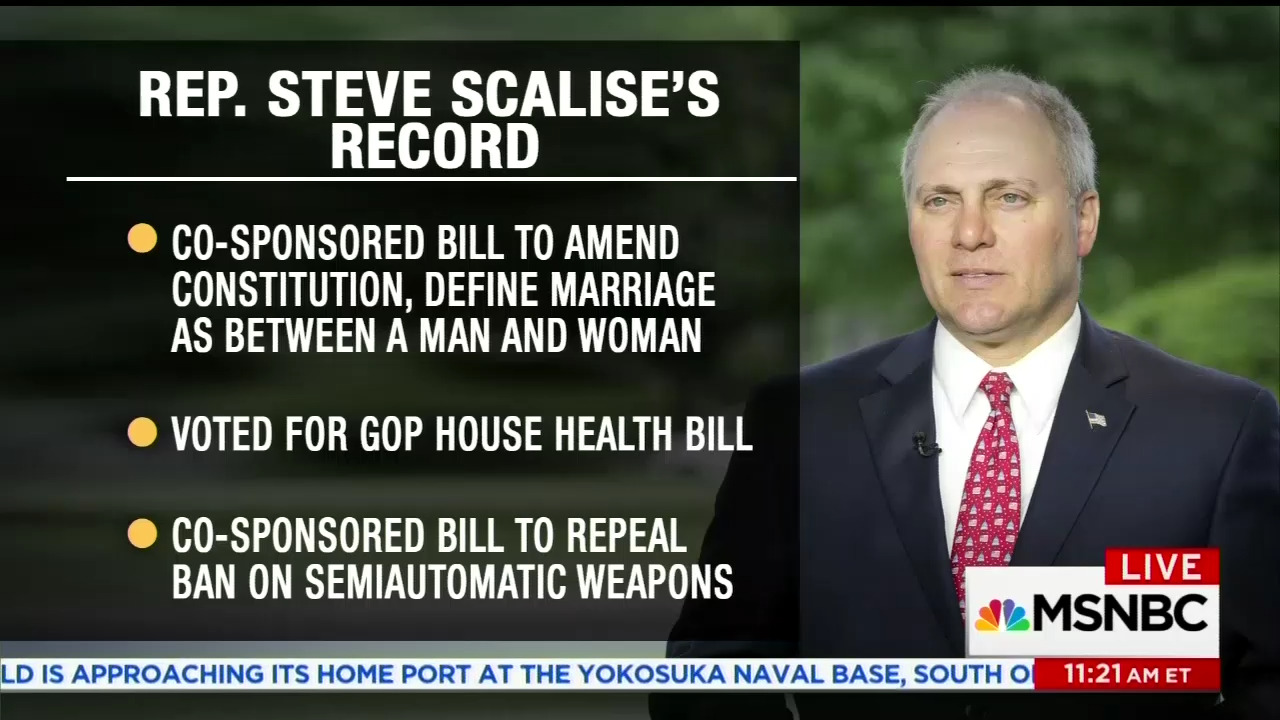 forced to sort of ignore on race. He did come to leadership after some controversy over attending a white nationalist event...He voted for the House health care bill which....would gut health care for millions of people, including three million children. And he co-sponsored a bill to repeal the ban on semi-automatic weapons.”

Sadly, Reid’s inability to put her leftist agenda aside, even while Congressman Scalise was in the hospital, is reflective of her MSNBC career. After Fox News CEO Roger Ailes passed away Reid tweeted, on May 18, that his “main legacy will be telling a generation of conservatives that their deepest fears were real, and their crudest fantasies were valid.”

During the 2016 campaign Reid attacked Donald Trump and his supporters as racists, while praising Hillary Clinton as the most qualified candidate since Thomas Jefferson and John Quincy Adams. And during the Barack Obama administration Reid condemned GOP opposition to ObamaCare as she claimed the Republican Party was “asking you to essentially kill yourself.”

Before her current stint of hosting MSNBC’s AM Joy, Reid had a long history of liberal activism. In 2004 she was Florida deputy communications director for the progressive group America Coming Together. She was a press aide in Florida for Barack Obama’s 2008 presidential campaign. From 2011-2014 she was Managing Editor of NBC News-owned TheGrio.com and an MSNBC contributor, 2011-14. And from February 2014-February 2015 she was host of MSNBC’s The Reid Report.

The following are just some of the most atrocious outbursts from Joy Reid, as culled from the MRC archives:

“Trump won in the Rust Belt in those states saying he was going to repeal and replace ObamaCare because we thought at the time that he understood that his voters hated the ‘Obama’ but they liked the ‘care.’ They didn’t see him as a guy who was going to come and cancel their Medicaid. They thought he was Daddy Warbucks. They thought that he was just going to cancel undocumented people’s Medicaid that they don't get. They just assumed that he was going to get all the brown people to stop, quote, ‘taking what’s theirs,’ but that they were going to keep their stuff.”
— Host Joy Reid on MSNBC’s Hardball, March 24.

“How awkward is it that the country that dealt with Nazism is now the country that we’re all looking to with hope that has a woman president [Germany Chancellor Angela Merkel], free college, and is being looked at as the leader of the free world while we have neo-Nazism a la Breitbart.com about to get a seat in the White House. My head hurts —  what about yours?”
— Host Joy Reid on MSNBC’s AM Joy, November 12, 2016.

“It [claims of voter fraud] is a dog whistle to people who want to believe that African Americans are cheating. The dog whistle to the far right, the Breitbart crowd...Philadelphia and Chicago. It is feeding the Breitbart people who feel that black people are stealing our elections. That’s all it is.”
— Joy Reid on MSNBC’s Hardball, October 19, 2016.

“There was a lot of really angry rhetoric, a lot of talk about murder and death and tying it all back to immigrants, tying it all back an illegal migration and there was a really hard-edged theme...If you’re a person of color, this is a weird place to be.”
— Host Joy Reid on MSNBC’s The Place for Politics 2016, July 19, 2016.

Hillary Most Qualified Candidate Since Jefferson and Adams

Correspondent Joy Reid: “If you look at Hillary Clinton’s qualifications, I mean, my God, since the Founding Fathers, has anyone tried run for president with more on their resume?”
Host Andrea Mitchell: “John Quincy Adams, maybe.”
Reid: “Maybe John Quincy Adams. True, true, true. Jefferson, Adams, I mean you have to go back literally to the 18th century to find somebody with a more packed resume than Hillary Clinton.”
— MSNBC’s Place for Politics, April 8, 2016.

Beware of the “Six Catholic Justices”

“Can the Hobby Lobby craft store chain, and Conestoga Wood Specialties of Pennsylvania claim that covering contraception in their employees’ health plans violates their rights under the Religious Freedom Restoration Act?...The Court that will decide includes six Catholic justices — some of whom have not been shy about asserting their religion.... The question is, do you trust this Court to make those decisions?”
— MSNBC host Joy Reid on The Reid Report, March 25, 2014.

“Didn’t we do this before? Wasn’t it called ‘indentured servitude,’ where you come, and you pay all this money out....you’re not a citizen, but you’re legally allowed to work on the farm? This sounds like indentured servitude, is what they want....It is also a very ugly, sort of, ethnic argument, that they don’t want to add more brown people to the population of the United States underlying this argument....This whole premise is so racially ugly.”
— MSNBC analyst Joy Reid, who is also managing editor of the NBC-owned TheGrio.com, on MSNBC’s Now with Alex Wagner, July 11, 2013 reacting to suggestions Republicans might accept legal status, but not citizenship, to illegal immigrants.

“The only thing that conservatives and Republicans are sure of is that they hate Barack Obama, that their base hates Barack Obama, and that up to now, the media has refused to see the monster that is Barack Obama.”
— Joy-Ann Reid, editor of the NBC-owned TheGrio.com, on MSNBC’s The Last Word, May 16, 2013.

GOP Asking You to Kill Yourself

“Herein lies the great irony about the conservative objection to Obamacare. What are they actually asking people to do? They're actually asking you to essentially kill yourself, because if you get sick and you don't have insurance, and you can’t be treated, you cannot survive a catastrophic illness or they’re asking you, bankrupt yourself, because if you can’t afford to pay your bill at the emergency room, they’re going to bill you anyway. And then you’re going to be pursued by credit collections people, you could lose your home. People are literally going bankrupt or they’re dying earlier because they’re not getting preventative care....This is not freedom. It’s crazy.”
— Joy Reid on MSNBC’s The Last Word with Lawrence O’Donnell, September 26, 2013.