Using Nexis transcripts and closed captioning MRC analysts did a search of the uses of the words “Nixon” “Watergate” and “massacre” on the primetime (7-11pm) cable news shows on MSNBC, CNN and Fox on May 9, and discovered those terms were used a whopping 118 times. Those terms were used to compare Trump’s actions to Nixon 107 times (91%) versus a mere 11 times (9%) those terms were used by reporters or contributors to say Comey’s firing was not comparable to what Nixon did. 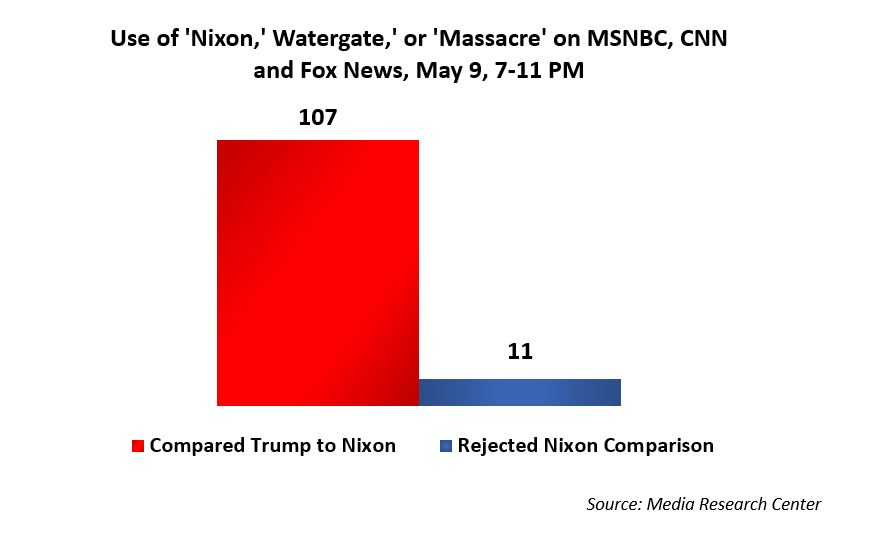 MSNBC was most zealous, using those terms 58 times were used to liken Trump to Nixon. CNN came in second with 36, while Fox News Channel finished in third with 13.

A breakdown by individual programs puts MSNBC’s The Rachel Maddow show in the lead with 44 Nixon comparisons. CNN’s Anderson Cooper 360 (which runs two hours) came in second with 19 comparisons. CNN Tonight with Don Lemon came in third with 12 times those words were used to compare Trump to Nixon. MSNBC’s Hardball and FNC’s Tucker Carlson Tonight were next with each show airing 6 comparisons. Then came CNN’s Outfront with Erin Burnett (5) followed by MSNBC’s All In with Chris Hayes, The Last Word with Lawrence O’Donnell and FNC’s The Story with Martha McCallum with each show airing 4 comparisons. FNC’s The Five (3) and Hannity (0) were in the bottom.

On Anderson Cooper 360, CNN legal analyst Jeffrey Toobin made the “dark” connection to Nixon: “This is a dark day in American history, Anderson. This is so far outside of the American political and legal tradition. For a sitting president to fire the head of the FBI who is investigating his campaign with a completely bogus and pretextual explanation for why he was fired. It’s only happened once in American history and that was October 20th, 1973, the Saturday night massacre when Richard Nixon fired Archibald Cox, the special prosecutor.” 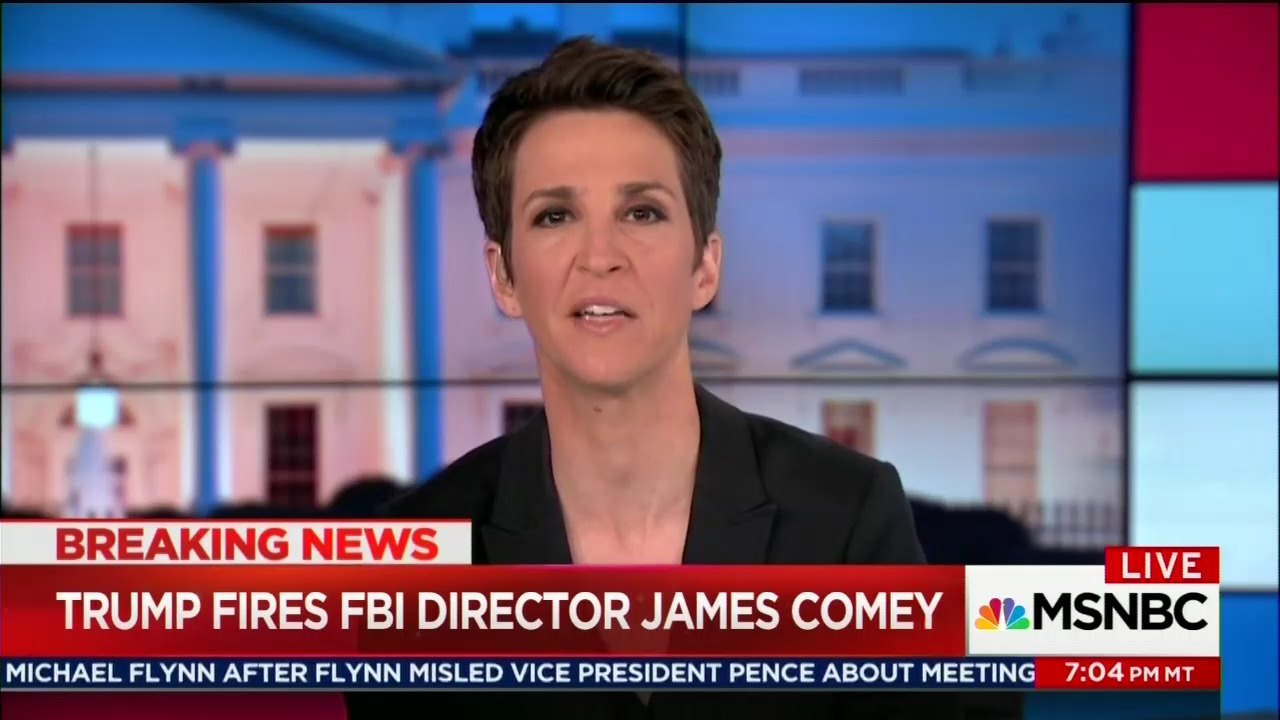 Over on MSNBC, Maddow somberly intoned: “The FBI director was fired today without warning, suddenly, summarily, effective immediately. FBI director fired today at the direction of the attorney general....The attorney general is also recused from matters related to the Trump/Russia investigation. An investigation the FBI director is now leading, or was now leading. The Nixon White House had a case to make that the Oval Office tapes shouldn’t be turned over...They lost that case. And then they tried for a while to defy the law, to fire their way and intimidate their way into getting away with it anyway. And it worked for a hot minute. But it also laid bare what they had to be afraid of. Firing Archibald Cox was the first shovel into Richard Nixon’s political grave. And it always, always works like that.”

However, not all references to Nixon put the Comey firing on the same level. Former NBC Nightly News anchor Tom Brokaw disappointed Maddow when challenged her premise: “I think that the Saturday night massacre was an entirely different dimension. We were very deep into Watergate at that point and it was a summary firing by the president of the United States who was under investigation. In this case as we’ve been hearing during the course of this day, Director Comey had a lot of self-inflicted wounds.”