Two weeks ago at the Republican National Convention (RNC) a grieving mother blasted Hillary Clinton for the debacle of the 2012 Benghazi attack. Last Thursday, at the Democratic National Convention (DNC), grieving parents gave a speech criticizing Donald Trump for his statements against Muslims.

While all the grieving parents deserve sympathy, the Big Three (ABC, CBS, NBC) network evening and morning shows seemed to only care about the parents that showed up at the Democratic Convention. Khizr Khan and his wife Ghazla’s DNC appearance earned 55 minutes, 13 seconds of Big Three network coverage, nearly 50 times more than Pat Smith, whose RNC speech honoring her son earned just 70 seconds of airtime. 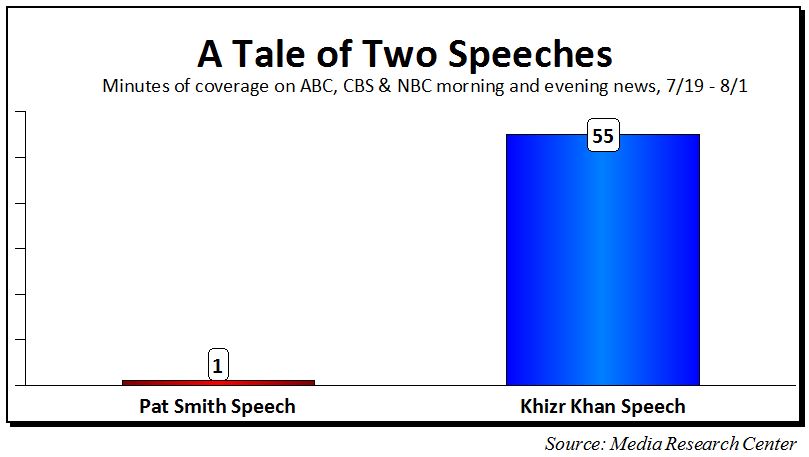 In the days (July 19 to August 1) that followed Smith’s indictment of Clinton from the RNC podium, CBS (3 seconds) ABC (13 seconds) and NBC (54 seconds) gave her speech a total of just 70 seconds of coverage.

In the four days (July 29 to August 1) following Khizr Khan and his wife Ghazala’s speech NBC (31 minutes, 39 seconds), offered the most amount of time followed by ABC (14 minutes, 21 seconds) and then CBS (9 minutes, 13 seconds).

This is a textbook case of bias-by-agenda: One of these stories (the Khan story) matched the Democratic agenda, and the partisan media couldn’t push it hard enough. The other (the Smith story) reflected poorly on the Democratic nominee, so it was barely mentioned.

While Smith’s emotional pleas were downplayed by the networks, Khan’s speech and subsequent back and forth with Trump were played up. On the July 29 edition of CBS This Morning co-anchor Norah O’Donnell noted “One of the most powerful convention moments last night came from the father of a Muslim-American soldier who was killed in Iraq in 2004. Khizir Khan criticized Donald Trump for singling out Muslims during the campaign.” Her CBS colleague Gayle King added: “That appearance by the Khans is being described as one of the most powerful of the night. People were moved to tears by the two of them standing there.”

On the August 1Today show, substitute host Tamron Hall reported “Republican presidential nominee Donald Trump campaigns in the battleground states of Ohio and Pennsylvania today, but controversy will follow him after his remarks about the parents of a Muslim-American soldier killed in Iraq.” Her colleague Andrea Mitchell added “Hillary Clinton is calling on Republicans to abandon Donald Trump, and in her words, ‘put country before party’ because of his controversial comments about Captain Khan and his family.”

Earlier in the show, co-anchor Savannah Guthrie interviewed the Khans. But so far Pat Smith, shamefully, has yet to be extended the same courtesy on any of the Big Three evening or morning shows.