Posted below: the July 18 edition of Notable Quotables, MRC’s bi-weekly compilation of the latest outrageous quotes in the liberal media. This issue: MSNBC’s GOP convention co-anchor Rachel Maddow likens presumptive Republican presidential nominee Donald Trump to Adolf Hitler, while journalists wonder if Hillary Clinton was “over-targeted” on the e-mail scandal for a crime that isn't any worse than “jaywalking.”

Plus: MSNBC’s Hardball host Chris Matthews wonders if Indiana Governor Mike Pence is too “churchy” for Trump to pick. And film director John McTieranan actually blames the “American hyper-masculnity” of Captain America for “hundreds of thousands” of deaths. The complete issue, with 24 quotes is posted below (or view the printer-friendly PDF version). 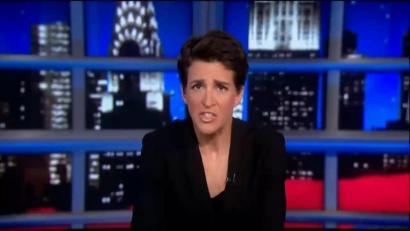 “What’s the worst-case scenario for America if he [Donald Trump] wins? It can be pretty bad. You don’t have to go back far in history to get to almost apocalyptic scenarios....Over the past year I’ve been reading a lot about what it was like when Hitler first became chancellor. I am gravitating toward moments in history for subliminal reference in terms of cultures that have unexpectedly veered into dark places, because I think that’s possibly where we are.”
— MSNBC host Rachel Maddow in a July 12 interview with Rolling Stone magazine.

Fretting Hillary “Over-Targeted” for a Crime No Worse Than “Jaywalking”

Host Chuck Todd: “If it’s Thursday, it’s a five-hour grilling for the FBI director, but did Republicans make a mistake by even holding this hearing? Did they inadvertently help Hillary Clinton?...
Todd to Rep. Jim Jordan: “Would you ever sit here and say she is being over-targeted because of who she is? Would anybody else have had a second congressional hearing?”
— NBC’s Meet the Press moderator Chuck Todd on MSNBC’s MTP Daily, July 7.

“I didn’t hear a word about pathological liar. What I heard was, no reasonable prosecutor would bring this case. There is no evidence of obstruction of justice or lying to the FBI. These would be crimes, and I think he handled this appropriately about careless use of e-mail, extremely careless use. I mean, that’s like jaywalking compared to everything Donald Trump has put out there.”
— The Daily Beast’s Eleanor Clift on the syndicated McLaughlin Group, July 10.

“The FBI’s bombshell announcement spoiling what President Obama and Hillary Clinton were hoping would be the political picture of the day: stepping off Air Force One together, after pointedly not discussing the investigation on the flight down...All of this spoiling the big Democratic rollout here in North Carolina.”
— Correspondent Andrea Mitchell on NBC Nightly News, July 5.

“Hard for Anybody” to Think That “The System Is Rigged” 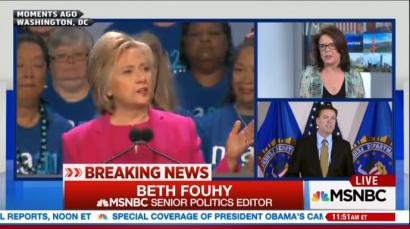 “This sort of notion that the system is rigged — hard for anybody to agree to that after you see what James Comey just did and how clearly and non-partisan he took this matter....Nobody knew he was going to speak. Nobody from the campaign, we’re told, certainly not the Department of Justice as he told us. He went through all the steps in a clear way. It’s just really hard to argue that the system is rigged.”
— NBC News senior political editor Beth Fouhy during MSNBC’s post-Comey announcement coverage, July 5.

“We have looked at implicit bias; and you look at the polling, where you see that Hillary Clinton is losing on leadership. That’s all about being a woman.”
— NPR analyst Cokie Roberts on ABC’s This Week, July 3.

Insecure and Paranoid Brits Remind Me of Americans

“It’s the mirror image of what’s going on in this country: A lot of the vote against the European Union in Great Britain — ‘we want our own country back, we don’t want all these immigrants coming here,’ that’s what we’re seeing here; and a lot of people are confused about their future with good reason, and that confusion is fed by social media because you can’t go online anywhere without someone having a very strong, sometimes outrageous opinion, about what needs to be done; and that fuels insecurity and paranoia.”
— Former NBC Nightly News anchor Tom Brokaw on CBS’s Late Show with Stephen Colbert, June 28. 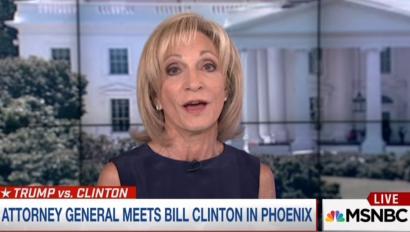 “It, is, we are told, traditional that when Bill Clinton knows that a Cabinet secretary or another [Secret Service] protectee....is in the area, he’ll say, ‘Oh, let me say hello.’...Met with her [Loretta Lynch] for about 30 minutes. She said it was completely social. They talked about grandchildren. But this has led to a lot of conspiracy theories that even before Hillary Clinton has been interviewed by the FBI, to our knowledge, that somehow this is Bill Clinton talking to Loretta Lynch about clearing Hillary Clinton of the e-mail investigation.”
— MSNBC’s Andrea Mitchell on Andrea Mitchell Reports, June 30.

“They are at the airport at the same time....Why can’t he just go over and say hello?”
— Co-host Gayle King on CBS This Morning, June 30.

“It’s almost being treated like this is a House of Cards scene. If it was going to be something that is so secretive, they wouldn’t have done it in such a public place is what some people are saying. And can we take them to their word? ‘Listen, we are talking about our grandkids and he is asking me about my husband.’ Could that possibly be true?”
— Co-host Gayle King on CBS This Morning, July 1.

“The most obvious explanation, and probably the right one, is Bill Clinton is a really social guy, right? And we’ve all seen situations where famous people on the tarmac, the two planes, it’s kind of fun. ‘Hey, let’s go over and visit.’...You know, talking about golf and grandkids for 30 minutes? That’s a long time...And the President knew this was a critical time. I’m sure he regrets it. But the suspicion will never go away.”
— MSNBC political analyst Mark Halperin on NBC’s Today, July 1.

Fawning Over the “Happy Couple” 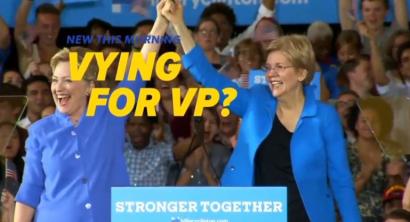 Correspondent Cecilia Vega: “ABC News has learned the Massachusetts senator [Elizabeth Warren] is among the names being formally vetted as a possible Clinton running mate. Many here excited by the prospect.”...
Co-Host George Stephanopoulos: “Clinton and Warren, they looked like a pretty happy couple today.”
— ABC’s Good Morning America, June 27.

“What a day it was. It was really electric here. Elizabeth Warren and Hillary Clinton, never close. Could this be the start of a beautiful friendship?”
— Correspondent Andrea Mitchell on NBC Nightly News, June 27.

“You watched this event, it did seem like magic on that stage....Even their colors seem to match. And blend in with each other.”
— Host Andrea Mitchell to former Obama advisor Anita Dunn on MSNBC’s Andrea Mitchell Reports, June 27.

“The bottom line is Hillary Clinton stands for the amplification of the best ideas that have motivated the American democratic experiment from the beginning and Donald Trump trumps those....I’m telling you, Donald Trump amplifies the worst instincts and his nationalism is really a white racist supremacist nationalism that wreaks terror on the American democratic experiment.”
— Author/MSNBC analyst Michael Eric Dyson on ABC’s This Week, June 26.

Most Depressing Hall of Fame Ever 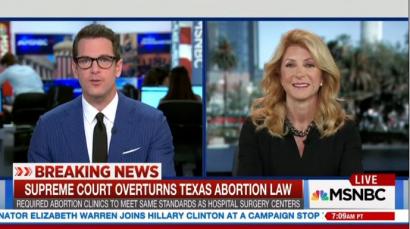 “You ran for governor, after the filibuster [against abortion clinic regulations] that....skyrocketed you because of those pink sneakers. I’m not sure if you’ve put those in any type of hall of fame in Texas, or if they’re still somewhere in your closet, but does this make you want to get back into Texas politics again?”
— Host Thomas Roberts to former Texas State Senator Wendy Davis on MSNBC Live with Thomas Roberts, June 27.

Last Time America Was Great Was When Obama Was Elected

“The fact that his [Donald Trump] campaign slogan could be, ‘Make America Great Again,’ and that pains me and people who look like me to no end. The fact that he could reference something like Operation Wetback in a debate where hundreds of our Mexican brothers and sisters were killed, slaughtered, and taken out of this country because someone didn’t allow them to be here anymore is exactly the problem. The last time America was great to me, Fareed, was in 2008 when he was elected President, and ever since then, we’ve been paying the price for that.”
— CNN political commentator Angela Rye on CNN’s Fareed Zakaria GPS, July 10.

Asking a Murderous Dictator if Trump is “Smart Enough?”

“From what you know of Mr. Trump, is he smart enough?....Do you like what you see on TV of Mr. Trump?...Mr. Trump has no experience in foreign policy. Does that worry you?”
— Correspondent Bill Neely’s questions to Syrian dictator Bashar Al-Assad as aired on MSNBC in a July 14 special NBC News: Syria’s President Speaks; An Exclusive Interview with Bashar Al-Assad. 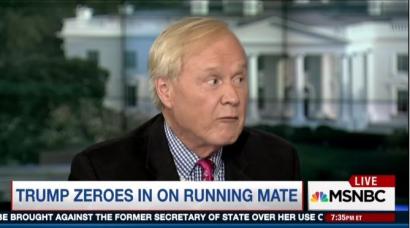 “I would never say all Republicans are racists. But if you’re a racist and you’re looking for a political party, this is the obvious choice....They just don’t like the idea of a black family eating off the White House china.”
— HBO Real Time host Bill Maher on MSNBC’s Hardball, July 13.

Spin So Lame Not Even Matthews Believes It

HBO’s Bill Maher: “Most of the people in the State Department used a private server because the government server wasn’t efficient. She [Hillary Clinton] needed a private server to get her work done....She’s a wonk who needed something that worked.”
Host Chris Matthews: “That’s pretty good. I don’t believe it, but it’s good.”
— MSNBC’s Hardball, July 13.

Captain America Responsible for the Deaths of “Hundreds of Thousands?”

“I hate most movies for political reasons, I can not really see them. I’m pissed off the minute it starts. Captain America, without laughing....The cult of American hyper-masculinity is one of the worst things that has happened in the world during the last fifty years. Hundreds of thousands of people died because of this stupid illusion. So how is it possible to watch a movie called Captain America?”
— Die Hard and Predator director John McTiernan in a July 6 interview with French magazine Premiere.