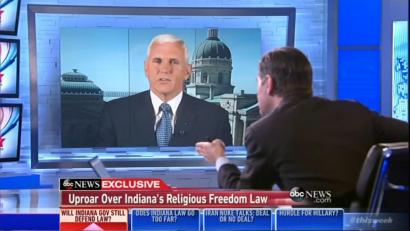 With Donald Trump’s selection of Mike Pence to be his running mate, expect the liberal media to hit the Indiana governor’s social conservatism. MSNBC host Chris Matthews has already speculated if Pence was too “churchy” to be picked by the presumptive GOP nominee.

In 2015, the liberal media hammered the Indiana governor’s defense of religious liberty issues during the debate over that state’s Religious Freedom Restoration Act. Liberal journalists depicted the act as an attack on gays with Matthews’ MSNBC colleague Mika Brzezinski trashing Pence as a hater: “People are calling him a bigot because it sounds like one and looks like one.” CNN political analyst John Avlon charged: “This puts him in the same position as George Wallace was a generation ago.”

In an appearance on ABC’s Good Morning America, after Pence stressed that the law was designed to protect private businesses from government overreach, co-anchor George Stephanopoulos depicted the law as anti-gay as he pressed: “Yes or no, if a florist in Indiana refuses to serve a gay couple at their wedding, is that legal now in Indiana?”

Back in 2009, the Indiana governor’s refusal to “denounce” the most popular conservative radio talk show host upset then MSNBC host Norah O’Donnell: “He [Rush Limbaugh] has said, ‘I hope he fails,’ talking about President Obama....he said ‘we are being told that we have to hope Obama succeeds, that we have to bend over....why don’t you feel like you could denounce something like that? Are you so beholden to someone like Rush Limbaugh that you can’t say that?”

The following are some of the liberal media’s worst attacks on Governor Mike Pence, as collected from the MRC’s archives:

“You do get a sense of the bunker mentality that’s going on right now among social conservatives....So what you get is that incredibly awkward stonewalling by [Indiana Governor] Mike Pence yesterday, where he cannot answer a simple question whether or not the state of Indiana should be able to discriminate against gays and lesbians. This puts him in the same position as George Wallace was a generation ago, by saying that — you know what? I’m not in favor of segregation. I never have been. This is about states’ rights and the Constitution. So you elevate the ugly to try to bring political purity, and it never, ever works.”
— CNN political analyst and Daily Beast editor John Avlon on CNN’s New Day, March 30, 2015.

“Well, what I find astonishing about it is the way the presidential candidates jumped onto the Pence side immediately: Jindal, Carson, Cruz, and Bush, the front-runner. It was like a premature intolerance ejaculation and, you know, there are pills for that at Walmart....”
— Newsweek national political correspondent Nina Burleigh, formerly a Time magazine reporter, on MSNBC’s The Last Word, April 1, 2015.

“The time has come for same-sex marriage or whatever you want to call  it. And it's not our, it's not our place to judge or deny business to people that we disagree with in anyway. And I'm sorry, I don't think attitudes changing over the past 20 years is really  the way to describe it. This is about human rights. Do not go there, Governor Pence. This is ridiculous. He totally stepped in it. Politically terrible. People are calling him a bigot because it sounds like one and looks like one. I'm sorry.”
— Co-host Mika Brzezinski on MSNBC’s Morning Joe, April 1, 2015.

“Indiana governor Mike Pence, 55, sparked outrage on March 26 when he signed the Religious Freedom Restoration Act into law. The legislation allows any individual or corporation to refuse service to gay, lesbian, bisexual and transgender individuals on religious beliefs. ‘Sad this new Indiana law can happen in America today,’ Hillary Clinton tweeted. Miley Cyrus, writing on Instagram, said politics is ‘the only place that has more idiots than Instagram.’”
— In the “Passages” section, under “Controversy,” in the April 13, 2015 edition of People magazine.

Put Pence and His ‘Lunatic Fringe’ In Exile

“And in what would be the biggest threat of all, the NCAA ought to tell Gov. Mike Pence and his lunatic-fringe lawmakers that it no longer feels at home in Indiana and will look at moving its headquarters from Indianapolis to a state where God-given diversity is something to be celebrated rather than feared.”
— USA Today’s Nancy Armour in March 26, 2015 column “NCAA’s moves should be out of Indiana.”

“He [Limbaugh] has said, ‘I hope he fails,’ talking about President Obama. And Rush Limbaugh also said this, he said ‘we are being told that we have to hope Obama succeeds, that we have to bend over, grab the ankles, bend over forward, backward, whichever, because his father was black, because this was the first black President.’ Do you agree with Rush Limbaugh?...On that specific thing, that, ‘we have to bend over because this is the first black President,’ why don’t you feel like you could denounce something like that? Are you so beholden to someone like Rush Limbaugh that you can’t say that?...Is that the type of rhetoric we need?”
— MSNBC’s Norah O’Donnell to Congressman Mike Pence (R-IN), on MSNBC Live, January 28, 2009.