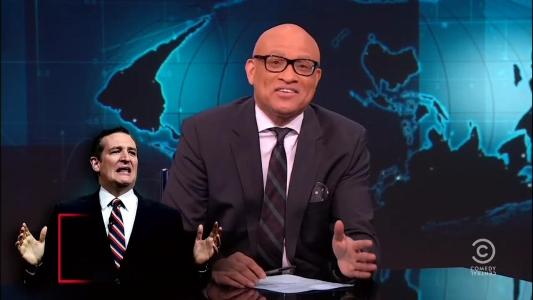 The following is a full transcript of the relevant segment as it was aired on the April 14 edition of Comedy Central’s The Nightly Show with Larry Wilmore:

But I’m sorry, you’re right. You know this comparison is totally unfair. Dildos have actually pleasured women. So. Bam! Bam! I can’t get over this! I just really can’t get over this! Here’s the thing. So a brief that Cruz wrote said “using sex toys was like hiring a willing prostitute.” Now I know what you’re thinking, “Willing prostitute? Well That’s a strange choice of words.” Well, it’s actually a legal distinction. Hold on guys. Under the law, there are “willing prostitutes,” which means they engage in sex work of their own volition, and “unwilling prostitutes,” which probably means they just got hired by Ted Cruz. That’s the distinction. That’s how you separate that.

My favorite thing about this story. I can’t believe this story! This story makes me so happy! You have to understand. Okay but this is a tweet from screenwriter and Ted Cruz’s college roommate, Craig Mazin. And he says “Ted Cruz thinks people don’t have a right to stimulate their genitals. I was his college roommate. This would be a new belief of his.” Very nice. That’s good. That’s some good writin’ there. That’s some good writin’. On the one hand, that is awesome. On the other hand, now I’m thinking about Ted Cruz masturbating. Yeah I know. I need to go throw myself in front of a bus.