Obama Brushed Back on Bullet Ban, Will Nets Report? 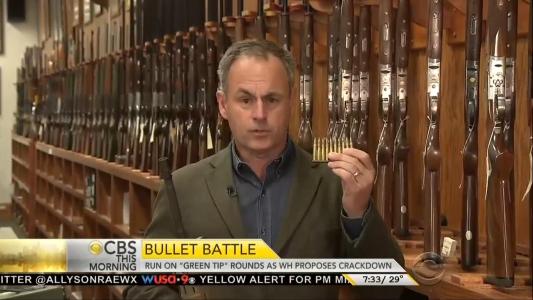 The Obama administration’s end-around attempt at gun control, through a ban on bullets used by owners of the popular AR-15 rifle, was beaten back today when the ATF announced it will hold off on a proposed ammo ban. The question is will ABC, CBS and NBC report this stinging defeat for Barack Obama and anti-gun rights advocates?

Of the Big Three (ABC, CBS, NBC) networks only CBS (in one brief and one full story totaling 3 minutes, 55 seconds) has even bothered to report about Obama’s most recent attack on 2nd Amendment rights.

On Tuesday, The Washington Examiner’s Paul Bedard reported “Under intense pressure from majorities in the House and Senate, the National Rifle Association’s huge membership, the Obama administration has abruptly changed course and is rescinding its push to ban popular and cheap ammo used by AR-15 owners.”

Bedard added: “The Bureau of Alcohol, Tobacco, Firearms and Explosives said 80,000 comments rolled in, many against the proposal to ban the 5.56 M855 ‘green tip’ ammo. The NRA and the other groups still plan to flood ATF mailboxes with opposition letters just to make sure they go through with their withdrawal.”

CBS is the only broadcast network, so far, to offer reports on the hot topic.

On the February 27 CBS This Morning co-anchor Charlie Rose, in a 17-second brief, reported: “The New York Times says there is a run on a popular bullet used in AR-15 semiautomatic rifles. The Obama administration proposed a ban on the 5.56 millimeter green tip bullets. Now gun shops say there has been a rush to snap up cases of the bullets.”

And on the March 3 CBS This Morning, Mark Strassmann offered the following 3 minute, 38 second full report on the ATF proposal:

CHARLIE ROSE: This morning gun owners around the country are buying up ammunition the Obama administration may outlaw. Regulators say the so- called green tip rounds can penetrate bulletproof vests. Critics say any potential ban is an attack on the Second Amendment. Now Congress is getting involved. Mark Strassmann is at a gun shop in Atlanta with the weapon that lies behind this controversy. Mark, good morning.

MARK STRASSMANN: Good morning. I want to show you something. This is an AR-15, the most popular centerfire rifle in America, often a symbol in the battle over gun rights. But this time the controversy is not over the weapon, it’s over the ammo--these green tip rounds and whether they represent a threat to the safety of police officers or the rights of gun owners.

Millions of target shooters and hunters in America own and love the AR-15 assault rifle. Many use these green-tipped steel and lead bullets in their semi-automatic rifles. But a recent proposal to ban the bullets by the Bureau of Alcohol, Tobacco, Firearms and Explosives has fired up gun enthusiasts.

UNIDENTIFIED MAN: And I think it’s just them trying to do little bits and pieces to get to their ultimate goal, which is to ban tactical-style rifles.

STRASSMANN: Last month the ATF said they wanted to restrict the armor- piercing rifle rounds to better protect police. The reason? Some new handguns can fire the same ammo. In their proposal the ATF said, “...with few exceptions, manufacturers will be unable to produce such armor piercing ammunition, importers unable to import such ammunition, and manufacturers and importers will be prohibited from selling or distributing the ammunition.” The move prompted Rush Limbaugh to tell his radio listeners last week that the proposed ban was a backdoor gun grab.

STRASSMANN: And around the nation gun stores have reported buying frenzies similar to that in 2013 when the President urged Congress to ban automatic weapons.

JACK LESHER: And this is the projector where cartridge that’s in great controversy at this time.

STRASSMANN: Jack Lesher is the owner of Chuck’s Firearms in Atlanta. He says some gun owners believe all AR-15 ammo will soon be banned.

LESHER: There has been a run. There’s also been a run with the major distributors in the country.

STRASSMANN: Have you seen that, too?

LESHER: When I talked to my distributors and I say well, how is it going? Their comment is, yes, we have sold out of everything.

STRASSMANN: In a statement to CBS News, the Brady Campaign to prevent gun violence said, quote,  “This is not a gun ban, it is a simple rule change to protect the lives and safety of law enforcement officers. We understand why law enforcement remains concerned about the threat of armor piercing bullets. We don`t understand why a civilian would need to walk around with a handgun chambered with military grade armor piercing ammunition.” But nearly two hundred members of Congress have asked the ATF to reconsider. Republican Congressman Doug Collins of Georgia:

REPRESENTATIVE DOUG COLLINS: This is something that has been around for thirty years. Why the perversion now? We believe it`s just a last-minute attempt by this administration to take a swap at the Second Amendment.

STRASSMANN: This ATF proposal is now at a public comments phase that goes on through the middle of this month. Gun rights advocates want to extend that phase before the proposal goes to the attorney general. As written it would allow gun owners to keep using these rounds so long as they were bought before the ban would go into effect. Gayle.