Matthews to Dem Candidate: I Hope Your Party Gets Organized and Wins This Thing!

It's no secret that Chris Matthews once flirted with the idea of running for Senate in Pennsylvania, but since he didn't throw his hat into that race, the Hardball host, on Thursday night, did everything he could to help Joe Sestak beat Republican Pat Toomey, as he urged: "I hope your party gets organized up there, because the Democratic Party of Ed Rendell and you and all those other guys ought to get together with Brady and win this thing!" And even before Matthews invited viewers to "Meet Joe Sestak" in an interview segment, the MSNBCer began cheerleading for him in a preview as he teased: "Up next, Joe Sestak from my home state of Pennsylvania, he's fighting hard, the good fight against Pat Toomey, the Club for Growther of the far right." [audio available here]

The following exchanges were aired on the September 2 edition of Hardball:

CHRIS MATTHEWS: Congressman Joe Sestak pulled off a big upset back in May when he beat Arlen Specter, he had been senator forever in Pennsylvania, in that primary. Sestak may need another upset come November. He faces a tough political climate up there. Pat Toomey, the Club for Growther of the far right is averaging a six-point gain on him right now in the latest pollsters average poll. Congressman Sestak joins right now us now. You know Pennsylvania, as you know, I'm talking to an expert, it's a purple state. It's somewhere in the middle. It's a John Wayne state. It's not a far right or far left state. How come Toomey is doing well when he's on the far right side? What is going on? Isn't he a [Rick] Santorum type?

MATTHEWS: Let me ask you about the support from the establishment up there. You beat the heck out of these people. You took the money people in big Philly. You took the machine, such as it was, on that day, it could be more interested, I think, on general election day and you beat the heck out of them. You pulled the biggest upset. Are those guys still mad at you for beating, the underdog, for beating their guy Specter?

JOE SESTAK: I'm told they're all gonna be there. A lot of them are gone for pre-Labor Day. And they're gonna be there right after Labor Day. Look, I'm not going to depend upon that. You know we raised close to $2 million in four weeks, right after the election. We're out there working every day. But more than that, I am going to help leverage those centers of excellence. I also have over 25 offices open, 25,000 phone calls a day since 1 January. We're gonna build a warfare coalition just like those 30 ships I had when I was a Navy admiral, doing the retaliatory strikes off Afghanistan, working together. But I also want you to know this Chris. I'm also focused on moderate Republicans and independents. I think when they find how extreme Congressman Toomey is, I mean if you liked Rick Santorum, you're gonna love Pat Toomey.

MATTHEWS: How is he extreme? Give me some examples! I know I asked about the steel industry a while ago and he said basically he's a free marketer, "Let it rot! Don't do anything. The government has no responsibility to save industries that are in trouble." What's your view and what's wrong with his?

SESTAK: Well let me tell you, in his book he calls it "creative destruction." It's okay that we have China subsidizing their exports because it'll have creative destruction in America where people will be unemployed, but they'll find a job somewhere else. You know zero, zero taxes for corporations where you don't have to pay for it. Look when he was in Hong Kong, working for a Hong Kong billionaire, he actually worked on those currency swaps that helped China keep down over the years those, the, the value of, of the, the wan. And so we have, as someone who believes "benefit big business, benefit Wall Street and wealth might trickle down." Look he actually believed, when he was on the Small Business committee, he slashed in half the small business budget. He voted against studies for women to find out why are they're only getting two percent of all federal contracts supposed to go to small businesses? He just voted against that. Time after time, whether its education. Here's Philadelphia, you talk about a challenge in Philadelphia? Only about 28 percent of African-American males are graduating from high school there. And Chris it's only 33 percent of whites. And so I'm on the Education committee. This is about the common good. And he helped slash the education budget by $3 billion and voted against Pell Grants. He, what he did when he was president and this is the worst, I think. When he was president of Club for Growth -- and I like Pat, I've had a beer with him -- but when he was president of Club for Growth which John McCain called "a grab bag for the ultra rich,"when he was president he actually had as his principle mission purging the Republican Party of moderates and went after Senator Lincoln Chafee and others.

SESTAK: In my mind we don't need an ideology, we need someone who is willing to work. 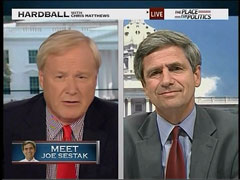 MATTHEWS: Okay let me ask you, let's talk, let's talk turkey, Admiral, Congressman. I mean you deserve both titles. You've earned them. Let me ask you this. Are you gonna get Bill Clinton in there? It seems to me that if you look at Southwestern Pennsylvania, if you look at anywhere in that state, among the African-American community, which has been hammered with unemployment. They, if they had the jobs that the Irish guys had, in the neighborhoods I grew up in today, they'd be unbelievably middle class. They'd be in such a great shape. Those jobs are gone, those steel jobs. Let me ask you. Are you gonna bring Bill Clinton in there? Because, it seems to me, he would be even better than the President, to help you in Pennsylvania?

SESTAK: Yes. Yeah he's already come in for Scranton. Great rally. Unfortunately I was down in Washington for the good business of voting for that EFNEP bill that Congressman Toomey opposed and would have had 12,000 Pennsylvanians...

MATTHEWS: Well you gonna bring him back?

SESTAK: ...if we hadn't passed it. Absolutely. Actually I was talking with them the other day and they just wanted to know what days. They tell me I'm their top priority and I'm gonna keep working on that. So, I hope to see him out there a lot.

MATTHEWS: Well I hope your party, I hope your party gets organized up there, because the Democratic Party of Ed Rendell and you and all those other guys ought to get together with Brady and win this thing! Anyway, thank you Congressman Joe Sestak, running for Pennsylvania senator.