The Dick Cheney obsessed Chris Matthews, on Wednesday's Hardball, served up a softball to liberal Democratic Congressman Ed Markey as he pondered if the former vice president could, in any way, be blamed for the BP oil spill. Matthews, who it seems can't go a week without mentioning Cheney, even though he's no longer in office, questioned Markey if the oil spill occurred because of lax oversight by Cheney-installed regulators as he asked: "To what extent is the current regulatory regime, that governs people like BP, in place because of the previous administration, which was run by Cheney, based upon the Halliburton lifestyle that he came from?" [audio available here]

The following exchange was aired on the May 5 edition of Hardball:

CHRIS MATTHEWS: In the last administration, which put in place apparently a lot of these people that are regulators, these headless nails that are in there, supposedly regulating the oil industry, had a role. They got in there because Cheney was in there with his secret task force. They met at the White House. We never found out who, in the oil industry, was involved. To what extent is the current regulatory regime, that governs people like BP, in place because of the previous administration, which was run by Cheney, based upon the Halliburton lifestyle that he came from?

REP. ED MARKEY: Well, the Clinton administration recommended, for example, that an acoustical trigger that would have made it possible to shutdown the well by remote control be installed as an essential piece of equipment. But when the Bush/Cheney administ 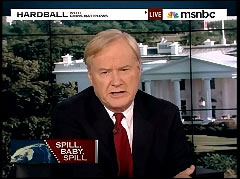 ration took over, they made a determination that it was too costly to build in that extra safety precaution. And, again, when there is an assumption that an accident cannot occur, $500,000, which is what that acoustical trigger would have cost, seems very expensive. But when 5,000 barrels of oil per day is spilling out into the Gulf destroying people's livelihoods it doesn't seem that costly at all. And so that was the ethos that existed inside the Bush/Cheney era, and I'm afraid we're now living with the consequences of those assumptions.