NBC's Matt Lauer, on Monday's Today show, confronted Maricopa County, Arizona Sheriff Joe Arpaio with a cartoon that depicted a man being arrested for buying nachos, as the Today co-anchor pressed Arpaio about that state's enforcement of illegal immigration laws: "Are you worried that it affects the image of your state?" Throughout the interview Lauer peppered the sheriff with questions about "racial profiling" and "civil rights violations" and questioned if the new policy will "distract law enforcement" and "take valuable resources away from cracking down on more serious crimes." [audio available here]

The following is a complete transcript of the segment at it was aired on the April 26 Today show:

MATT LAUER: Now to that controversial new law in Arizona that allows police to demand to see documentation from anyone they suspect to be in this country illegally. It's the toughest anti-immigration law ever. Thousands of protesters took to the streets in Phoenix on Sunday, arguing it amounts to racial profiling. And they called on President Obama to help overturn it. Joe Arpaio is the sheriff in Maricopa County, Arizona. He is known as America's toughest sheriff for his crackdowns on illegal immigration and petty crime. Sheriff Arpaio, it's good to see you. Good morning.

LAUER: Let, let me give you the results of a recent poll. 70 percent of those people asked said they are in favor of the tough new immigration bill b 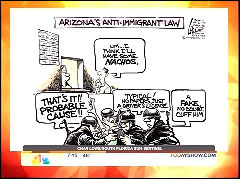 ut, get this, 53 percent of those same people said they worry that it could lead to civil rights violations. Are they worrying for nothing?

ARPAIO: Yeah. You know, 60 days into the Obama administration, he sent his Justice Department down to the Phoenix area to investigate me for alleged racial profiling. It's been a year-and-a-half and nothing has happened. So, we know how to enforce the illegal immigration laws without racial profiling.

ARPAIO: Well, first of all, that's not going to happen. I know they, pursuant to their duties. They're not gonna go on a street corner and grab people because they look like they're from another country. We haven't been doing that for the past three years, and I know law enforcement officers will not do that. That's hype. Those are the critics. Some politicians use that as an excuse because they don't like law enforcement enforcing illegal immigration laws.

LAUER: Is it going to distract law enforcement, though, and take valuable resources away from cracking down on more serious crimes? 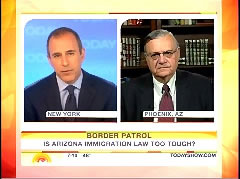 eople booked into our jails. 50 percent are misdemeanors. So that's another fallacy where law enforcement and some politicians say that's going to affect their operations, they only go after violent criminals. Law enforcement goes after everybody that violates the law, or they should.

LAUER: Critics are having a field day with this, Sheriff Arpaio, as you know. Some are calling for a business boycott of the state of Arizona. The Homeland Security Secretary, used to be the governor of Arizona, says she doesn't like this, this bill. Editorial cartoons are making fun of it. Here's one where a guy goes up to a fast food counter and orders nachos and is immediately surrounded by police for probable cause. Are you worried that it affects the image of your state?

ARPAIO: No. I think more people will move here since when we raid private businesses and arrest illegal aliens working there with the majority with phony identification, we're making more job openings by getting rid of those that are here illegally and maybe people here that are legal will be able to find a job. We do have an economic problem across our nation, including the Phoenix area.

LAUER: Maricopa County Sheriff Joe Arpaio. Sheriff Arpaio thank you for joining us this morning. I appreciate it.