Matthews: GOP Kept Their 'Crazies in the Closet' But Still Sounded Like N. Korean Commies

Chris Matthews, during a special post-health care summit two hour edition of Hardball on Thursday night, dissected the GOP strategy as one of keeping their "crazies" like Michele Bachman and Joe Wilson, "in the closet" and mocked that their "rehearsed" phrases made them sound like a "North Korean assembly" and exclaimed it was "an example of Pyongyang democracy, which is "What the Dear Leader told us to recite." [audio available here]

The following Matthews outbursts were aired during the February 25 edition of Hardball:

CHRIS MATTHEWS: The Republican strategy was "Don't show your ugly faces tonight." Today they kept all the crazies, all the crazies were in the closet. And I will go through the list without calling them necessarily crazies although I think it would apply in some cases. Michele Bachmann was not allowed to show up today. Joe Wilson from South Carolina was not there in evidence. I could go through the list. Eric Cantor was on good behavior today. John Boehner was on pretty good behavior. They weren't showing that angry, kind of truculent look they like to show when they are on C-SPAN.

CHRIS MATTHEWS AFTER PLAYING CLIPS OF REPUBLICANS REPEATING SAME PHRASES: What a flaming embarrassment! Look at these terms! "Start over," "clean sheet of paper," "scrap the bill," "step by step," repeated like robotics. Chuck first. This is an embarrassment for this party.

MATTHEWS: This is what it must be like at those North Korean assembly meetings where they all get together before the Dear Leader. 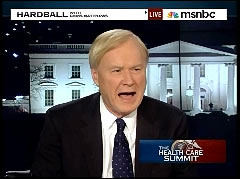 TODD: Remember the Republicans made the decision to prep.

MATTHEWS: Boy did they prep! They rehearsed!

TODD: They clearly had a rehearsed talking point. The Democrats had a strategy – that as you noted earlier – they had a wider vocabulary in saying what they were-

TODD: But clearly the Democrats went in there to say, "Hey we're not that far apart, we're in agreement." Why? Because it's these wavering conservative, moderate Democrats that they need to win over and they need to convince, "Oh it's not radical. Don't worry. Everything is going to be okay." And the Republicans are trying to send the message, "Hey we're all united here. Let's start over. But we still want to have health care. But let's start over."

MATTHEWS: There was an example of Pyongyang democracy, which is "What the Dear Leader told us to recite," and they recited it as a song.