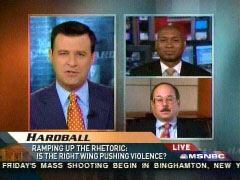 Fresh off the cancellation of his own MSNBC show an unleashed David Shuster, sub-hosting for Chris Matthews on Monday's "Hardball," ranted and railed against "crazy," "conservative" "wingnuts" like Chuck Norris, Michele Bachmann, Rush Limbaugh and Glenn Beck for fomenting, "dangerous," "red hot rhetoric," that "inspire some of the crazies out there", like accused cop killer Richard Poplowski, "to do something violent."

Shuster – who apparently wasn't liberal enough for MSNBC's tastes, that he was replaced by liberal talk radio host Ed Schultz – seemed out to show his bosses, that oh no, indeed he was liberal enough for the network's standards, and set out to prove that, right off the bat, in his "Hardball" opening monologue:

DAVID SHUSTER: Who is the real nutcase? North Korea's Kim Jong-Il or any conservative who wants to bomb him? Let's play "Hardball!" Good evening, I'm David Shuster, in tonight for Chris Matthews. Leading off tonight, nuclear war games! So what are we to make of North Korea's attempt to send a satellite into space? Even though the launch failed the North Korean rocket did travel some 2000 miles twice as far as an earlier North Korean rocket. President Obama called it "a provocative act," and wants new UN sanctions. Former House Speaker Gingrich says we should have bombed North Korea before the launch. Is Gingrich crazy to talk like that or is it dangerous to hope sanctions will do the trick?....And back for crazy talk for a moment. How in the world do you explain people like Chuck Norris calling for a second American Revolution to defeat President Obama's policies? And what about conservative Congresswoman Michele Bachmann appearing to tell her constituents to start stockpiling weapons and ammunition.

REP. MICHELE BACHMANN: I want people in Minnesota armed and dangerous on this issue of energy tax because we need to fight back.

SHUSTER: Now Bachman claims she was talking about information. In any case, folks we just had and election and guess what? Obama won! And yet the rhetoric from the wingnuts is getting crazier by the week. Speaking of right wing fury wait till you hear David Axelrod's thoughts on Dick Cheney and what the former Vice President has been saying about President Obama. And fury, pretty much describes what Sarah Palin's family feels for Levi Johnston these days. Johnston went on a national TV show to explain the level of irresponsibility that he and Bristol Palin engaged in that produced Baby Tripp, nine months later. That's coming up on the "Hardball Sideshow."

Shuster continued his diatribes throughout the show. First up, Shuster's over-the-top use of the term "wingnuts" was even too much for Newsweek's Howard Fineman:

HOWARD FINEMAN, NEWSWEEK: Well you can use the wingnut term, I'm not gonna use it.

Then, in the "Hardball Sideshow" segment Shuster went off on Sarah Palin:

SHUSTER AFTER PLAYING CLIP OF LEVI JOHNSTON ON "THE TYRA BANKS SHOW": Well Governor Sarah Palin, who apparently advocates abstinence instead of sex ed put out this statement in response to Levi, quote, "It is unfortunate that Levi finds it more appealing to exploit his previous relationships with Bristol than to contribute to the well being of the child." Um, speaking of exploitation, Governor, isn't that what you were doing with your family and Levi at the Republican Convention?

And as if he was saving the worst for last, Shuster went as far as to blame right wing talk radio for the actions of a cop killer as seen in the following exchanges from the April 6, edition of "Hardball":

SHUSTER: Up next gun sales are up, violence is back on the front page and conservatives are calling for revolution. Is the red hot rhetoric of the right helping foment something dangerous in this country? That debate over words and what they may cause is coming up next. You're watching "Hardball," only on MSNBC.

SHUSTER: New York Times columnist Charles M. Blow wanted a better sense of the mind and mood of the country, of the right, and so he immersed himself in conservative media. He wrote in Saturday's New York Times, "My read: They're Apocalyptic. They feel isolated, angry, betrayed and besieged. And some of their 'leaders,' seem to be trying to mold them into militias." There's also been talk, from some on the right, of a revolution. One of their chief concerns is gun rights. Joining us now the author of the column Charles Blow of the New York Times and Alan Gottlieb of the Second Amendment Foundation. Alan let's start with you. Do you believe that the Obama administration and, and the Feds are coming to take away everybody's guns?

[On screen headline: "Ramping Up The Rhetoric: Is The Right Wing Pushing Violence?"]

SHUSTER: Right, but that's very different from "taking everybody's guns away," which is the kind of stuff Glenn Beck and Rush Limbaugh and others have said. And, and the reason I ask this...There's no doubt that they want to get rid of the assault weapons but here's the issue. Because Richard Poplowski killed three police officers in Pittsburgh a couple of days ago because he thought President Obama was, and others, and the Feds were coming to take his guns away. And I guess my question is, Charles to you, who's responsible for that? Is it this deranged guy or how much a factor is the stuff that's out there in the right wing megaphone contributing to this, that, this thought process of these people?

CHARLES BLOW, NEW YORK TIMES: Right, I don't know what's happening in his case yet, and, and he will go to trial, we'll find out more about his case. But I think that what's happening in that echo chamber is very dangerous. Because it only takes a couple of people or one person to do something that, with a gun that, that is very irresponsible, that leads to something like this. And I feel like if you are gonna let these people ramble on, if they feel like that's a responsible way to use the platform that they have, then that's very unfortunate.

SHUSTER REFERRING TO PREVIOUSLY AIRED GLENN BECK CLIP: I think that's part of the problem of this entire debate is when the right wing echo chamber comes up with their own facts, and their own analogies and says that fascism is on the march and that FEMA is creating concentration camps you got some of these nutcases who are gonna take matters into their own hands.

SHUSTER RESPONDING TO GOTTLIEB: Right but you don't have every right to, to essentially inspire some of the crazies out there to do something violent because they think fascism is on the march.