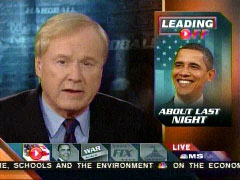 Attempting to explain last night's off-camera "Oh God!" exclamation before Bobby Jindal's response to Barack Obama, Chris Matthews, at the top of Wednesday's "Hardball," claimed he was taken aback by "The odd, antebellum look of the scene. Some people heard my reaction at the time," which contrasted with his view of Obama's address: "He wowed us! That's the running headline from last night's presidential address to the Congress. Barack Obama gave a great speech." This naked display of bias was so transparent that it caused guest panelist, former Republican Majority Leader, Tom DeLay to point out the obvious: "Listening to your introduction somebody is gonna accuse you of being biased."

The following is Matthews' entire opening monologue and then DeLay's reaction as it was aired on the February 25, edition of "Hardball":

CHRIS MATTHEWS: Good evening I'm Chris Matthews. Leading off tonight - the battle last night. It was his debut and he wowed us. That's the running headline from last night's presidential address to the Congress. Barack Obama gave a great speech filled with upbeat themes, common sense economics and a strong personal agenda on health, education and energy. If politics is strange to you and you can't really tell the difference between the two political parties you got it thrown at you last night. The Democrats are the party of Washington and strong government. The Republicans are the party that views reliance on government as embarrassing at best. The party coming into power has a leader and is proud to say so. The party that lost power did it's best to deny last night, it ever had power and put forth a spokesman who spoke as if the main perpetrator during the past eight years of budget deficits, untamed spending, Jack Abramoff and an unpopular war was not the very party he was representing. Add to that the peculiar stagecraft of the opposition party. That scene in the Louisiana Governor's Mansion. Governor Bobby Jindal walking from somewhere in the back of this narrow hall, this winding staircase looming there. The odd, antebellum look of the scene. Some people heard my reaction at the time. What was the message in all this? Was this some mimicking of a president walking along the state floor to the East Room? And at the same time did the Republicans, who are so far from Washington, they can't be blamed for anything?

[After playing clips from Obama and Jindal]

MATTHEWS: Well Mr. DeLay I liked that. It was a clear distinction between the parties. What do you think?

TOM DELAY: Listening to your introduction somebody is gonna accuse you of being biased.