Chris Matthews Charmed: Obama is 'Fred Astaire Out There!' 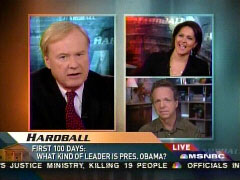 The following exchange was aired during the February 11 edition of "Hardball":

MARK MCKINNON, FORMER JOHN MCCAIN ADVISER: But I'll tell ya he's discovering one thing that President Bush did early on and that, that's this is a hard job Chris. It's a really hard job.

CHRIS MATTHEWS: Yeah but he's not saying that.

KAREN FINNEY, DNC COMMUNICATIONS DIRECTOR: He's saying, "It's the job. I know this is what I signed up for."

MATTHEWS: He doesn't look like he's having a hard time.

MCKINNON: Yeah. Well he is. In fact I think he's being very candid about it.

MATTHEWS: Yeah, he's Fred Astaire out there. He is light-hearted, I mean he's light, he still moves around with incredible alacrity.