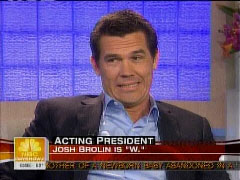 The "Today" show has yet to promote the conservative satire An American Carol, that spoofs Michael Moore but they did find time to invite on Josh Brolin to plug Oliver Stone’s George W. Bush biopic W. on Tuesday's show. Co-anchor Matt Lauer interviewed Brolin, who plays the title character, and noted critics were expecting "a political hatchet job" of the President, to which Brolin, defended Stone as he claimed the controversy surrounding the director of such factually murky films like JFK and Nixon, was "hogwash."

However Brolin admitted that one of the reasons Stone tabbed him to play Dubya was because there was something sort of "mean" about the actor. And in describing how he perfected his Bush impression Brolin observed there was an "apish quality," about the 43rd president.

The following is the full segment as it occurred on the October 14, "Today" show:

MATT LAUER: Oliver Stone is famous for directing some of Hollywood's most controversial films, especially those centered around U.S. presidents. The 1991 film JFK and 1995's Nixon both caused a response beyond your typical Hollywood buzz. Now with a cast led by Josh Brolin as George W. Bush, Stone is at it again, tackling the nation's 43rd president in a new film that is called W.

JOSH BROLIN AS GEORGE W. BUSH: I'm sure historians will say, gosh, you know I wish he could have done better on this way or that way. You know I hope, I don't want to sound like I haven't made no mistakes. You know I'm confident I have. It's just I haven't, you know, really put me on the spot here John. Maybe I'm not as quick on my feet as I should be in coming up with one.

BROLIN: It's very strange to watch.

LAUER: Is it really?

LAUER: When word got out that he was doing this, this movie about George W. Bush you could almost hear the, the critics jumping for their laptops.

LAUER: They're, they were ready to write, "This is gonna be a political hatchet job." What were you expecting when you saw the script? What did you talk to Oliver about?

BROLIN: You know Oliver approached me before, long before I saw the script and he had seen me in the Valley of Eli, I knew him socially through Paul Haggis and he came to me and he said, "Hey listen, you know I got this movie." There was a movie that he was supposed to do before that Bruce Willis pulled out of, so the whole movie kind of went, you know, it went away. And he brought W. up and he had been researching W. for a year with Stanley Weiser and he came up to me and he said, "Hey listen I think you'd be great playing this character." And I said well why, why? And he said, "I don't know there's something very bucolic, Americana and sort of mean about you." And I said, what do you mean, "mean about me?" 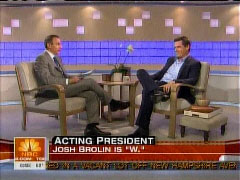 LAUER: Well did you get the idea that this was going to be a mean-spirited look at George W. Bush?

BROLIN: Well I did, initially, I had that thought. And you know, Oliver, I didn't know well enough to know, you know, to know the controversy surrounding Oliver is really just a lot of hogwash. And he's an incredibly sensitive guy who loves, you know, is obsessed with the way people tick and so finally when I read it, I thought it was incredible.

LAUER: The New York Times wrote recently, quote, "The straightforwardness of W. suggests that Mr. Stone set out to make a critical biography but was somehow spooked."

LAUER: Is, is that a fair assessment?

BROLIN: I don't if he's, I don't think so. I mean I don't think he was spooked. I think, you know, if you look at Nixon, Nixon was a fair account of, of the president. I don't think he's as controversial as everybody thinks. I think it's obvious that he loves politics. He loves people that revolve themselves around politics but I think with Bush, when we take him from 21-years-old to 58-years-old I mean it's truly a biopic. And for me it was one of the great challenges of an actor.

LAUER: Well, well take me through that. How did you go about that? You got a sitting president, clearly you've got a lot of footage to look at.

LAUER: You can turn on the TV just about everyday.

BROLIN: Well I mean the fact that we follow him early on, we don't have as much footage, we don't have as much written about him as, as a youngster. So you know you have to do your own rendition of that song. And then older, you know, for me it was nerve-wracking. Finally when we got to the scene where we do the present Bush and you start doing all the gestures and, that we all know so well. And the breathiness in the voice, which I always took to be the stress in his life or the weight of the presidency. You know it, it was a little ridiculous when we first did it.

LAUER: Did you annoy your family and friends as you-

LAUER: -with your, you know?

BROLIN: No, no, no. I went around for three months completely scared out of my mind. I'm trying on the voice, doing this hand thing that I thought, this apish quality that I thought was, you know, paralleled him. And now you see the finished product and hopefully people will like it.

LAUER: Got some really strong reviews that-

LAUER: -we'll, we'll make sure people are aware of.

LAUER: But Josh it's great to see you.

BROLIN: Yeah great to see you too.

LAUER: The movie is called W. it's pleasure.

BROLIN: I will, for sure.