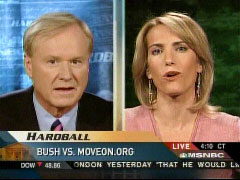 Sticking and moving like a prize fighter, talk show host and author Laura Ingraham, outnumbered in a three against one fight, took out not only "Hardball" host Chris Matthews but his colleague David Shuster and NBC News political director Chuck Todd, as well.

On Thursday night's "Hardball" Ingraham took Matthews to task for his outrageous claims about the Iraq war being about oil as she threw his past bias in his face: "What? What? Chris are, were you the one, the other night, correct me if I'm wrong, who said that we should hang Exxon and Mobil signs at, at Arlington National Cemetery?" Then Ingraham slapped down Matthews about his pessimistic view on the war: "Chris, I'm different from [where] you are on this. I actually have hope that goodness will prevail."

However, Ingraham didn’t pull any punches when it came to Shuster or Todd. The Power to the People author not only called Todd out on his "conventional wisdom" about the GOP presidential candidates but after a typically slanted report from Shuster, Ingraham sarcastically noted: "First of all let me say my life is not complete without a David Shuster report on President Bush because those reports are always completely unbiased and completely just objective...So I love those. I love those."

The following is a blow-by-blow account of the exchanges as they occurred on the September 20 edition of MSNBC's "Hardball":

Chris Matthews: "Laura, did the President find the sweet spot today by going after Moveon.org, in other words, this war is hard to sell but is it easier for him to trash Moveon.org in its ad making fun of Petraeus?"

Laura Ingraham: "First of all let me say my life is not complete without a David Shuster report on President Bush because those reports are always completely unbiased and completely just objective."

Matthews: "As, as you are yourself Laura-"

Chuck Todd, NBC News political director, talking about the anti-David Petraeus Moveon.org ad: "What's been interesting, though, with this is that all the Republican presidentials jumped on this and used this as a way of ducking of having to actually deal with the policy debate last week."

Ingraham: "Well I think they did deal with the policy debate. You, you guys-"

Todd: "I think what's amazing. Well they didn't, but you had-"

Ingraham: "That's, that's the conventional wisdom in Washington Chuck. That is ridiculous."

Ingraham: "The Republicans have been talking about the surge."

Ingraham: "They've been talking about what's working and not working frankly in Iraq and, and the fact that Moveon.org stepped in it, once again, and made fools of themselves in front of the national media and for the public at large, which condemns what they do, give me a break."

Matthews: "Okay Laura you made my point. It's easier to trash the Moveon.org than it is to defend this war, right?"

Ingraham: "What? What? Chris are, were you the one, the other night, correct me if I'm wrong, who said that we should hang Exxon and Mobil signs at, at Arlington National Cemetery?"

Ingraham: "Did you say that?"

Matthews: "-I think we should start reminding everybody that if this war is about oil, as Alan Greenspan pointed out the other day-"

Matthews: "-and many people, other people have. If it is about oil why are the oil companies making such huge windfall profits at the cost of what we're putting into this war. Yes, that's a legitimate charge."

Ingraham: "Well first of all Alan Greenspan, Alan Greenspan has, Alan Greenspan, as you know Chris, has stepped away from the way that book was marketed and he said the Bush administration, he doesn't believe they thought the war was about oil. He's making a comment about reality."

Matthews: "Well let me tell ya, I went back and read the book on the air and I will do it again. The book stands for itself. He is trying to cozy up with his former allies and colleagues but clearly Alan Greenspan spent years writing this book. He wrote what he believes. He said the war was obviously about oil."

Ingraham: "Take it from someone who's out there selling a book. I mean the way press material sometimes written doesn't always necessarily reflect what the real sentiment is of the book."

Ingraham: "Yeah I did read it Chris! He did not say that the Bush administration got into the war on Iraq because of oil and if you think he did then go to the times he's been interviewed where he doesn't say that."

Ingraham: "Thank you. Please do."

Matthews: "No you don't have to thank me because we read it and we will, Laura, we read the book verbatim here and we'll do it again."

Matthews: "You know it's hard to do it after you make it into an order, Laura."

Ingraham on Iraq: "Chris, I'm different from [where] you are on this. I actually have hope that goodness will prevail."

Ingraham: "When America, when America, maybe gets a little more united behind the idea that we're trying to do

Matthews: "No when will it, objectively, look like this was the smart move for America?"

Ingraham: "-we're trying to do something very liberal in Iraq."

Matthews: "When will it look like the smart move?"

Ingraham: "Chris we know where you are on this, you think it's a disaster and it's never gonna get better. Okay? We know that's where you are and I, and I respect that, that's what you think."

Matthews: "Let me, let me read you the quote, by the way, let me read the Alan Greenspan quote from this book."

Matthews: "‘I am saddened that it is politically inconvenient to acknowledge what everyone knows, the Iraq war is largely about oil.'"

Ingraham: "Did he say that George Bush believed when he went in the war was about oil?"

Ingraham: "Is, he, he has since commented that he doesn't believe

the administration went into Iraq for oil, as many times on this show, I believe, different people have implicated."

Matthews: "What does it mean-"

Ingraham: "That's no the case."

Matthews: "But what does it, what does it mean to say the Iraq war was largely about oil? What could that mean?"

Ingraham: "Alan Greenspan is not a national security expert last time I checked-"

Matthews: "-that's a critique but it's not a denial. Laura, you're always welcome but it was the quote, directly from Al."

Matthews: "Laura, you know it's hard to face the truth."