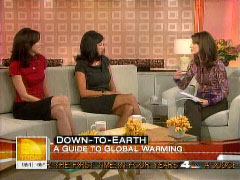 Environmental activist and An Inconvenient Truth producer Laurie David received a very warm welcome, from the green-friendly anchors on the Wednesday "Today" show, when she came on to promote her children's book, A Down-To-Earth Guide to Global Warming. During David's interview NBC's Natalie Morales noted that the book's publisher, Scholastic, was trying to place the book into schools everywhere and proclaimed: "We hope to see it there." Morales even bragged that her own son was already being indoctrinated: "They're already talking and learning about this in school. I mean, my own son already knows, 'Reduce, Reuse, Recycle.' You know the three 'R's."

No slouch herself, when it comes to preaching about global warming, Morales' colleague Ann Curry also proudly showed off her own son's concern about climate change in the following tease for the segment:

Natalie Morales: "And then explaining global warming to your kids and why it's so important. We have Laurie David, who helped produce An Inconvenient Truth. She's gonna be here to talk about that."

Ann Curry: "We were watching Nightly News last night, my son and I watched Anne Thompson's piece about global warming and he's just, was just riveted, I mean, by this picture of the, of the melting Greenland. So I think we should be talking to our kids about that."

A little later "Today" weatherman Al Roker chimed in with the following tease:

Al Roker: "Coming up next how to explain to your kids why going green is so important but first, this is Today on NBC."

The following is the full interview with Laurie David and her co-author Cambria Gordon as it took place in the 9:30am half-hour on the September 19 "Today" show:

Natalie Morales: "Earlier this year former Vice President Al Gore took home an Oscar for his documentary, An Inconvenient Truth, a film which tried to educate people about climate control and specifically the effects of global warming. Well Laurie David was a producer on that film and now with co-author Cambria Gordon, they have written a book for children, it's called The Down-to-Earth Guide to Global Warming. Ladies, good morning, nice to have you here."

Laurie David: "Thanks for having us."

Morales: "Well this is a really interesting read. A great, colorful book. What age group is this geared toward?"

David: "Well it's geared for kids 8 to 16, but I say kids of all ages because you really, you can just flip through this book and you're gonna learn something. And our goal is that kids will read it with their parents and everyone will be, get educated on this issue."

Morales: "And why are you going to, why are you targeting kids now, I mean, following up on An Inconvenient Truth?"

David: "Well, you know what, studies are showing that kids are, are showing, growing anxiety about global warming. They're hearing about it in school, they're seeing it in the extreme weather around the country. They're concerned about the demise of, of their own childhood icon, the polar bear and they're losing sleep over it. So, you know Cammy and I, goal was to bring them the truth about the information and also empower them to do something because there's so much that kids can do to help stop global warming."

Morales: "Now I have to ask you because so many people in Hollywood are taking up this issue and, of course, there is that perception, you live a certain lifestyle of luxury but yet you also have to live by example, practice what you preach. Is there a lot of pressure, Laurie, to, to make sure that, that message is out there, at the same time, while modifying your own lifestyle?"

David: "I think the pressure is on everyone. I mean it's really difficult to live in this day and age and this culture that we live in and do the right thing. I mean, we haven't, we haven't been focusing on it. We haven't been conserving, that hasn't become, that hasn't been like one of our big values and it should be, so I think it's difficult for everyone. We're all guilty, we're all part of this problem. We're all causing global warming pollution so we all have to be part of the solution."

Morales: "And Cambria you said kids are interested. They're already talking and learning about this in school. I mean, my own son already knows, 'Reduce, Reuse, Recycle.' You know the three 'R's. Why is there such an awareness at such a young age already?"

Gordon: "You know I think kids are hearing parents talk. They're seeing it on the news, they're frightened. And this book takes their fear away. What we're doing is we're empowering them. It's a hopeful book, we're giving them action to take and I think they've been begging for this. I've been hearing from kids all over the country, finally there's a book directed to them."

Morales: "And you do this, in a way that's actually, as I mentioned, it's colorful, it's, it's fun to read. There are some interesting facts and tidbits. Was it hard to sort of, make it, more approachable to a younger generation?"

Gordon: "You know that was by design. Laurie and I tried very, very hard to keep, to keep it not too wonky and fun. And one of my favorite parts is the section on deforestation."

Morales, holding up opened book: "Have that right here."

Gordon: "We wanted to communicate the science in a way that the kids could relate to. So we made an analogy. Deforestation is when we, we clear-cut our forests, we are taking the trees down. We are, in effect, making our forest bald. So we put a picture of the actor Will Ferrell."

Morales, pointing to the book: "And Will Ferrell."

Gordon: "And we say, 'What if Will Ferrell was deforested?' So the kid smiles but the child also realizes, 'Wow this is a serious problem.'"

David: "And, by the way, Will Ferrell said it was okay to use his image, so-"

Gordon: "Absolutely. He gave us permission."

Morales: "Okay? It was okay, I was gonna say, might want to check with him first. So you make it entertaining, you make it relatable and, and you say the important message here, though, is that kids also go home with this and maybe influence the actions of their parents as well, Laurie?"

David: "Exactly. Think about this. There are 74 million kids in America, under the age of 18. Can you imagine if they all took this up? You know, I'm a mom. I have two kids. I know the power of my kids when they start nagging about something and they want something done, believe me they get it done. And I think our kids are gonna become part of this movement to stop global warming and we hope this book will help them do it."

Morales: "And you're both moms. And as, and as part of that responsibility you feel it's important to make your kids equally responsible, make them aware but also to spread the message too."

David: "Absolutely! And there's so much that they can do. So even in their own life they have a carbon footprint too. Kids are a part of this problem. So they have to become part of the solution."

Gordon: "We're hoping that kids actually nag their teachers, their principals. There's so much that can be done on the school level and at the home level."

Morales: "Right. Well this book is by, the way, you say Scholastic is helping with, put it into schools so we hope to see it there. Thank you so much. The book is The Down-to-Earth Guide to Global Warming. Laurie David and Cambria Gordon. Nice to have you both here. Thank you."