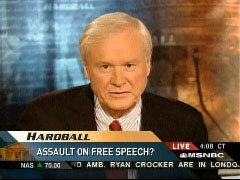 Upset that a University of Florida student was tasered by campus police at a John Kerry event, MSNBC's Chris Matthews, on Tuesday's, "Hardball" feared it was a result of the "fascistic notion" of American troops "forcing" democracy on Iraqis at "gunpoint", filtering back home.

Chris Matthews: "You know when we walk into those, every night on television you watch pictures of American soldiers risking their lives to break into homes in Baghdad, at gunpoint, telling people to go along with the government that we've set up over there. Democracy at gunpoint. I wonder if it's filtered back here at home. I wonder if it's drift back home? The idea that democracy is something you do at gunpoint. ‘Either you behave and do it this way and show up by putting your fingers in the ink and doing it this way or you're an insurgent, therefore, we can round you up and if you resist we can kill you.' That notion it's a bit fascist and it's certainly a fascistic notion of democracy we're forcing, forcing on people over there. They didn't invited us into Iraq and I wonder now whether we are picking up some of the bad habits of the war front?"

Video and additional transcript below the fold.

Here's the vid courtesy of Stop the ACLU:

A little earlier in the September 18 "Hardball" segment, that featured leftists Joe Conason of the New York Observer and Madea Benjamin of anti-war protest group Code Pink, Matthews was dismayed that Republican supporters of President Bush didn't engage in obnoxious, rude and disruptive behavior, as he compared them to "Stepford Wives."

Matthews: "Let me ask you, Joe, about you've been covering this campaign, I'm in the studio here. It's a great job but I don't get out of here much. When you get out there and cover these presidential stops? Is it, does it feel like, like Truman-ville or something? Like, I look at the faces of the people who are watching the President. They have this passivity of, I shouldn't be cruel, but are they, are they Stepford wives and golfing Republicans? Who are these people that just sort of sits there, 'Oh that's interesting the war is gonna end positively, everything is going well and our troops are doing the job' and everything is so calm and collected, I don't get who these people are."