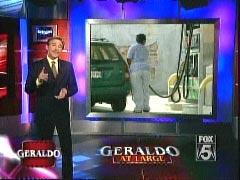 Fox News' Geraldo Rivera did his part to feed the gas price election conspiracy theory on last night's Geraldo At Large. Rivera pondered about the lower prices, "Is it gas pump pimping?" and "Doesn't it make you even a little suspicious that the cost to fill ‘er up dropped almost a dollar a gallon and the elections are just two weeks away?" Rivera asked those questions and then proceeded to tick down several nutty theories during his final commentary on his October 25th show. Now the commentary wasn't completely without skepticism but it wasn't enough to keep his end of show rant from sounding utterly ridiculous.

From the opening and throughout the show Rivera tantalized the conspiracy nuts in his audience with the following teases:

Geraldo Rivera: "Then gas prices plunge in the days before election, voters wonder, coincidence or a conspiracy?"

Rivera: "Still ahead, so gas prices are down, way down but before you run out to buy a new Hummer ponder this. Doesn't it make you even a little suspicious that the cost to fill ‘er up dropped almost a dollar a gallon and the elections are just two weeks away? That's coming up."

Rivera: "Stand by everybody we'll be back in a flash with election year prices, is it gas pump pimping?"

Finally Rivera unleashed this commentary before the close of the show:

Rivera: "Do you remember how painful it was to fill up your car last summer? Not even three months ago during the first week of August the gallon regular unleaded gas? Three bucks. That pain at the pump froze the sale of SUVs, Hummers began looking like dinosaurs and a lot of people began rethinking their opposition to drilling for oil offshore or up in the Alaskan wilderness. Back in August even the gas jokes hurt."

Jimmy Kimmel: "A lot of people wonder how the prices can fluctuate so wildly?"

Rivera: "$3.00 a gallon in August and even more out on the coast and many Americans listed high fuel prices as their top concern even more than terrorism. But do you know what gas averages today? $2.19! So what made gas prices fall off the cliff? Back in September a Gallup poll found that 42 percent of the people agreed with the statement that the Bush administration deliberately manipulated the price of gasoline so that it would decrease before this fall's elections. So is there a conspiracy to artificially lower gas prices and get Republicans re-elected in November? Let's examine the allegations. Item: the Saudi Royal family is doing their buddy the President a big one and taking a price cut until the elections are over. Maybe? Bob Woodward's Plan of Attack does claim the Saudis promised in 2004 to keep oil production high enough to take pressure off prices during that presidential election year but on the other hand not even the Saudis have the spit to really control world oil supply any more. So item: Treasury Secretary Henry Paulison got his former partners at the financial giant Goldman Sachs to dump gasoline futures to drive down the price at the pump and help Republicans get elected. Well Goldman Sachs did dump its position in gas futures recently but they said they did it to invest instead in gasoline blended with ethanol, the new favorite of government regulators. How about item: Big Oil companies want to help former oil men George Bush and Dick Cheney keep a Republican majority in Congress. Well according to Public Citizen, that's a left-leaning advocacy group quoted in the Washington Post, 81 percent of the $63 million that Big Oil donated to politicians did go to Republicans, 81 percent. But would they really hurt their short-term profits to reap long-term political advantage? We report, you decide."

Jay Leno: "The good news, oil has fallen to $60 a barrel. Experts predict it will continue to fall until exactly one minute after the polls close on November 7th.."

Rivera: "In fairness there were no hurricanes this season that really disrupted supply, so that's probably a factor too. That's it for us, until next time thanks for watching."