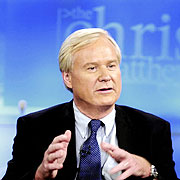 On yesterday’s syndicated The Chris Matthews Show, Matthews worried Cheney might start a war over his "crowd pleaser" comments because Iran’s nuclear ambitions are now "a matter of national pride for Iranians." Howard Fineman for his part is taking Al Gore seriously again and claimed a new movie featuring Gore is going to turn him "into a cult figure." During the show’s prediction segment where Matthews asks the panel to "tell me something I don’t know," Fineman gave offered this scoop:

Howard Fineman: "Chris you know how Scott Fitzgerald said there are no second acts in American lives? Well there are in politics and two of the big names you're gonna be hearing in the ‘08 cycle for president Newt Gingrich and Al Gore. Mark my word the movie about Al Gore and his crusade on global warming is gonna turn him not into, only into a cult figure on the campaign trail but a real candidate."

Matthews: "We'll save this tape."

To his credit Matthews guffawed a bit at Fineman’s prediction but in the following segment Matthews tried to sell the idea that Cheney’s "crowd pleaser" comments on Iran were dangerous. The following is Matthews’ final commentary:

Matthews: "Politics can be ugly, terrorism is always ugly. Put the two together, politics and terrorism and it doesn't get much worse. We've gotten used to Republicans using terrorism to beat Democrats. Max Cleland, a triple amputee war vet was whacked from his Senate seat for wanting to allow workers at the Homeland Security department to join federal employee unions. Karl Rove has scored the entire Democratic Party for being blind to the dangers since 9/11. But no good political tactic goes un-stolen. Born on the wings of radio talk shows Democrats and Republicans alike spent weeks lambasting President Bush for giving away our ports to the Arabs. You ain't seen nothing yet. This week Vice President Dick Cheney presented a politically friendly group with this crowd pleaser."

[Dick Cheney: "The Iranian regime needs to know that if it stays on its present course the international community is prepared to impose meaningful consequences."]

Matthews: "What cheered his hometown audience triggered a tit-for-tat. It won an immediate response from Iran amid a delicate meeting of the International Atomic Energy Agency, quote, ‘The United States may have the power to cause harm and pain but it is also susceptible to harm and pain.' So if the United States wishes to choose that path let the ball roll.' Is this how wars start? Our leaders beat their chest at home to stir their political base? Their leaders beat their chest to do the same? I don't know the right policy toward Iran and its nuclear ambitions but we can see it's become a matter of national pride for Iranians. International threats in the nuclear age should not be a political applause line. That's the show, thanks for watching. See ya here next week."